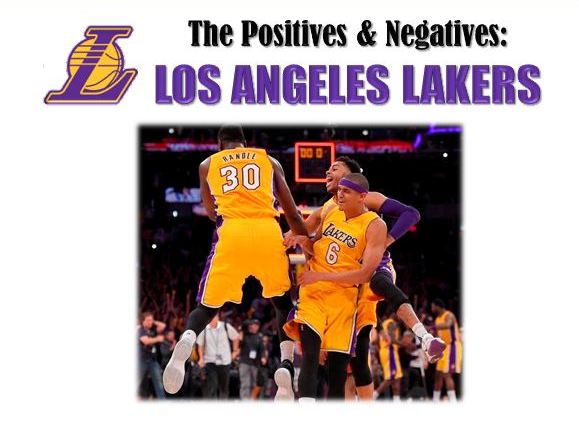 Before the season began, the Los Angeles Lakers were projected to finish with the worst record in the Western Conference with an over/under of 24.5 wins.

Not only are the Lakers currently 7-5 through their first 12 games, but they’re now projected to win double the amount of their over/under number with 47.8 possible wins.

Through four weeks of the season, the Lakers have bought into the fast-paced, ball/player movement offense Head Coach Luke Walton brought from the Golden State Warriors to have a top-10 offense currently. Defense on the other hand is a big part of why they have five losses this season.

Let’s take a deep dive into the positives and negatives of the Lakers through 12 games.

Scoring the basketball & pushing the pace – As mentioned above, the Lakers rank 10th in Offensive Rating, as they’re scoring 107.1 points per 100 possessions, they’re second in putting points on the board (110.0 points per game), and they keep the defense on their heels by continuing to push the pace. The Lakers are 4th in pace with 102.82 possessions per 48 minutes, while they’re dangerous out on the fast break, where 16.7 of their points come from each game (ranked 6th in the league for transition points).

Pushing the pace has a lot to do with the personnel on the floor. In their starting lineup of D’Angelo Russell, Nick Young, Luol Deng, Julius Randle and Timofey Mozgov, the Lakers have four ball handlers in that lineup who can run the break and initiate the offense. The starters are scoring 112.6 PP/100 in 156 minutes, which is just a notch below the league best offense of the Warriors.

With the bench unit, the scoring dips just a bit to 107.8 PP/100, but that’s still a top-10 number. The unit of Lou Williams, Jordan Clarkson, Brandon Ingram, Tarik Black, and Larry Nance Jr. also has four players who can bring the ball up and initiate the offense as well. That second unit is outscoring opponents by 18.9 PP/100 when on the floor together so far in 81 minutes, and that has to do with their defensive numbers being a bit better facing bench units.

While the Lakers have some holes defensively, they can be very active and put pressure on offenses, as they’re turning teams over 15.2 times per game (7th best) and turning those turnovers into points on the other end (18.5 points off turnovers, 5th in the league).

In the half court, the Lakers don’t have the type of team where one player constantly dominates the ball, because as you look at the usage percentages of their 10 core players, the usage numbers are very much balanced, which means multiple players are playmakers with the Lakers throughout the course of a game.

Making shots is also something the Lakers do at a top-5 level, as they’re knocking down 47.2% of their field goal attempts (3rd in NBA). The Lakers do take a good chunk of 3-pointers (27.3, 10th in attempts), but as a team, they shoot just 34.5% from the outside, slightly below league average (18th).

The Lakers can also put pressure on defenses, as they score the 5th most points in the paint per game (46.8 points). The Lakers don’t get all the way into the teeth of the paint, as only 26.1 of their attempts come from the restricted area, but they do get in the vicinity of the paint, where they take 14.2 non-restricted area shots per game (4th). The Lakers try to stay away from mid-range shots unless that’s the only shot being provided (18.5 mid-range jumpers per game, 18th in the league).

Russell’s 3-point versatility – Through 12 games, Russell is attempting 6.4 threes per game and shooting above league average, by knocking down 39.0% of those looks. In the video clip below, you can see how Russell’s ability to knock down 3s in a variety of ways makes it tough for defenses to guard him. If they go under screens, he’s getting a wide open look, if they go over or switch, then he has a mismatch with a big or he can penetrate the lane to kick out to a shooter or try to finish at the rim.

The video showed Russell’s 3-point variety, as he knocked down spot-up shots, pull-up and shots off screens, set shots from the 1-2 shooting formation and the hop formation.

Randle’s passing ability – Randle is dangerous in that not only can he score and rebound, but he can throw a variety of different passes on the money in all sorts of situations. Randle is currently second on the team in assists per game with 3.8 dimes a night, and as the video below shows, he can deliver passes by reading who is open on his team from above the arc, he can initiate the offense in full stride off a defensive rebound, he can drive and kick like a guard in the half court, and when he’s posting up, he can find shooters or cutters for easy points.

Turnovers – While there’s a lot of positives with the Lakers’ offense, the one key negative element has to be the turnovers. They’re currently 25th in turnovers per game by coughing the ball up 16.8 times a night. Those turnovers lead to 19.4 points (27th in NBA) on the other end for the opposing team, and it’s a big part of why the Lakers’ transition defense has trouble (15.8 points for opponents on the fast break, ranked 27th).

Now, due to the fast pace that the Lakers play at, a high amount of turnovers are almost inevitable, as last season’s Warriors were one of the 10 worst teams in turnovers per game. It just happens. However, since it’s only November and the Lakers have played just 12 games together, as the season progresses and the players develop more chemistry and cohesion on the floor, those turnover numbers should begin to slightly decrease.

Defending the paint – The Lakers are dead last in opponent points in the paint (50.8 points per game), as team’s are getting into the restricted area 32.1 times per night (30th) and shooting 65.7% at the rim when they’re in there (30th). Some of the high opponent points in the paint has to do with the Lakers’ style of play. When you run and gun, you’re going to end up giving away easy baskets at the rim. But, the other part of this has to do with the Lakers’ personnel. While Mozgov and Nance Jr. are tall dudes, they’re just not elite shot blockers and they don’t really make drivers alter their shots. Then, at the 4, you have Randle and Black, who are both a bit undersized when compared to traditional power forwards in the league.

Other Defensive Issues – Overall, the Laker ranks 19th in the league in defense, as teams score 105.4 PP/100 against them. With allowing teams to score near the rim, the Lakers are ranked 28th in opponent field goal percentage (46.5%). Teams can also drive and kick out against the Lakers’ defense, as they’re allowing 27.0 opponent threes per game (21st), but, they’re doing a decent job contesting those outside looks, as teams are shooting below league average from three against the Lakers’ defense (31.8%, 2nd lowest in NBA).

The Lakers also don’t help themselves out on the defensive end when they foul opponents. Teams are getting to the free throw line 25.5 times per game (23rd) against the Lakers.

As mentioned above, limiting their turnovers on offense should help the Lakers’ defense get a bit better because they won’t be giving away as much transition points. Limiting the number of fouls per game is also something the team themselves can do their best to control. Defending the paint looks to be the long term issue for the Lakers’ defense this season, and barring any roster moves for a defensive center, rotating quicker when someone is attacking the rim and covering for each other can be something the Lakers can work on to try to ease the amount of paint penetration by opponents.

Considering this is only year one for Walton and this young core of players, the future looks bright for the Lakers going forward. Just based off observation, if you go back and watch their victory over the Warriors earlier this season, just watch how calm and comfortable the Lakers looked in that game, even when things got tight and the Warriors started creeping back into the game late. That, is a good sign of a team on the rise.