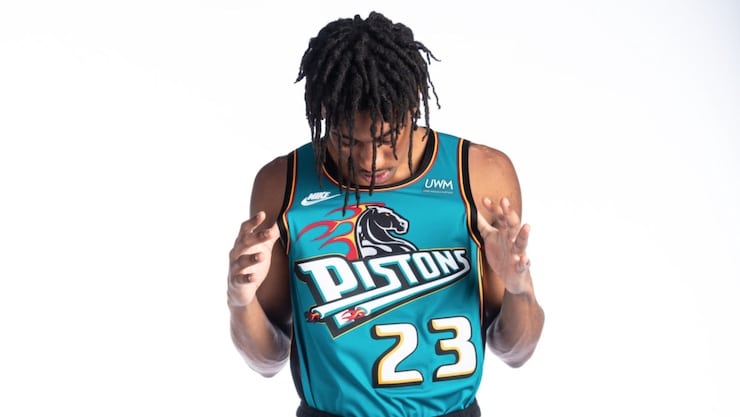 The Detroit Pistons’ teal blue jerseys will make their return to NBA courts this season for the first time in 21 years.

The Pistons unveiled their “new” Classic Edition uniforms, a replica of the road uniforms that the team wore during its glory days with Grant Hill between 1996-2001.

Aside from Hill, many of the Pistons’ standouts over the years have donned the teal horsehead threads, including Jerry Stackhouse, Lindsey Hunter, and Ben Wallace.

Check out the official launch video below.

The jerseys were presented during a launch party on Monday night at Highlands Detroit, which is located at the top floor of the GM Renaissance Center. Former Pistons’ star Jerry Stackhouse, who began his career in Detroit’s teal jerseys was in attendance.

The team is expected to showcase the Classic Edition uniforms for approximately 10 games during the upcoming season as part of their 2022-23 uniform rotation.

In the iconic teal blue jerseys, the Pistons regained their identity from the Bad Boys Era and clinched postseason berths on three separate occasions.

“To Pistons fans everywhere – we heard you, and this is for you,” said Mike Zavodsky, Chief Business Officer for the Detroit Pistons. “The teal jerseys represent a ‘colorful’ time in Pistons basketball and NBA history. We are thrilled to re-introduce the teal to a new generation of basketball fans, and can’t wait to see this version of Detroit Basketball suit up in them.”

While fans in Detroit were once divided over the style of the uniforms, the Pistons’ teal jerseys have achieved cult-like status over the years.

However, the allure of the Pistons’ teams during that era haven’t aged quite as well. In fact, the era was marred by plenty of disappointments, which included the departure of Hill, the team’s franchise player at the time.

While the sign-and-trade that sent Hill to Orlando marked the end of an era, it also brought in one of the most important trade hauls in Pistons’ history.

In return for Hill, the Pistons received a pair of undrafted players, Ben Wallace and Chucky Atkins. Once thought to be an expiring contract, Wallace eventually became a defensive stalwart with the Pistons, winning four Defensive Player of the Year awards and helped lead Detroit to an NBA Championship in 2004.