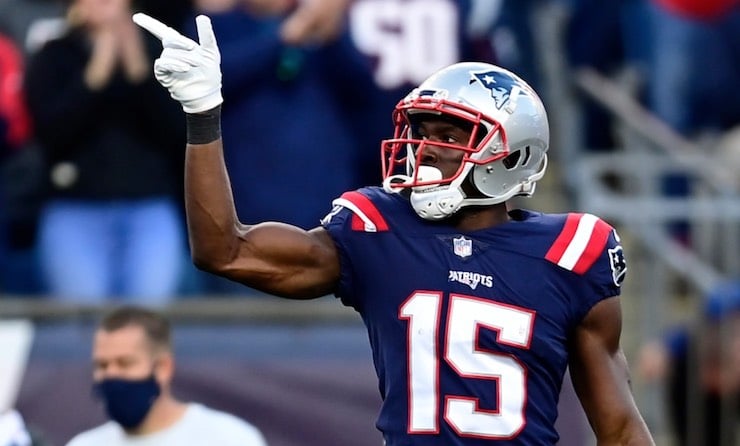 New England Patriots wide receiver Nelson Agholor had one of the best moments of the day at NFL training camp on Tuesday.

Agholor made a beautiful one-handed grab over a defender in 1v1 drills.

The one-handed grab drew quite a reaction from the crowd of fans in attendance.

Check out Agholor’s one-handed catch below.

Agholor has had himself quite the day today pic.twitter.com/gTQ1uh5GV5

A former first-round pick, Agholor knows talent when he sees it.

After the Patriots’ practice, he praised the team’s wide receiver group and their ability to make plays.

“I’m just competing and having fun,” Agholor said after practice. “We have a really good group.”

Agholor appeared to be competing at a high level on Tuesday after muscling off Joejuan Willians to make a one-handed grab.

He held off Williams with his left arm and hauled in the pass with his right, drawing a

Nelson Agholor on the changes to the Patriots offense pic.twitter.com/YitpAfteAY

With Mac Jones entering his second season under center, the 29-year-old could be poised for a big year.

Before joining New England a season ago, Agholor posted a career-high 896 yards and eight touchdowns in 2020 as a member of the Las Vegas Raiders.

During the spring, rumors swirled that Agholor could be on the trade block but a strong camp seems to have cemented his spot on the Patriots roster.

That combined with some real progress from Jones in Year 2 should help propel Agholor to a big year in the Patriots offense.