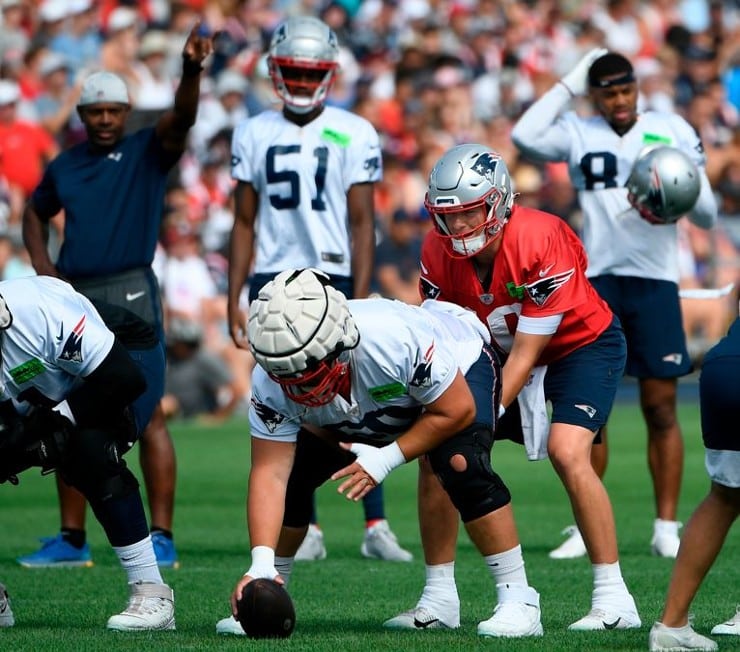 The New England Patriots once had one of the most dominant offenses in the NFL, but now reports are coming out that the offense is underperforming at practice. Last season, the Patriots offense exceeded expectations, especially with rookie quarterback Mac Jones. Then again, they had offensive coordinator Josh McDaniels.

The Patriots ranked sixth in team offense, 14th in passing, eighth in rushing and sixth in scoring offense. New England averaged 27.2 points per game. This was also without quarterback Tom Brady. Let that sink in for a minute. While the team still struggled without the seven-time super bowl champion, at least they finished 10-7.

Patriots No. 1 offense today has been distressingly bad. Run stuffs. Aborted plays. Would-be sacks. Distress lobs into traffic just to get ball out. Beginning to feel it’s less the new offense and more the post-Scar cycle of OL coaches. They are perpetually overwhelmed.

Maybe their ceiling without Brady is 10 wins. Now, there’s an increased chance of the Patriots not even sniffing the playoffs in the upcoming season. A new system has been implemented. Keep in mind, 2022 is Belichick’s 23rd season coaching the team. Has the genius lost a few steps? More than a couple fans think so.

Belichick selected guard Cole Strange 29th overall in this year’s draft. Another lineman is good for roster depth. However, Strange still would have been on the board in the second and third rounds. Strange was not a projected first-round prospect. How did this move benefit the defense?

Signs of frustration from Mac Jones, Damien Harris and David Andrews today. Andrews had the offense huddle up and spoke to them for an extended period when the workout had finished. Lots to iron out. https://t.co/XkxHQhJs6S

Not to mention, while trading defensive back Stephon Gilmore to the Carolina Panthers last year made sense, Belichick not re-signing J.C. Jackson this offseason was a bit questionable. Through 17 games in the 2021 season, Jackson made eight interceptions, with one of them being a pick-6.

In other words, now it seems the Patriots secondary is vulnerable. Fans witnessed their defensive struggles in the 2022 AFC Wild Card game. The Buffalo Bills pounded them 47-17. And the final score could have been even worse. The Patriots scored a last-minute touchdown during garbage time.

Will the New England Patriots offense recover without Brady and McDaniels?

So, what’s the problem right now? Well, according to multiple sources, Belichick is attempting to move the offense into a zone-blocking scheme. Though, the offensive line is getting pummeled by defenders. Approaching mid-August, this is not a good look.

Furthermore, the Patriots quarterbacks are not getting enough time to let plays develop. The team is in training camp right now, but it’s also Matt Patricia’s first season calling plays as the Patriots offensive coordinator. Receiver separation is also vital.

Everything I saw on Day 11 of Patriots training camp:

-At long last, a better day for the offense
-A change to the top O-line pays off
-Pierre Strong climbing the depth chart
-A big ol' practice fight

After Day 11 of the Patriots’ training camp, Patriots beat writer Zach Cox liked what he saw. But be aware of biases from New England writers and reporters. Some are overcritical of Belichick’s team each season, whereas other media personnel borderline on delusional.

Based on the Patriots’ 2022 schedule, they are playing NFC North and AFC North opponents this season. They have unfavorable matchups against the Packers, Bills, Colts, Cardinals and Bengals. Matt Ryan is also now with the Colts. This should be interesting.

Without Tom Brady and Josh McDaniels, this season will be the ultimate test for Belichick. The 70-year-old coach has not won a playoff game without TB12 since coaching the Cleveland Browns. And that was the 1994 AFC Wild Card game against the Patriots. The Browns defeated them 20-13.

For their preseason opener, the Patriots play the New York Giants tomorrow on Thursday at 7 p.m. ET. The game will air live on NFL Network. More news stories about the New England Patriots are on the main page.