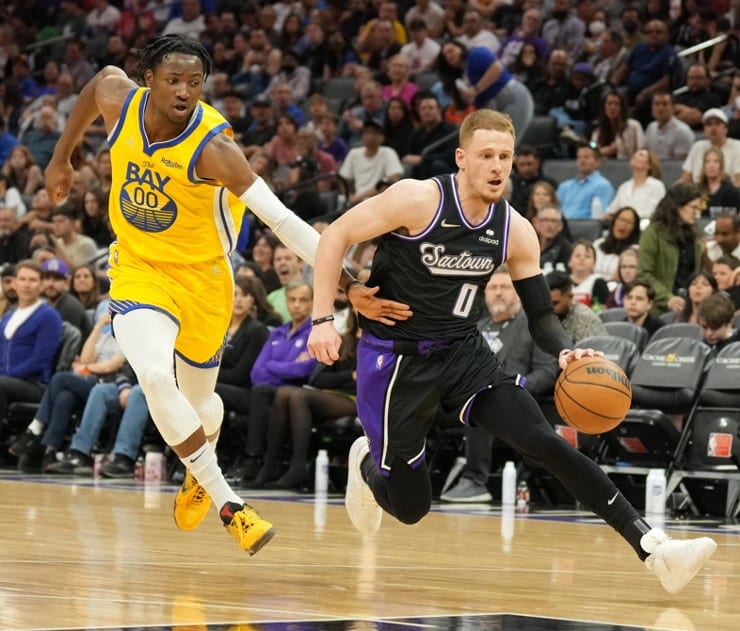 Donte DiVincenzo has agreed to a two-year, $9.3 million contract with the Warriors. DiVincenzo has a player option in the second year of this deal. This news comes after Gary Payton II signed with the Trail Blazers and Otto Porter Jr. left for the Raptors. After losing two key defenders, Warriors G.M. Bob Myers might have discovered gold with this guard.

Moreover, the NBA champ averaged 10.3 points per game with the Kings in only 25 games played. Although it’s just a small sample size, the last time DiVincenzo averaged at least 10 points per game was back in the 2020-21 season with the Bucks.

Is Donte DiVincenzo a solid replacement for Gary Payton II?

Moreover, in a total of 71 games played last season, Gary Payton II averaged 7.1 points, 3.5 rebounds and almost 1.0 assist per game. More importantly, the guard averaged 61.6% shooting from the floor. Of course, his scoring finish was a career high.

While Payton II is a more accurate shooter, DiVincenzo still averaged more points, rebounds and assists in the 2021-22 season. Though, DiVincenzo has missed quite a few games of his NBA career due to injuries. In his rookie season, he was out for most of the games because of a foot injury.

Plus, the guard suffered an ankle injury during the playoffs in 2021. If Payton II can have a career-high season with the Warriors, maybe the new guy will follow suit. Coach Steve Kerr has developed an excellent system in the Bay Area. The Warriors won their fourth championship in eight years, and the team could very well make another return next season.

How does the guard compare to Otto Porter Jr.?

Similar to Payton II, Otto Porter Jr. is a more accurate shooter than DiVincenzo. Indeed, this is based on last season’s performance. In a total of 63 games played in the 2021-22 season, Porter Jr. averaged 8.2 points, 5.7 rebounds and 1.5 assists per game. He averaged 46.4% from the field shooting and 37% from downtown.

Nonetheless, Porter Jr. has declined offensively over the years. He has not averaged at least 14 points per game since the 2017-18 season with the Wizards. And some might argue that his time spent on the Bulls led to a negative turning point of his NBA career.

He had to sit out due to a lingering left foot injury. So, DiVincenzo’s impact on the Warriors will depend on whether or not he can remain healthy. All three players are hit or miss.

For the most part, Porter Jr. added depth to Golden State’s backcourt last season. If the coaching staff can work on helping DiVincenzo to improve his shooting, the guard could also display standout performances next season. Other articles related to Donte DiVincenzo are on the main page.