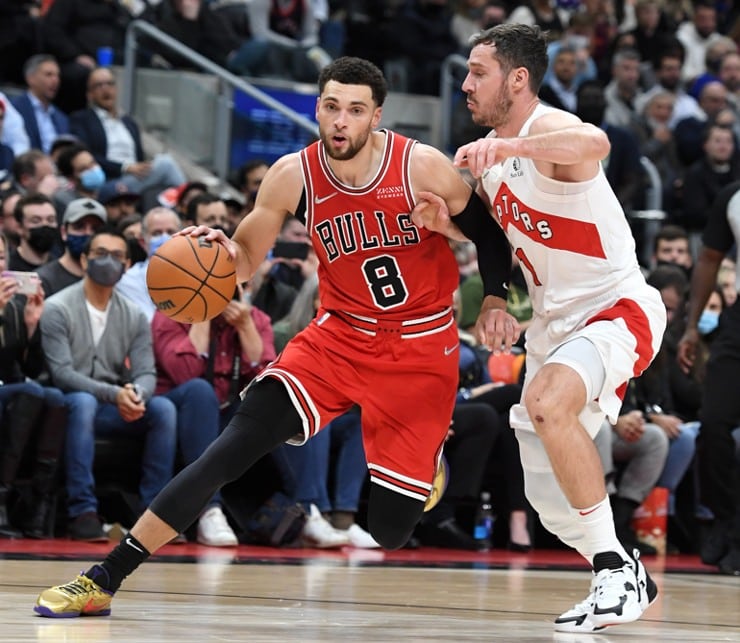 Goran Dragic has agreed to sign a one-year, $2.9 million contract with the Bulls. Per sources, Dragic’s salary is part of the mid-level exception. On Saturday, Zach LaVine re-signed with the Bulls on a five-year, $215 million max extension. Before the 2022 NBA Playoffs, the Bulls ruled out Lonzo Ball for the remainder of the season due to a knee injury.

With Dragic, the team now has more depth in their backcourt. In addition to LaVine and Dragic, they have Alex Caruso, Coby White and Ayo Dosunmu. In a total of 21 games played in the 2021-22 NBA season, Dragic averaged 7.5 points, 3.1 rebounds and 4.1 assists per game. He finished shooting 37.7% from the field and 25.4% from 3-point range.

Furthermore, the 15-year guard has been on three different rosters over the last year alone. On Aug. 6, 2021, along with Precious Achiuwa, the Heat traded Dragic to the Raptors for Kyle Lowry. Then, on Feb. 10, the Raptors traded the guard and a 2022 first-round draft pick to the Spurs for Drew Eubanks, Thaddeus Young and a 2022 second-round draft pick.

Of course, then Dragic was waived by the Spurs four days later after a contract buyout, and he agreed to sign with the Nets on Feb. 22 for the remainder of the 2021-22 season. On Mar. 16, the guard scored a season-high 21 points in the Nets’ 113-111 loss against the Mavericks.

Goran Dragic made an impact in the playoffs last season

During the playoffs last season, Dragic averaged 10.5 points, 4.5 rebounds and 1.5 assists per game against the Celtics in the Nets’ first-round playoff series. In Game 2, he scored 18 points in his team’s 114-107 loss to Boston. Therefore, the guard definitely could have helped a shorthanded Bulls team this past postseason.

Moreover, in the 2021-22 regular season, the Bulls finished 46-36 (.561). They ranked sixth overall in the Eastern Conference. In April, the team clinched a playoff spot for the first time since the 2016-17 season, ending their five-year playoff drought.

Though, LaVine, Nikola Vucevic and DeMar DeRozan were not enough to compete with the Bucks in the first round. They were eliminated in five games. DeRozan scored a team-high 41 points in the Bulls’ 114-110 win over the Bucks in Game 2.

While Dragic had an above-average performance against the Mavericks last season, his shooting accuracy has declined over the years. His best shooting over the past five years occurred during the 2016-17 season, when he averaged 47% from the floor with the Heat.

Additionally, Dragic is 36 years old. If he can stay healthy with Chicago, the team should advance deeper into the playoffs next season, along with Lonzo Ball playing with him at full strength as well. Dragic will be an effective guard for the Bulls coming off the bench.

Needless to say, he’s had a long playing career. The Slovenian earned his first and only All-Star selection of his NBA career in 2018. Plus, Dragic was selected 45th overall by the Spurs in the 2008 NBA Draft, but he was traded to the Suns a couple of days later. Other news related to Goran Dragic is on the main page.