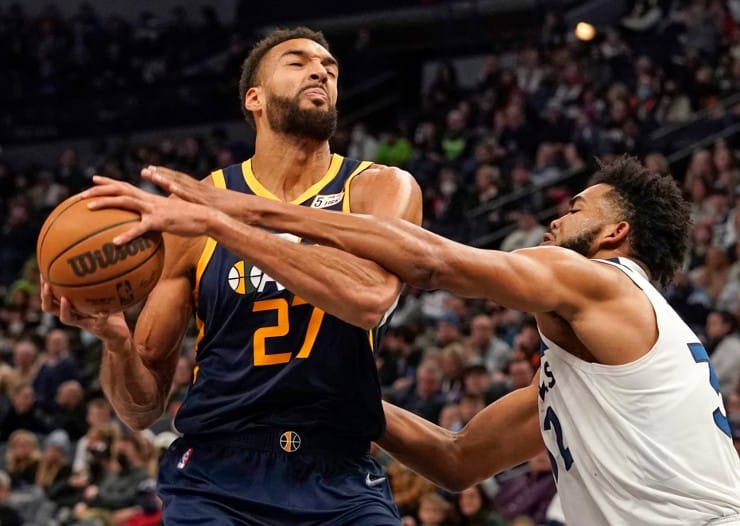 Rudy Gobert has been traded to the Timberwolves for four first-round picks, Malik Beasley, Patrick Beverley, Walker Kessler and Jarred Vanderbilt. According to the five-year, $205 million contract that Gobert signed in 2020, he now has four years and $140 million remaining on this contract.

In the 2021-22 NBA season, Gobert averaged 15.6 points, 14.7 rebounds, 1.1 assists and 2.1 blocks per game in 66 games played with the Jazz. For the first time of his professional playing career, the center led the NBA in rebounds last season. And he received his sixth NBA All-Defensive First-Team selection.

In the 2022 NBA Playoffs, Gobert averaged 12 points, 13.2 rebounds and nearly 1.0 assist per game against the Mavericks in the first round. In the Jazz’s 99-93 win over the Mavs in Game 1, the center ended his performance with 17 rebounds in 35 minutes played.

Did the Timberwolves overspend to acquire Rudy Gobert?

Furthermore, Rudy Gobert will help the Timberwolves improve their rebounding and defense. But why did Tim Connell, the team’s president of basketball operations, give up four first-round draft picks and Walker Kessler? Kessler was selected 22nd overall by the Grizzlies in the 2022 NBA Draft. Though, his draft rights were immediately traded to the Timberwolves.

Also, there was a rumor months ago that pertained to Minnesota’s front office trading D’Angelo Russell. Now, it looks like Russell is here to stay. The guard averaged 18.1 points, 3.3 rebounds and 7.1 assists per game last season in 65 games played.

However, the Timberwolves now have both Gobert and Karl-Anthony Towns. In the 2021-22 season, the team ranked 14th overall in total rebounds, averaging 52.2 total rebounds per game. To add to that statistic, Minesota ranked third in team blocks per game (5.7).

Now, they will become even better in the paint defensively. Coach Chris Finch is thrilled with this trade from a defensive perspective. Therefore, the Timberwolves did overspend for Gobert, but this blockbuster trade could pay off for them in the long run.

Last season, the team finished 46-36 (.561) overall, and Minnesota ranked seventh in the Western Conference. They went on to lose to the Grizzlies in six games of the first round of the playoffs.

The Jazz are set for the future

Additionally, the Jazz now have five more first-round draft picks. They also have Malik Beasley, Patrick Beverley, Walker Kessler and Jarred Vanderbilt. This is a lot to unpack. Per multiple sources, the Jazz plan to keep Donovan Mitchell. The front office aims to build around their three-time All-Star guard. Anyway, Beasley averaged 12.1 points, 2.9 rebounds and 1.5 assists last season with the Timberwolves.

As for Beverley, the soon-to-be 34-year-old is on the downside of his NBA career, but the guard still averaged 9.2 points, 4.1 rebounds, 4.6 assists and 1.2 steals with Minnesota last season. It was the first time since the 2017-18 season that Beverley averaged at least nine points per game.

Lastly, Jarred Vanderbilt put up career-high numbers in the 2021-22 season. He made 74 appearances in the regular season and started in 67 of those games. The guard averaged 6.9 points, 8.4 rebounds, 1.3 assists and 1.3 steals per game. The fifth-year player is only 23 years old. Some would say that Minnesota lost one of their most improved players.

After this trade, the Jazz have Udoka Azubuike left at center. He was selected 27th overall by Utah in the 2020 NBA Draft. Azubuike is not enough though. Perhaps Kessler at 7’1″ will be a successful center in the NBA. Ideally, one could imagine that Danny Ainge has his sights set on signing a veteran center during free agency this summer. Other news articles concerning the Gobert trade are on the main page.