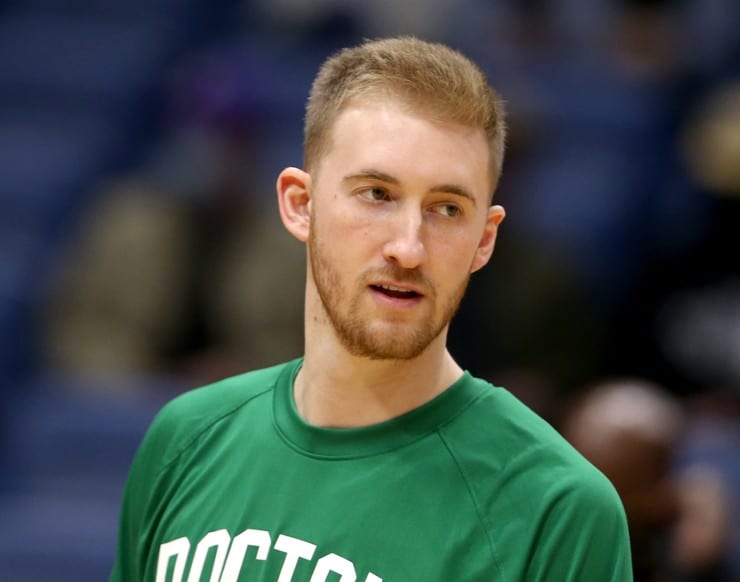 Sam Hauser has agreed to re-sign with the Celtics on a three-year, $6 million deal. Hauser’s minimum salary for this contract is set at $5,658,206. According to Adam Himmelsbach of The Boston Globe, head coach Ime Udoka wants to give the forward more playing time next season.

“Internally, there’s real optimism that Hauser can become a regular rotation player next season,” explained Himmelsbach. “The first two years of the deal are fully guaranteed.”

Then, Gallinari was waived by the Spurs and Landale was traded to the Suns. Anyway, in a total of 26 games played in the 2021-22 NBA season, Hauser averaged 2.5 points and 1.1 rebounds per game.

Sam Hauser works to improve for his NBA sophomore season

On Mar. 28, in the Celtics’ 115-112 overtime loss against the Raptors, the forward scored a then season-high 10 points in 21 minutes played. He also shot 4-for-6 from the field and amassed five rebounds.

Moreover, on Feb. 13, the forward’s two-way contract was converted into a standard contract. While playing with the Maine Celtics in the NBA G League, Sam Hauser averaged 16.9 points, 5.0 rebounds and 1.9 assists per game in 10 games played. He started in eight games for Maine last season.

After the front office declined Hauser’s $1,563,518 team option for the 2022-23 season, analysts began to speculate that G.M. Brad Stevens wanted older talent. Now, the Celtics are better off with both Hauser and Gallinari. The forward turns 25 this December.

Danilo Gallinari is a solid addition for perimeter shooting

Furthermore, Gallinari is 6’10” and weighs about 240 lbs. If Hauser improves in his second season and Gallinari continues to average double-digit points per game, the Celtics could be an even better team next season. He became one of the best veteran forwards available for 3-point shooting after the Spurs waived him. Gallinari turns 34 in August.

Other news stories and rumors related to Sam Hauser or Danilo Gallinari are on the main page.