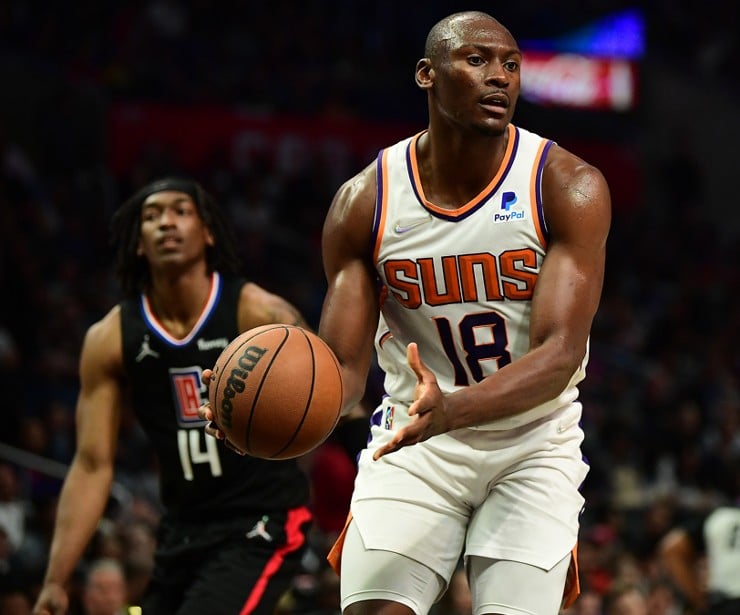 Not only did the Suns re-sign center Bismack Biyombo, but they also traded with the Hawks for Jock Landale. Since JaVale McGee and Aaron Holiday are gone and Deandre Ayton’s future with the team is in jeopardy, Suns G.M. James Jones wanted to work towards adding depth at center.

Coach Monty Williams named Biyombo a starter in late January after Deandre Ayton and JaVale McGee needed time to rest because of injuries. Of course, the Suns went on a 10-game win streak with Biyombo earlier this year. After the Suns witnessed his dominant performance versus the Spurs, they had to re-sign him for the rest of the season.

While playing for Melbourne United, a National Basketball League (NBL) team based in Australia, he helped his team become NBL champions in 2021, and Landale won NBL Grand Final MVP. Plus, the center was selected to the All-NBL First Team in the 2020-21 season.

Will the Suns make another trade?

In the Spurs’ 101-94 win against the Clippers, Landale recorded his first career double-double on Jan. 15. He amassed 10 points and 11 rebounds. Now, in addition to Biyombo and Landale, the Suns have signed former Timberwolves guard Josh Okogie and ex-Warriors guard Damion Lee.

Will the Suns still trade for Kevin Durant? As the days go by, it seems less likely with each new signing. The collective bargaining agreement complicates an Ayton trade. To add to that, a potential sign-and-trade would exceed the Nets’ hard cap.

Keep in mind, Brooklyn still owes Ben Simmons $34 million. A qualifying offer is a possibility, but Ayton would not be eligible for any trade via Q.O. until mid-December. Other news and rumors related to the Suns’ Bismack Biyombo and Jock Landale are on the main page.