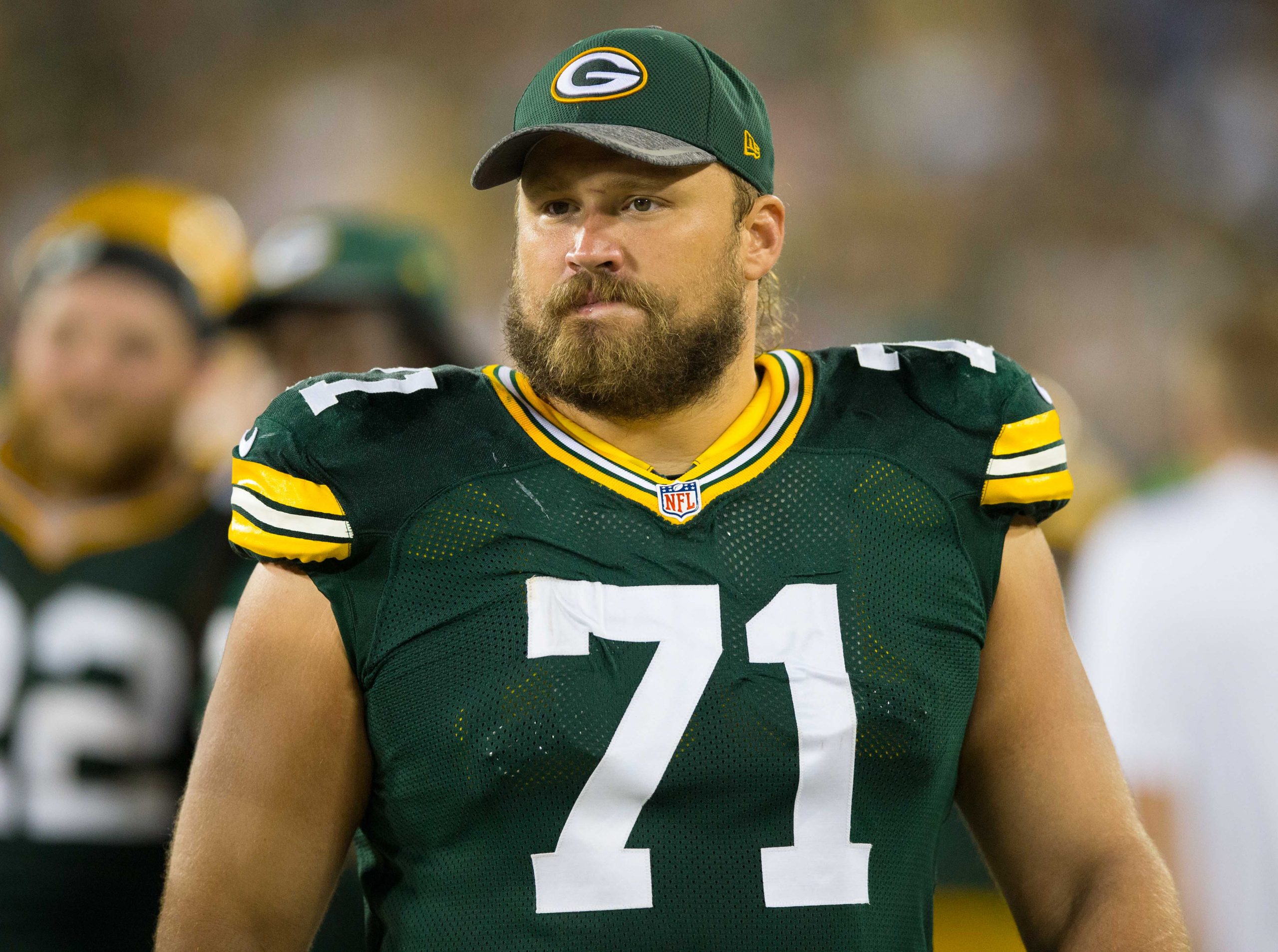 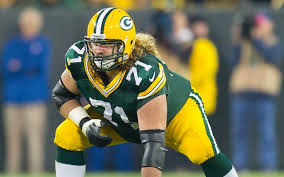 The Packers drafted Josh Sitton in the fourth round of the 2008 NFL Draft. The Central Florida product became a starter in this second season with the club and quickly developed into an elite NFL guard.

Sitton was a key cog in the Green Bay offensive line during their Super Bowl campaign in 2010 and in their 15-1 season in 2011.

Sitton’s strength and toughness made him one of the best guards in the NFL and he was selected to the Pro Bowl after the 2012, 2014 and 2015 seasons.

While he started his career playing right guard for the Packers, he was moved over to the left side in 2013. During his career, he was selected to the Pro Bowl while playing both sides. He even filled in at tackle on an emergency basis when injuries struck along the offensive line late in the 2013 season.

The Packers released Sitton after the 2015 season and he signed with the Bears. He had one more Pro Bowl season in Chicago before injuries slowed him down and forced him to retire after the 2018 campaign. He officially retired as a Packer on April 4, 2019.

Other prominent Packers players to wear 71 include defensive tackle Santana Dotson (1996-2001) who gave the Packers a strong inside pass rush during their run to Super Bowl XXXI and linebacker Bill Forester (1959-63) who served as defensive captain for the Packers late in his career and was inducted into the Packers Hall of Fame in 1974. 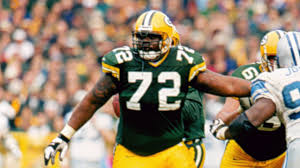 The Packers selected big Earl Dotson in the third round of the 1993 NFL Draft out of Texas A&M-Kingsville.

Dotson became a starter by 1995 and was a fixture at right tackle for the Packers during their Super Bowl winning 1996 season and their return to the big game a year later.

Dotson was a tenacious pass blocker who used his strength and quick feet to mirror opposing pass rushers. He also opened holes for the running game on a consistent basis for the Packers teams of the mid-to-late 90s.

From 1995-99, Dotson was a fixture at right tackle, but then injuries limited him to just two games in 2000. He regained his starting position at right guard in 2002 but was forced to retire after that season because of repeated injuries.

Dotson played in 120 games for the Packers in his NFL career, starting 88 of them. He recovered three fumbles and won a Super Bowl ring in 1996.

Other prominent Packers to wear 72 include offensive tackle Dick Himes (1968-77), a key part of the Packers offensive line in the late 60s and early 70s. 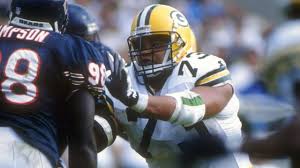 Aaron Taylor spent only three seasons with the Packers but they were eventful campaigns and the former Notre Dame star played in three NFC Championship Games and two Super Bowls with the Pack.

Ron Wolf drafted Taylor in the first round of the 1994 NFL Draft out of Notre Dame. Unfortunately, injuries prevented him from playing in his rookie campaign.

His first active season with the Packers came in 1995 and Taylor immediately started at left guard. Taylor’s ability to maneuver in space and pull on running plays and screen plays was a big asset for the Packers offense.

Taylor was a smart and heady player who knew how to get into the right position to gain leverage against would-be tacklers.

Taylor signed with the Chargers in 1998, but repeated knee injuries cut his career short and he was forced to retire after the 1999 season. He now works as a television analyst covering college football for CBS Sports Network. He wasn’t a Packer for long, but he played at a consistently high level and helped the team win a lot of football games. 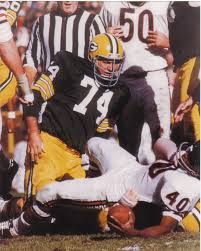 Pro Football Hall of Famer Henry Jordan is responsible for one of the most famous quotes in Packers history. When asked how coach Vince Lombardi treated his players, the wise-cracking Jordan famously answered, “He treats us all the same, like dogs.”

The Packers acquired Jordan from the Cleveland Browns prior to the 1959 season. The Browns got a fourth-round pick in the deal while the Packers got a future Hall of Famer.

Jordan played defensive tackle on all five of Lombardi’s title teams in the 60s including the teams that won the first two Super Bowls. In fact, Jordan was unofficially credited with 1.5 sacks in Super Bowl I against Kansas City.

The former Virginia star earned four Pro Bowl berths and was named All Pro five times during his 11 seasons with the Packers.

Jordan weighed just 248 pounds but had cat-like quickness and the ability to penetrate and get to the ball carrier. He was also a strong pass rusher from the inside of the line.

Unfortunately, Jordan died of a heart attack in 1977 at the age of 42.

Other prominent Packers to wear 74 include defensive end and outside linebacker Aaron Kampman (2002-09) who gave the Packers consistent pass rush during the 2000s and colorful defensive tackle Dave Roller (1975-78) who provided enthusiastic play for the Pack in the mid-70s after coming over from the WFL. 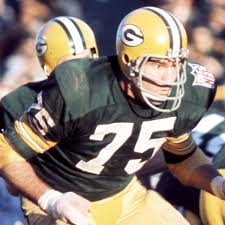 Vince Lombardi gave Forrest Gregg one of the highest ever compliments when he called the former SMU star, “The finest player I ever coached” in his 1963 book, “Run to Daylight.”

Gregg was a second-round pick by the Packers in the 1956 NFL Draft. He established himself as the Packers starting right tackle in 1960 and remained an elite player for the rest of the decade.

The big Texan was selected to play in nine Pro Bowls and was named All-Pro seven times. He played on all five of Lombardi’s championship teams in the 60s and was named to the NFL’s All-Decade Team of the 60s and the 75th Anniversary Team.

After retiring as a player, Gregg became a coach and was named the AFC Coach of the Year in 1976 for helping the Cleveland Browns to a surprise 9-5 record. In 1981, his Bengals team finished with a 12-4 record and a earned a trip to Super Bowl XVI.

Gregg took over as head coach of the Packers in 1984, succeeding former teammate Bart Starr. Unfortunately, his teams struggled and he finished with a 25-37-1 record in four seasons with the Pack between 1984 and 1987. He then resigned to rebuild the football program at SMU which had earlier been given the death penalty by the NCAA.

Other prominent Packers to wear 75 include offensive tackle Bryan Bulaga (2010-12, 14-19) who gave the Pack strong play at right tackle throughout the 2010s and tackle Ken Ruettgers (1985-96) who was a mainstay on the Packers offensive line in the late 80s and early 90s.