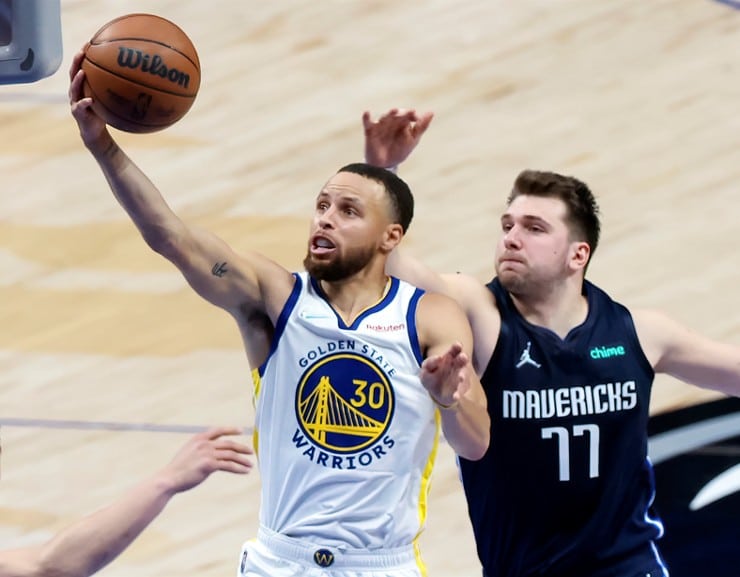 Today on Tuesday, May 24, the Western Conference Finals of the 2022 NBA Playoffs continues; NBA player props, best NBA bets and odds for Game 4 are featured here. Tonight, the Golden State Warriors square off versus the Dallas Mavericks in Game 4 at 9 p.m. ET. The Warriors vs Mavericks contest will air live on TNT.

Leading into Game 4 of the Western Conference Finals, our betting experts have picked the top NBA player prop bets for the Warriors vs Mavericks rematch. On top of the Mavericks winning tonight, will Luka Doncic score a minimum of 25 points?

Not to mention, along with the Warriors winning, can Stephen Curry sink at least three 3-pointers? Will Andrew Wiggins finish with at least six rebounds? Read the predictions below. More NBA player props are on the main page.

Our most agreed upon NBA player prop bet for Game 4 pertains to Mavericks guard Luka Doncic. The three-time All-Star is averaging 34 points, 7.7 rebounds and five assists per game in this playoff series against the Warriors. In Game 1, Doncic finished his performance with 20 points. It was the only game the guard failed to earn at least 25 points in the Western Conference Finals.

Then, Doncic scored 42 points in Game 2. Of course, keep in mind that Dallas has yet to win a game versus Golden State in this series. In Game 3, the fourth-year player put up 40 points. The Mavericks have to win in order for this bet to favor the gambler. Needless to say, if the Warriors complete the sweep, you will lose your money. However, Game 4 is being played at the American Airlines Center. Dallas could win one.

RELATED: How To Watch NBA Playoffs And Stream NBA Game Today For Free May 23

Next, Warriors guard Stephen Curry is shooting 48% from downtown against the Mavericks. Thus far, in all three matchups during this Western Conference Finals, Curry has made at least three 3-pointers. In Game 1, the eight-time All-Star sank three shots from long range. He shot 3-for-9 (33%) from beyond the arc. Then, the guard shot 6-for-10 (60%) in Game 2 from 3-point range.

On Sunday, Curry finished 5-for-10 (50%) from downtown. Unless the Mavericks win by 20 points in Game 4, there’s really no reason for Curry to fall short tonight. Sweeping any team in the NBA playoffs is difficult. So, for that reason, some bettors might choose to skip over this NBA player prop bet. Curry will likely nail a minimum of three 3-pointers, but even an outmatched team like the Mavericks can sneak away with a win once in a while.

Finally, Warriors forward Andrew Wiggins is averaging seven rebounds per game versus the Mavericks in this Western Conference Finals series. In Game 1, Wiggins ended his performance with a total of five rebounds. Then, he closed out his outing with five rebounds again in Game 2. Additionally, the eighth-year player accumulated 11 rebounds in Game 3. And Sunday’s performance was at the American Airlines Center.

Will Wiggins earn six rebounds in Game 4? During the regular season, he averaged 4.5 total rebounds per game. Bettors like what they saw from the forward on Sunday. But duplicating a performance like that in back-to-back road games is a tall order. In the end, think about taking the under for this NBA player props bet. More NBA player props today for May 24 are on the main page.