Seeing as though we’re only a little more than a week away from the regular season, it’s probably about time to start previewing things. This year we’re going to go division-by-division, starting with the Atlantic. Because everyone knows it’s the best. Or at least the only one that matters.

Where else to lead off but with the defending Eastern Conference champs, the fuel for a lot of debate during the summer. The debate has been beaten into the ground about as bad as the Bulgarian women’s hockey team (Ba-dum-bum. Thank you, thank you! I’ll be here all week!), so I won’t bother to bore you with it. There’s no reason to go over all of that again. Instead, please accept the following as consolation.

Questions that Need Answering: Can they repeat last year even with a different set of mid-level and role players? Is Malkin recovered from his playoff cold streak? Can MAF have another stellar year? Will everyone finally realize that Hossa was not important to the regular season success of this team last year?

The Rangers come into this season much like they did the last — a couple big time free agent signings and a lot of holes on defense. Outside of a Redden and Rozsival, there isn’t much of a backline. Lucky for them that they still have King Henrik. The forwards look a bit different, with the most significant change being the departure of Jaromir Jagr for Russia. Tom Renney is still behind the bench and, if you were wondering, the Knicks are still going to suck.

What’s New: No more Jagr, Avery or Straka. Shanahan is still in purgatory. Naslund, Redden and Kalinin are the big additions to the Garden.

Questions that Need Answering: Is this defense going to be capable of not letting Lundqvist hang out to dry for 82 games? Can Jagrs shoes be adequately filled? What kind of shoes can Redden buy with $6.5 mil? 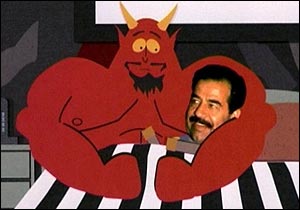 The Devils are coming off a year where they surprised the heck out of a lot of people, finishing third in the division in points. Despite that, Lou Lamoriello decided that he needed to jump in a time machine and take his team back to it’s glory days. He signed former Devils Brian Rolston and Bobby Holik although Ken Daneyko could not be lured out of retirement. Greg Wyshynski, however, is still available.

What’s New: Ex-Devils return (Holik, Rolston). Re-signed a whole bunch of players. Not much else to talk about here.

Questions that Need Answering: Will people lay off Marty Broduer because the guy proved that he can still play? Will Bobby Holik, you know, remember how to play decent hockey? Is it really that hard to believe that this group of guys will challenge for the division again this year? (Yes, it is.)

Last season, the Flyers pulled a massive 180-degree turn by making it to the playoffs after finishing last in the NHL the previous season. This year they play to turn things right around and lose all 82 games. Not really, but that would be hilarious if they tried it. In other news, lets start a pool on how long it will take a Flyer to get a massive suspension. I’m going to go with five days.

Questions that Need Answering: Was that really Mr. Feeny during the playoffs? (I refuse to let that go.) Can the dancing orange shirt guy be utilized as a mascot? Talking about the Flyers makes me queasy, so can I stop now?

Ah, yes. Saving the best and possibly craziest for last. As I’m sure you’ve heard, things went sour for Ted Nolan and the Isles last spring. After a long, drawn out divorce the team has a new coach and a whole bunch of fresh faces. Like last year, nothing is expected out of this team. Two goals for this year; hope the kids show some spunk and get the Lighthouse Project through already.

Questions that Need Answering: Is this team going to have to pay their fans to watch the games? How much legal hot water is owner Charles Wang in, if any? Will Wade Dubielewicz be hired to replace Garth Snow at the end of the season?