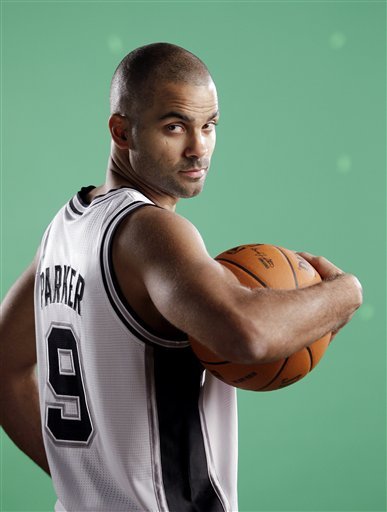 Spurs guard Tony Parker’s name has been mentioned in trade rumors all summer.  Even throughout draft week, many warned that he may be wearing another team’s colors by the end of the week.

Parker went on the record today from Spurs media day to set the record straight.

“I just want to focus on this season,” Parker said. “I can’t control you or anybody else in the media, can’t control what their going to say, inventing stuff that my wife said. I had a great conversation with Pop and I’m ready to go.”

With his impending free agency, rumors have been swirling about Parker possibly joining the New York Knicks, but according to him, he has no intention on changing area codes this summer.

“I’ve said that plenty of times but nobody listens, they just want to create stories, it sells better,” Parker said. “I just hope Spurs fans know I want to stay here.”

While he is clear about wanting to stay, the nine-year NBA veteran didn’t answer either way when asked about his choice of either signing an extension or testing the free agent waters next summer.

“We’ll see, we’ll see. For now I just want to focus on the team,” Parker said. “If the Spurs want to do something, I’d be willing to listen obviously, but well see, it’s a long way.”

Parker will be answering similar questions all season long. Just a year ago, it was Spurs guard Manu Ginobili who was answering those questions before he signed his multi-year extension in April.

Ginobili’s example will be one that Parker hopes to follow during his contract year, not to mention heeding his advice.

“Basically just focus on the team and what Pop’s saying and the next play and the next game,” Parker said on Monday. “I had plenty of conversations with Manu.”

While there’s been a media circus this offseason from the LeBron James decision to the latest Carmelo Anthony trade scenarios, you’re not bound to see that from Parker.

Last season, Parker missed 26 games due to injury. While most Spurs fans were ready to hand him the keys to the organization after a 2008-09 campaign in which he averaged 22 points and 6.9 assists per game, now there is talk on whether or not he is on his decline after a decrease in his numbers across the board.

So does Parker have something to prove, both to himself and the naysayers?

“Yea definitely a little bit to a certain extent. I missed twenty games, the most games I’ve missed in my ten years in the NBA,” Parker said. “I played great in 2009. I want to go back to my level in 2009.”

“You miss five games and they think you retire,” Parker said. “It was the same thing with Manu. Everyone wanted to get rid of Manu last year and that’s crazy, you can’t get rid of Manu. Manu is one of the best players in the NBA.”

Parker was recently on record saying this season was the Spurs’ last chance at a winning a title with the big three, and today, he seemed optimistic about the Spurs’ chances.

“I think we’re more hungry and everyone’s rested. We have a better bench,” Parker said. “Tiago Splitter is ready to play. He won everything in Europe and he’s coming here a little bit like Manu when he came with a lot of experience.”

“I like our chances, we just have to stay healthy and see what happens.”

It all starts tomorrow with the first day of training camp. Project Spurs will be there, so be sure to check back for posts throughout the day.