Because I think we can all agree they don’t work anymore: And it will make Chris Kluwe happy, because he also hates them, and he’s probably the only player on this team that doesn’t suck golf balls through a straw at this point. The Vikings rolled into Chicago yesterday on a brisk autumn afternoon. Back home, the season’s first sloppy snow fall had touched down, and was a harrowing vision of things to come; cold, damp, lifeless, uninteresting … and I’m not just talking about Brett Favre’s penis. That was all we saw from the offense as they eventually farted around for 60 minutes, wracking up an impressive 13 points in their eventual 13-27 point loss. Two touchdowns. Fucking ouch. Much like other people, I was excited for this game to start, because after Arizona’s miraculous come back by this team, I thought they maybe figured it out. Everyone was playing with fire and purpose. The defense was BACK baby! But as soon as Cutler had time to take his watch apart in the pocket and orchestrate an 11 play drive for a touchdown, we knew it was over. Oh, sure, Husain the Terrorist had an interception early, and the Vikings even had two separate leads in the first half, but we all had to know, right? The defense still looked lost, and offense enjoyed sitting on the sidelines for the entire game, and Harvin re-aggravated his ankle injury (and almost fumbled) in the second half again. I’m not even joking, if the Wolves would have been on television, I would have found much more thrill in watching them lose by six to the Hawks than this debacle.

There’s not a ton to say about this team at this point. I feel like this was the last game that they maybe could have redeemed themselves in, the last game they maybe could have turned things around, even if it was just for like two more weeks to get to .500 or something, but now they can’t even sell hope. They’ll end up like 6-10 probably, 5-11, and not get a good enough draft pick and we’ll be stuck in a cycle of mediocrity for ten more years. Favre will retire, we’ll let Greenway and Leber walk in FA, and we’ll become the Dolphins. Sick. 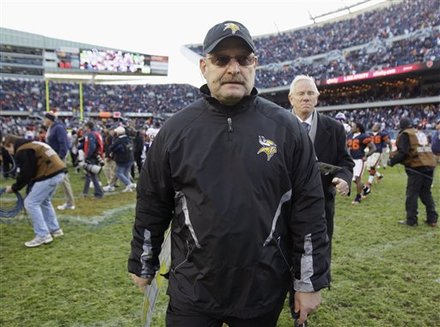 The worst part is you can’t blame Childress: Pfffffffffffffuuuuuuuuuuuuck I don’t even know who to blame this game on. I just think this team isn’t very good. Injuries have hit the Vikings pretty hard in 2010 and it’s really thinned the ranks. Are they any better with Sidney Rice out there all year? If plays does he help out? If Sullivan stays in does the offensive line show some intelligence (he went to Notre Dame you know, like a midget leprechaun)? We’ll never know. I DO know that the Vikings have just had some bad breaks this season. And we can all hate Brad Childress for a whole lot of shit, but this loss wasn’t on him. I mean, do you think he was sitting there all week in his office saying to himself “Yes, I do believe that a trio of receivers in Camarillo, Lewis, and Baskett will serve us well when we’re trying to make up a two score come back”. I mean, MAYBE he thought that, but I doubt it. And the defense played well enough for the most part. They sucked on third downs, and that’s a bit on Frazier’s play calling, but they held Forte under 100 yards and Cutler to 230 with two interceptions. But this is definitely one of those situations where everyone’s to blame, from Childress to d to Hutchinson to the bell hop at the hotel, to the chef who made their dinner last night, to God for the snow storm before they left … I mean, the list goes on and on. However …

Your draft pick update: With the season effectively over for the Vikings, it’s never too early to start looking at the 2011 draft, assuming there WILL be a draft, and not a fucking lock out that will ruin my NFL fun. Each week I will provide you with an updated draft pick list stopping at the Vikings, as well as my favorite for whom the Vikings will pick based off of team need and availability.

To start this week we see the Vikings would project to being around the 10th pick. This totally isn’t the proper draft order, because there’s a lot of teams with the same record, but I’m projecting a bit based on how good some of these teams look despite the record. Actually … I should probably then put Cleveland behind us. They would whoop our ass right now. However, looking at these potential teams I do see some opportunity for the Vikings. Their biggest need is obviously a franchise QB, and behind that offensive line help fucking anywhere, then safety or cornerback. In projecting a potential pick, I’m just being lazy and using Scout Inc.’s projected top 32 right now on ESPN, but as I see things playing out, I totally think one of the top tiered QBs could fall in our lap. Andrew Luck is going to Buffalo, and the only other team that would need a QB would be Arizona (Jake Locker?) which means the Vikings could nab Ryan Mallet or Cam “Laptop Thief” Newton. I would guess Childress would bristle at the idea of Cam Newton as a Viking, although I’m kind of on board with it right now, and don’t think Mallett is a great fit for our system. Instead, assuming that jackass Childress is still here, I can see us skipping on a QB and picking … Anthony Castonzo from Boston College to replace McKinnie, or Prince Amukamara to replace Winfield some day. That would be sexy. 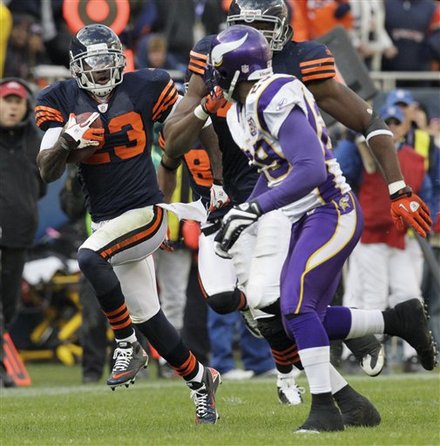 The Shit List: I am continuing a feature here in my quasi-revamped game review section called “The Shit List”. If you are familiar with such things as shit and lists, you know it’s usually a collection of bad things. In this case, every week I will offer you my collection of bad Vikings players that I hope become unemployed with a brain injury in the near future because they decided to play like a bag of assholes in the most recent game. I will also add a quick update as to why I hope they all get colon cancer. After Sunday’s game, this is who I have:

Phil Loadholt (I saw some play where he got absolutely blasted into the backfield. How does that happen when you weigh 1000 pounds?)

Lito Sheppard (Every catch made by a Bears player, I saw you about three yards behind, similar to where I’m at behind your girlfriend … wait … no, it’s because my penis is long?)

Bryant McKinnie (Peppers blew by you faster than you heading to Miami during a bye week. Get the fuck out of my state)

Brian Murphy (Chris Kluwe continues to save your ass by hanging his punts just enough to let your shitting coverage unit only allow 47 yards per return instead of 23.)

Brett Favre (Don’t worry, you didn’t throw those interceptions, the turf tripped up all your receivers. Totally on them, bro)

Madieu Williams (Have you ever had a tackle before?)

Greg Camarillo (Known for having great hands, I saw you drop at least two difficult but makeable catches Sunday. Quit football now, and go back to mowing my lawn)

Feel free to make your own suggestions in the comments, but we will continue to update this list as each game progresses. I am expecting it to get quite extensive as the losses pile up and will gladly take your suggestions into consideration. So get to hating.

– I need every retarded Minnesota fan to stop talking about Tony Dungy coming to Minnesota to coach anything. He’s done. And he hates homos. We can’t afford to lose Gay ’90s, OK? Or the Saloon!

– The wifey and I went to see Daniel Tosh Saturday night, and it was way more enjoyable than the Vikings game. He did say however he was kind kind of a Vikings fan, which struck me as odd, and that when he was in New Orleans for his tour recently the opening line he used was something like “Don’t expect me to feel all sympathetic for a town that the Earth gave a desperately needed bath to.” Truer words …

– I hope we’re wearing our throwback uniforms for the Packers game next week. If we’re going to look like a bunch of retards punching air, we may as well be dressed nicely.

– Zygi said after the game he won’t fire Childress, and I agree that he shouldn’t. What’s the point? The Vikings are out of contention now and Leslie sure isn’t going to fire them up. Also, Childress has Zygi cornered for a boat loads of money, and Zygi isn’t a Jew for nothing. He’ll know how to keep them dollars.

– I kind of wish Favre would jump ship at this point so we could see what TarVar looks like with extensive work now after these past two years behind Lord Favre. If anything, it will provide additional entertainment value.

– Favre has a shoulder injury now? Welp, anything to divert the attention away from you fucking sucking, I guess.

That’s it for now. The season may be over, but we’ll still be here to point fingers at millionaires and get pissed off for no good reason. As always, stick around this week, and keep the upset comments coming either on Twitter, Facebook, or e-mail us cool shit, and we’ll keep wishing for a swift death from Childress.