In somewhat of an unintentional series, the recent twitter bashing of Steve Mason (per usual) during his recent struggles in Edmonton and Calgary opened the door for me to reflect on not only the team, but key pieces of a franchise that will likely be a major part of the team for the foreseeable future.

In this installment, I would like to weigh in on some of the complaints (indirectly) and some of the goals scored on Steve Mason during his game against Calgary.  Based on some of the comments from a number of Columbus fans, again on twitter, as well as a sports writer or two, I think Mason deserves the air to be cleared on goals scored to really see where the fault lies.  It would seem at this juncture that most Columbus fans are extremely content with Mason when he is doing everything he can, saving nearly all the shots fired at him in a game, only to quickly turn on him when the team loses.  In fact, it makes me wonder what Vezina/All-star/Future HoF goaltender would be able to play in Columbus without the constant ire of a fanbase demanding something beyond perfection.

In any case, here is my take of the goals scored on Mason during the Calgary game:

Goal 1: Jokinen, from the slot, receives a pass from behind the net and beats Mason clean.  Here is an image I have put together to reference the goal; 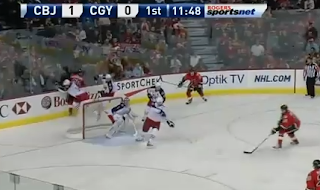 As you can see, Jokinen, a well known scorer in the NHL is given an excellent pass in the slot, otherwise known as a very high percentage scoring area, with absolutely zero obstruction from a Columbus forward or defender, and scores the goal on Mason, who is ready for the shot but is beaten.  Let’s take a second look at the Columbus players prior to the pass being made; 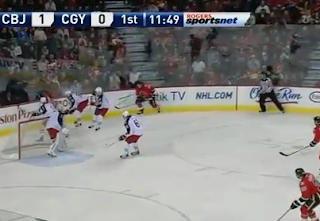 Notice anything interesting?  I count three players behind the net, with Nash in front not paying attention to who is in the slot.  I can understand blaming goalies for allowing weak goals, but this is an issue that has and was plaguing this team in mid December, something that no team should allow.

On to the second goal, scored by Jerome Iginla.  At quick glance, you see the puck hit Mason in the shoulder and jump high in the air, falling behind him with some luck and fluttering into the net.  But let’s take another look.  What isn’t directly noted, is the fact that Rivet lazily stuck his stick out to contest the shot, and the puck deflected off original course, causing it to deflect off Mason’s shoulder rather than somewhere in his mid-section.  Certainly a goal you hate to see scored, but can you really fault a goaltender for squaring up to the shooter and having the puck deflected off your own teammate?

Let’s move to the third goal.  The puck is played at the net by a Calgary player, which hits Mason in the left pad.  Unsure of where the puck went, he quickly looks the other way only to have a second Calgary player clean up the rebound for the goal.  No doubt something Mason could have avoided (I personally chalked that one up to a bit of shattered confidence considering the second goal) but let’s take a look and see where the rest of his team is; Notice the penalty kill they are on?  Notice no one taking the Calgary player completely alone in front of the net?  Seems a bit fishy to me.  In fact, I was blown away that the only comments being made at this time by the Blue Jackets twitter-verse were negative ones towards Mason.

The fourth goal was an excellent tip to the corner of the net, on a point shot labeled for Mason’s five hole.  He reacts by squeezing his pads together to make sure the puck does not go through, and unfortunately opens the corner for the deflection.  Methot was the defender who had been dealing with the player in front of the net, but had just taken a shot to the body and was in some distress from it.  I cannot honestly speak to whether Mason’s style caused that goal, but I can say those are the goals that good teams score.

Now, these goals are all fairly standard.  You have a scorer left alone in the slot, two deflections, and a rebound goal.  Certainly goals I would prefer to be saved, but at what level does the expectation for a save become too lofty for a goaltender?  Mason is not going to be in the Hall of Fame, as far as I am concerned.  I really do not think anyone in the Blue Jackets front office picked him in the third round of a draft thinking he was going to be the greatest goalie to ever play the game, and it really makes me wonder why the fan base sees him so differently.

It is time to get the expectations of Mason back to a reasonable standard.  He will make the saves that are there to be made, when his team stands tall in front of him.  Not unlike December, he showed a distinct inability to make the incredible saves when his confidence is shattered and his team fails to cover assignments, and that is simply something the team needs to get better with.  It is time to share the blame between goalie and coverage.  The Jokinen goal would not have happened if he was covered in the slot. The Iginla goal would not have happened if Rivet didn’t tip it.  It seems that a common trend comes to light here when we measure up what the fans deem to be solely the fault of a goaltender.  It is time to get just a little bit realistic.