“I thought it was down. Once it left my hand, I thought we were going to overtime.”

Darius Morris wasn’t the only one that thought his running floater — you know, the one that hung in the air for approximately 439284 seconds — was going in. As we all know, the ball pinged off of the back of the rim, I overreacted, then acceptance of what had happened finally set in. 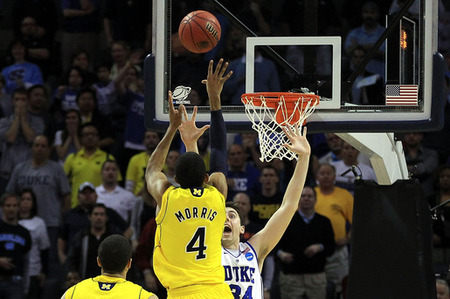 I’m not going to be the one to say that Michigan basketball is back. We’ve seen this same scenario before, and recently too: a Beilein-led team overachieved in 2009, leading people to claim that the Wolverines were back despite not going through the growing pains that most programs have somewhere in years 2-4 after a new coaching hire. Some coaches never get over those growing pains. Those coaches are called “unemployed.”

However, if there’s a time for Michigan to take the next step, it’s next year. No one graduates, no one is leaving early. The rest of the Big Ten will be decimated by graduating seniors and one-and-done superstars. Michigan will need to “engooden” themselves just to deal with the targets on their backs next season, especially that gigantic one aimed from East Lansing (pro tip: getting stronger might help).

Unfortunately, we need to wait 8+ months to see whether the Wolverines can take the step from shocking overachievers to legitimate contenders, and even then we have no idea how it will play out. The one thing we do know? It will be damn fun to watch.