Welcome back to tBBC’s weekly wrapup- random thoughts, snarky observations, random hyperlinks, and occasionally intelligent insight from the weekend in college football.  As always, we aspire to bring you the best soundtracks to help you enjoy the words and pictures… so here we go– thanks to Tony Gerdeman for this week’s musical number:

I’ll admit- I was more than ready for the college football season to begin… particularly after the off season that my favorite squadron had this year. So on Thursday, when my favorite sportscaster was in the booth and the “marquee” game was a matchup at a place that I’d visited before… you can say that I was a bit excited. 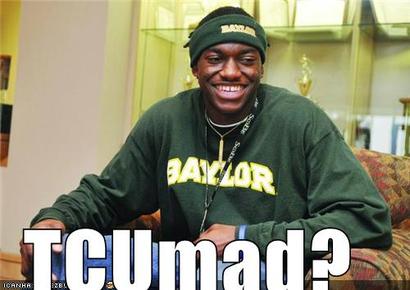 And it was totally worth it- the TCU/Baylor game exceeded my expectations as merely the appetizer for the weekend’s game, and launched officially the Robert Griffin Heisman campaign… man, the kid can play.  To be perfectly fair, if he and Luck and Jones and Moore have similar numbers, you’ve got to go with RG3 simply because his supporting cast is more ‘cast’ than ‘supporting’.

Remember when everyone was super excited about TCU and their unique defensive strategy? Yeah… about that. Like many have said, it certainly looked like they’d decided to play Big lEast caliber D in preparation for their new home.  That’s not to take anything away from the Bears, who absolutely did what they needed to do to set the college football season off on an amazing foot. ‘Sic ’em!

The theme of the week, though, had to be everyone’s awesome back to school clothes… who would be the fashionistas this year, and who would be stuck at the loser’s table? Let’s take a look, shall we?

Let’s start with the Fashion faux pas bowl between the Georgia Bulldogs and the Boise State Broncos. Allegedly a “neutral site” game, the Georgia dome hosted this “Pro Combat” showdown, which looked like either a USFL game or something from a 70’s movie about the future. The Dawgs looked terrible, both because of their inability to control Boise’s Kellen Moore and also because of their choice of attire.  You’ve got to wonder if they looked to Atlanta for their inspiration– if so, I also hope that they return to classic and never look back. What really worries me, though, is that Nike may take the same helmet pattern and use it as a bastardized “tribute” look for the Buckeyes later in the year.

Boise’s “White Out” look was a bit better, and it’s inspiration should have warned Georgia that they might be in for a long night. The only downside, though, to an acceptable look was the decision to have everyone dip their toes into a highlighter prior to leaving the locker room. Given that this is the only game of significance on the Bronco schedule, we concur with the thoughts of our friend Elika– now that they’ve beaten an over-ranked and traditionally underperforming SEC team, they’re a lock for the national championship game.

Speaking of highlighters, Phil Knight’s personal Malibu Stacey dolls were on display once again, as the Oregon Ducks traveled to Dallas to meet LSU’s Tigers.  The look that the Ducks went with could be easily described as “if a TIE-fighter pilot went out on a night time bike ride and wanted to be seen in traffic“… although, on first glance, it almost looked as if they’d found a new sponsor.

Oregon’s “High powered, high speed” offense was handled for the fourth time in three seasons, leading two two observations. 1) If you give a team enough time to prepare for the “Quack Attack”, they’ll be successful (Boise/LSU did their work as the first games of the season; Ohio State and Auburn did so in the bowl schedule); 2) The consistent variable for three of these teams- defensive line play. As Buckeye fans saw in the 06 and 07 NCG, having space filling defensive tackles who are quick and mobile is the best way to disrupt finesse gameplans in a hurry.  So, it might be another call to Will for some new “recruiting reports”, right? My personal theory for the Ducks faltering this week? “Jerryworld” is a field-turf facility, and everyone knows that the Ducks secondary is much more comfortable on grass.

For those of you playing the “How often will ESPN/ABC mention Oregon or LSU’s NCAA investigations or sanctions” drinking game… at least you still have enough beer to last you through the weekend, right?

Not to be undone by the beneficiary goodness of Oregon’s sugar daddy, you’ve got to know that T. Boone Pickens’ University would also look to keep pace in the “Uniform wars”, and they unleashed the gray jerseys this weekend. Did they need them to overcome Louisiana Monroe? Nope. Will the burn them and never use them again? Good to see that I’m not the only one who hopes so. 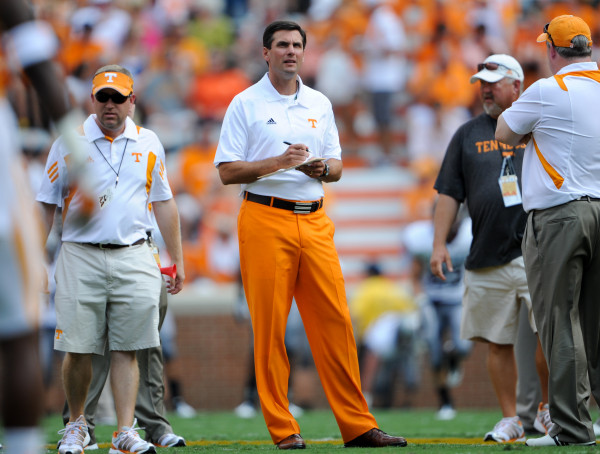 Hunting, trash pickup on the highway... these work

Let’s wrap up our journey down the runway by talking about pants.  Derek Dooley?  Don’t do this again.  E. Gordon Gee? I love you, but please… no.

Let’s stay in the SEC! SEC! SEC! for a minute, and point out that Kentucky has some folks who question their membership in the conference… which make sense, after WKU almost won the state championship from them. Although, the defending national champ$ found themselves in a similar situation, needing 14 points in the last 3+ minutes to keep from being upset by Utah State.  I guess you could say they had the crAppalachianState scared out of them. Well, you celebrate your accomplishments wherever you can find them, right?

Texas A&M may be headed looking for a new home, but the band at Rice nailed their next stop as well as well as the rationale during their game against the Longhorns. Don’t be surprised if there’s not significant action in the “expansion-palooza” over the next few weeks, with rumors that Oklahoma and TBPU are looking to join the Pac 12+2/4, which was almost a done deal last summer. This would also let Texas and (presumably) Texas Tech join the fun as well- making the first 16 team conference with a Western (old PAC-8) and Eastern (SWC + Utah/Arizonas/Colorado) divisions. Would certainly be a great time to be Larry Scott’s accountant.

And what a great conference to join- Colorado gets clown stomped by Hawai’i, Oregon State falls to Sacramento State, the University of Washington needed a late defensive play to hold off Eastern Washington, and  Cal almost fell to our friends at Fresno State. Oh, and the “flagship” Trojans of Southern Cal were led by Lane Kiffin’s inability to use the “When do you go for two?” chart in their game against Jerry Kill’s Minnesota Gophers… another late defensive play to save the game. To be fair, though, UCLA gave us the “catch of the week not by a Buckeye freshman“-

Well, here we are in the B1G, where Indiana continues to be Indiana and Nebraska still knows how to play defense. Wow. But the big story in the Midwest was the storm that ripped through northern Indiana and Michigan… meaning that Michigan won a game without finishing a game. For only the second time in Big House history, today’s matchup against Western Michigan was stopped after the third quarter and second lightning related evacuation of the facility. As a vestige of the Rodriguez administration, though, the lightning continually missed the completely open receivers.  Michigan’s defense was the story of the day, with an interception and a fumble recovery for a touchdown. Lost in that, though is the reality that WMU only had ten less total yards than the Wolverines, including the fact that Michigan gave up more yards in the first quarter than Ohio State did in their entire game against Akron.

But it’s not just Michigan football that God hates- ‘Cause Notre Dame is back, baby!!!! And their fans are soooo excited! Showing their displeasure for The Almighty’s team means that there will be a response- horrible winds and storm result in stadium evacuation. And sure, the Fading Irish lost, dropping yet another game to a Big lEast team that they should share a conference with, but hey… at least they learned their lesson about weather safety!

Oh, and by the way… if you don’t have Ohio Dominican Panther Fever– it’s not too late to catch it!

And the best thing about this weekend is it’s not over yet… Monday is the Maryland Ronald McDonalds squaring off with what’s eligible or left of the Miami Hurricanes.  Great game? Probably not… but it’s another excuse to plop your tush on the couch and fire up the old 50 inch plasma.  And that’s the whole reason that Labor Day exists- why else would we strive for a paycheck.

Next week, we’ll come back at you with our take on TBPU and Arizona, Mississippi State and Auburn, ‘Bama and Penn State, our favorite Pat Hills traveling to Lincoln, and the annual “Asteroid Strike” game between Notre Ame and Michigan.  And guess what… they’ve got fancy uniforms. Wheee.

In the meantime, celebrate Labor Day by being grateful you don’t work here: