The Sabres’ current run of games – in which they play 12 of 15 at home – has not been too kind to them. Saturday’s victory in Nashville was just their second in their last five games. 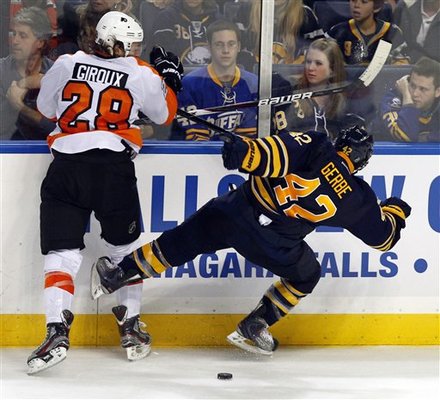 Buffalo closes this stretch with a five-game homestand, it will be crucial for the Sabres to finish this run with a high points percentage. They certainly won’t get many breaks, beginning tonight. The Flyers are in town for their second, and final, visit to the First Niagara Center just over a month removed from when they came and exerted their will on the Sabres early in November.

All accounts say James vanRiemsdyk will be back in the lineup for Philly. However, they will be missing their captain as Chris Pronger sits with a bum knee. No matter, on paper the Flyers have the make up of a team that can push the Sabres around. If Buffalo is to start slow again, it will be a very long night. If they expect to get by on less than 20 shots on goal, they have another thing coming.

This very well may serve as a statement game for the Sabres. If they can give the same effort they did against Boston in the “atonement game” – well at least their first period effort – they will skate right with the Flyers. If they come out flat, like they have so many times this season, they will get booed out of the building.

The Sabres youth vs. the Flyers youth. Both teams have an abundance of young talent. JVR and Matt Read are talented and Claude Giroux is scary good. The Sabres youth, unfortunately is of a different brand. The rash of injuries to this lineup have forced numerous call ups and there is a serious lack of experience throughout the Buffalo line up. The Sabres will need their rookies to play above themselves in order to stay competitive tonight.