It’s the time of year where fans of teams that didn’t make playoffs turn their attention to the draft and look to the future. Unfortunately, Raiders fans are apart of that collective. I will be giving you a look at the top prospects (senior and juniors that have declared to date, only) at every position as we head towards the 2013 NFL draft. We will post refreshed rankings after the combine, pro days, etc.

Today's focus is on wide receivers.  While the Raiders are very unlikely to take a wide receiver in the first round and lack a second round pick. However, receiver is an area of weakness with them and they may look for at a pass-catcher if one they like falls into the 3rd round.

1. Keenan Allen 6’3 210 lbs California
Allen is a natural hands receiver who has the ability to catch the ball away from his body.  Although he suffers from the occasional concentration drop he more than makes up for it with his ability to make some stunning catches too. He uses his body well to shield defenders from an approaching ball so he can get a reception even when covered.

Allen doesn’t have elite speed but he has the ability to create separation and is deceptively fast for his size. He can use his size and athletic ability well and will help out his quarterback by allowing them to throw the ball up for grabs where he’ll climb the ladder to bring it down.

Allen is coming off an injury so the medical testing and skill tests at the combine/pro day will be big for him but if he tests well in those areas he should get drafted high.
Pro Comparison: Dez Bryant

2. Quinton Patton 6’2 200 lbs Louisiana Tech
Patton would be a good fit for a West Coast offense or other variations that value short and intermediate routes, allowing teams to continually move the chains.  More of a possession receiver, he can go over the middle of a defense and make the catch in traffic.

Shows reliable hands and catches naturally away from his body. A polished route-runner and he has improved dramatically in this area over the lasy year. Patton doesn’t possess great speed but he has enough for the position even in the NFL, reportedly running a 4.56 in the 40. He projects as a good but not great yard-after-catch (YAC) receiver who has enough of a physical presence to make guys miss.

It seems likely he’ll be rated lower than he should because he went up against weaker competition in WAC. However, CB Johnthan Banks of Mississippi State, who is one of the top prospects in the 2013 draft and a likely first round pick, said Patton is most complete receiver he’s come up against.
Pro Comparison: Michael Crabtree

3. Tavon Austin 5’9 175 lbs West Virginia
The term “Home run threat “is made for players like Tavon Austin, a speedy, undersized receiver that can take it to the house any time he has the ball.

He’s undersized for the NFL and will make his mark better in positions where he isn’t jammed off the line (slot and flanker role on the outside).  He can struggle to make catches in traffic and is much better when he can be isolated in space.

While his size may harm his draft stock, his playmaking ability and versatility (he lined up all over field, even in the backfield at RB at WVU) could even have a team that is looking for a spark on offense select him in the 1st rd.
Pro Comparison: Randall Cobb

4. Justin Hunter 6’4 190 lbs Tennessee
Before an ACL injury in 2011, Hunter was looking like a top prospect in the Draft. However, after returning in 2012, Hunter seemed to lose a lot of his explosiveness and speed off of the line of scrimmage.

This leaves me (and NFL scouts, too) to wonder if lack of explosion is simply that he hasn’t had the time for his body to come back 100% from the injury or if the injury has permanently affected his speed.  Teams will come to different conclusions on that but that question is the biggest key to Hunter’s draft position.

Injury aside, Hunter shows great hands and jumping ability to go get the football. Long framed, Hunter has long strides building up his speed to go over the top of Deep zones.  However, he isn’t a “strider” at the position (a strider is a term for receivers who have long strides which can get them down the field quickly but are less effective when needing to make abrupt route shifts) as he is able to shorten his strides as needed in his routes.

Runs slick routes with good acceleration in and out of his breaks. Not a big YAC receiver but decent enough.
Pro Comparison: Sidney Rice 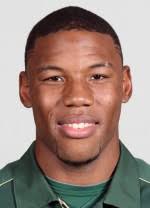 5. Terrance Williams 6’2 205 lbs Baylor
Williams is not a natural receiver and catches too many balls by cradling the ball into his body – that technique will frustrate his QB and coaches because it results in incompletions (drops and, even worse, deflections that can be intercepted) in the NFL.  He struggles to catch the ball away from his body and he also exhibits inconsistent hands.

Williams has the vertical speed to take top of a defense with both acceleration and agility to get separation. He excelled this year even with the loss of Robert Griffin III. Baylor has had some recent success with their players transitioning well to the NFL (Kendall Wright and Josh Gordon) and look to be adding another good young WR in Williams.
Pro Comparison: Mike Williams (Tampa)