Despite dominating the league for much of the season, DeMarcus Cousins fails to make the 2014 NBA All-Star team.

In case you missed the news on Friday, DeMarcus Cousins was once again passed over for the 2014 NBA All-Star game.  This time it was as an injury replacement for Los Angeles Lakers star Kobe Bryant, who has played just six games this season due to multiple leg injuries.

The spot went to New Orleans Pelicans big man Anthony Davis, which makes perfect sense.  In his second season in the league, Davis is having a tremendous season, posting 20.5 points, 10.5 rebounds and a league-leading 3.3 blocks per game.  He also plays for the host city and enjoys a sparkling reputation in his first season and a half in the league.

Cousins isn’t happy with the decision.  He believed he had done enough to warrant the call and turned to Twitter to voice his displeasure with the situation.

Sacramento’s 23-year-old big man is right.  Politics played a role in every decision made regarding the All-Star game.  Unfortunately for Cousins, he doesn’t play the political game.

In fairness, he probably wouldn’t be great at playing politics anyway.  He has a surly side, and he is also honest to a fault at times.  And then there are the other issues.  Cousins is once again at the top of the league in technical fouls, and there are plenty of stories that we could rehash regarding “incidents” in which he has been involved.

He isn’t perfect as a player or a person, but his growth, both professionally and personally, is profound. Just not profound enough.

“It is disappointing,” Cousins told reporters on Monday evening.  “I don’t really think it’s fair, but it’s not my decision.  I did what I could control and that’s all I can do.”

On the basic statistical level, Cousins is right.  He did everything thing that he could do to put up All-Star numbers.

And I agree that the All-Star game should be reserved for the best NBA talent.  And Cousins is one of the best players in the NBA without question.

On the season, he has averages of 22.9 points, 11.7 rebounds, 3.0 assists, 1.7 steals and 1.2 blocks per game.  His 15 game double-double streak from earlier this season is still tops in the league, and his 31 total double-doubles are good enough for fifth in the league.

He isn’t a defensive stalwart, but there are plenty of All-Stars who aren’t known for their defensive prowess.  He is the best offensive center in the game and yet, he isn’t one of the 24 players representing the best of what the league has to offer.

The pundits will point to the Kings’ 17-33 record as the primary reason for the snub, but letting in Davis whose team holds a 22-27 record dispels that notion.  In fact, seven players on sub-.500 teams are All-Stars this season.

“In the past, there have been guys that didn’t get voted in, that were picked by coach, on losing teams,” Cousins said.  “So I don’t really want to hear the excuse.”

If you look deeper, there are reasons, not excuses for Sacramento’s subpar record.  New owners, coaches and management were all brought in late in the offseason.  General manager Pete D’Allessandro has also pulled off two substantial in-season trades that have reshaped the Kings’ roster on the fly.

It should also be noted that Cousins has missed seven games this season due to injury and that the Kings are 0-7 in those contests.

For a man who plays a game for a profession, he doesn’t understand that being a professional basketball player is so much more than scoring, rebounding or making a pass.

Cousins had an opportunity on Wednesday to plead his case to new NBA commissioner Adam Silver, who watched the Kings center drop 25 points and 10 rebounds in the Kings’ 109-101 win over the Raptors.  But when asked if he would lobby the new commissioner for his vote, the answer was a flat-out “no.”

The uber-talented cornerstone to the Kings franchise almost seemed perplexed by the question.

This is the mindset of a 23-year-old man. It is the mindset that the good folks in the Kings’ front office, at the league office and at Team USA are praying they can change.

Sacramento has gambled that Cousins will turn the corner.  Even Team USA is willing to look to the future with him, but they have plenty of time to see growth before they put him in a uniform and have him represent the country.

The league isn’t looking for cookie cutter robots.  They embrace the vibrant and colorful personalities of Charles Barkley, Chris Webber and Shaquille O’Neal long after they retired from the game.

More than any other league, the NBA is about the individual.  It is a stars’ league and Cousins is so close to that stature.  So close.

Cousins’ passion for the game is undeniable.  His want to win is as great as the league’s best players.  But that is not enough.  Cousins has to remember that he is playing a game.

“Politics …ha!” is why Cousins isn’t wearing a Western Conference jersey next week.  Not the actual words, but the fact that he would turn to Twitter and put those words out there.  The fact that those words are written across his forehead every time he walks on the floor or speaks to the media.

He is negativity personified.  There is no joy.  And that is not what the Kings or the NBA or Team USA want to showcase.

That is not the only side of Cousins.  I have seen him interact with children and he is masterful.  They are drawn to him, not because he is a giant, but because he shows them a side that he refuses to show on the court.

It is time for Cousins to re-examine his approach to being an NBA player.  His game has grown by leaps and bounds, but now it is time for him to take the next step and drop the guard that has made him incredibly polarizing.

No one is asking for him to transform into a rah-rah cheerleader.  There is an authenticity to Cousins that is refreshing and one that will hopefully never go away.  But the NBA is a business and every person watching is a customer.  He is being paid millions of dollars to play a game for thousands of people who want nothing more than to be entertained.

The fans didn’t vote him to the All-Star team.  The coaches passed as well and when the league had an opportunity to override these decisions, they passed.  If Cousins still thinks that it’s not him, then he’s wrong and that is really unfortunate. 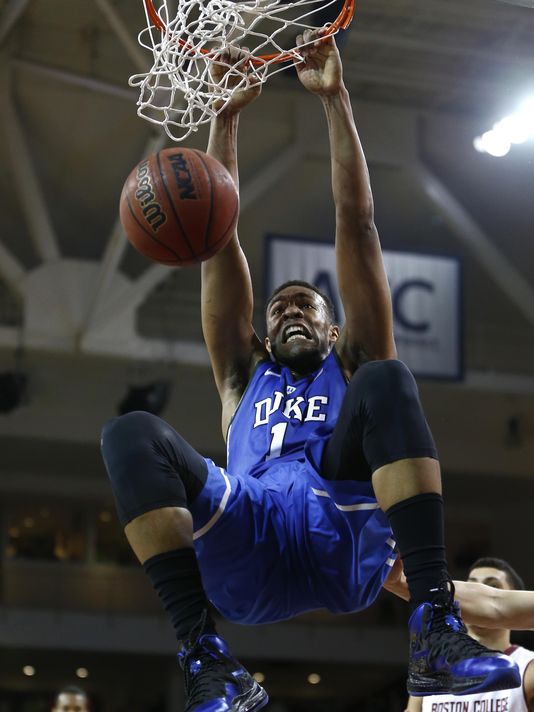 Your Morning Dump... Where Jabari Parker submits a career best performance for Ainge and C's brass