As for me, well, I couldn’t be more excited about our 23rd ranked Washington State Cougars.  Unfortunately, I also couldn’t be more busy this week, so let’s get straight to this week’s “Monday Notes” post, provided to you again in “bullet” form….

Things that I am the Most Excited About:

This Team!  For most of this year, I have been gripping every time that I have watched this team play on  Saturdays. And while I did a much better job “enjoying” Saturday night’s game, I also spent the better part of the fourth quarter so nervous and nauseous that I could barely talk.  Well, NO MORE!   By the time I went to bed, I realized that we only have three more chances to watch this group play together.  This is such a special, special group–one that is having an historic run!  So, it’s high time to actually enjoy these games!  And it should be easy because what’s not to love about this team????? 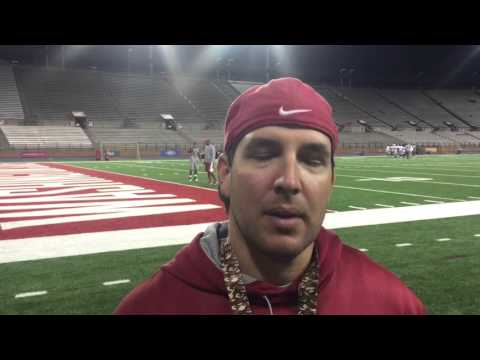 You can open your eyes now, Eric, your group played good!

#SpecialForces.  For most of the year, our Special Teams have been more than just a liability—they’ve been a total joke.  Well, on Saturday, Mele’s group played out of their minds.  One blocked punt, two punts that were placed inside the ten yard line, fantastic coverage on kickoffs—including a strip and recovery that kept us in the game—as well as flawless play by Powell.   Simply put, if this group plays the rest of the way like it did Saturday night, this team has a very good shot at 10 wins.  Moreover, if it plays this way next year, our Cougies can and should contend for the Top 10.

(As a related aside: The ONLY bad call IMO occurred on that UCLA fumble at the end of the first half. By rule, it sure seems like that said play should not have been overturned because the official called the play dead–even though it was a fumble. You can hear the whistles loud as day to on the replay–not sure what the heck happened there!).

The Offensive Line.  In the first half, UCLA looked scary, scary good across the board (they looked awfully good all night to be honest). But I was particularly impressed with the play of their defensive line: They were so strong up the middle and really fast on the outside.  But in the second half, we brought in Freshman Andre Dillard to play left tackle.  And when we did that, Ecklund slid back over to left guard—which allowed Eduardo Middleton to return to his natural position at right guard.

Well, from that point forward, the offensive line performed admirably.  Moreover, with Dillard at Left Tackle, 4/5 of the Offensive line we saw in the second half last night will return next season.   How freaking awesome is that?!

Pump up The Jam.  One of the more surprising developments of Saturday’s game was the uber-press coverage which UCLA showed on our game winning drive.  And while I had complete faith in our players, it was really great to see both Dom and Gabe Marks eat up those physical double teams to get open when it mattered the most.  Simply put, nobody  will be able to throw more at us than what we’ve seen the last two weeks.  So, even though I think the Huskies match up very well with us, we also know that, at this point, we’ve pretty much seen it all.

Got a belt in preseason and a champhionship stache at UCLA

Bender But Don’t Break.  One of most important plays on Saturday night was Peyton Bender’s touchdown pass to Dom Williams late in the first half.  The throw was absolutely beautiful and followed three rather abysmal looking incompletions.  It was a huge gut-check moment for Pender and he came through like a champ.  Honestly, if I was Leach, I would have given him a game ball.

Most of the ESPN-type bowl projections have WSU slotted in the Sun Bowl.  And while I happen to think that El Paso is great, there is NO WAY that WSU is going anywhere besides the Alamo Bowl or the Holiday Bowl if we win out.  My rationale is as follows:

First, if WSU can win its final two games, it will finish with an incredible 7-2 record in conference.  And while I think that Oregon is likely to match that, I find it highly unlikely that others would.  For instance, if Oregon beats USC this weekend in Eugene and UCLA beats Utah, then the South leaders would all have three conference losses at weekend’s end—which would put each of them one game behind WSU and Oregon going into the Apple Cup.  Then, if we fast forward a bit and assume that the South winner will lose to Stanford in the Pac-12 title game (I’ll take UCLA as the best candidate to do that), we get the following conference picture:

Of course, the above scenario gets complicated if Stanford were to lose two out of their next three games or if Utah were to win out—including the Pac-12 title game—but you can see from the above scenario how a 7-2 Cougar team would have, at minimum, the second best W-L record in the conference in conference games and only Utah in the above scenario would be within one game of the Cougs (which would be required to choose a team below us)..

So, win out and it sure seems like it will be “San City.”  Personally, I am hoping for a Baylor-WSU Alamo Bowl in San Antonio on January 2nd, but the Holiday Bowl in San Diego would work if they prefer the Ducks over the Cougs…

What Has Me Concerned:

Trap Game!  This group has been awfully even-keeled and focused, so part of me doesn’t think that this team will overlook what is a VERY IMPROVED Colorado team.  Having watched the Buffs on Friday night, I can say without hesitation that Colorado is the type of team that we wished we would have had  during the Paul Wulff era.  In short, this is a team that can and will beat us if we don’t come to play on Saturday night. Thankfully, USC’s success in establishing those mid-range slant patterns indicates that Dom and Marks can and should have a field day on their defense—provided that Dom is healthy!  That said, those corners of there are pretty good–so don’t sleep on the Buffs (and man, that line is so darn high!!!) Weather!  So far, Luke Falk and WSU have shown that they can weather the elements. But its going to be cold on Saturday and who knows what Husky Stadium will be like the last weekend in November.  And with the cold sometimes comes injuries and muscle pulls—something we can ill afford if we’re going to win out.  So, as time allows, please do Cougar Nation a favor and say a few prayers to the Football gods.  Can we keep the rain, snow, or wind down to a minimum, because our football team is pretty darn good!

That’s all the time I have for today. I’ll be back on Thursday to offer another sterling set of bad predictions.