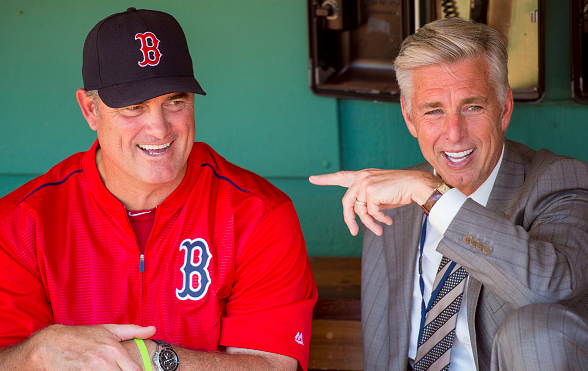 On the heels of finishing in the American League East basement three times in four years, the Boston Red Sox made a big change last summer by hiring Dave Dombrowski. He arrived with a certain reputation and has lived up to it thus far.

The biggest thing on his 2016 to-do list was getting the Red Sox back into the postseason before designated hitter David Ortiz rode off into the sunset. He officially crossed that off his list about a week ago, but it’s really just the beginning.

In October once again – and mostly with players from the last front office regime – two of Dombrowski’s biggest offseason moves from last winter will be crucial pieces to the team’s success or demise.

Boston’s greatest need following a disappointing 2015 was obvious: pitching. They needed an ace at the front of the rotation and shutdown relievers at the back of the bullpen. In typical Dombrowski fashion, he made big splashes to fill those needs by trading four prospects for Craig Kimbrel and throwing a bunch of money at David Price.

Risky moves? Yes. Moves the Red Sox hadn’t made in recent years? Yes. But with a win-now mentality, they had to be made. Every acquisition comes with risk, but Kimbrel and Price were as close to slam-dunks as it could possibly be with regard to production.

Throughout their respective careers, each hurler has been a consistent force when toeing the rubber. That’s why 2016 has been frustrating for fans.

If trading four prospects for a relief pitcher seems like a lot, that’s because it is. Kimbrel did justify it by racking up 225 saves to go with a microscopic 1.63 ERA and 0.93 WHIP in six years prior to this transaction. That was the kind of shutdown reliever Dombrowski wanted for his bullpen.

Kimbrel’s 3.40 ERA and 1.09 WHIP in 2016 are both career highs, but they don’t look outrageous. He did only blow two of his 33 save opportunities while adjusting to the American League, but that’s not even close to telling the full story.

The right-hander’s monthly progression has taken the Fenway Faithful on a not-so-fun ride, with a low point coming at the worst time:

Boston’s bullpen finished the regular season with a flourish, ranking second in baseball with a 1.81 ERA through September and October. Kimbrel was part of that, but the four earned runs and three walks he allowed without recording an out against the New York Yankees last week left a sour taste in everyone’s mouth.

Getting off to a slow start in April isn’t out of character. Posting a career-high BB/9 rate of 5.09 certainly is, especially since his 68.2 percent first-strike rate is the highest it’s been since 2012. To make matters worse, he’s also had difficulty closing out innings (.757 OPS with two outs in ’16) and stranding runners in scoring position (.920 OPS in ’16).

We all know every move in October is monumental and managers obviously call on their closers in tough spots late in games. John Farrell has options, but he’ll be calling Kimbrel when it matters most. This is why they traded for him.

Instead of feeling confident, fans will probably be in a glass case of emotion with each pitch thrown.

Price finished the regular season with a 17-9 record, 3.99 ERA, 1.20 WHIP and 228 strikeouts in a league leading 230 innings pitched. Seems solid, right? It is, but check out the journey he went on before settling into those numbers:

Even the best pitchers go through peaks and valleys during a season (or seasons, just ask Justin Verlander). It’s just that the valleys seem to be happening more often than normal. Price also didn’t instill a lot of confidence over his final four regular-season starts (5.55 ERA in 24.1 innings pitched).

These struggles only magnify Price’s postseason resume – he’s 2-7 with a 5.12 ERA and 1.17 WHIP in 63.1 innings pitched. Not only will he be dealing with the “You have to produce in the playoffs” pressure, he’s still dealing with the “You’re supposed to be our $217-million ace, now act like it” pressure.

In his first winter at the helm, Dombrowski took the wheel to make these two big splashes for a reason. If the Red Sox wanted to contend for a World Series in 2016, he felt these moves were necessary.

He’s not wrong. Brian MacPherson of the Providence Journal recently pointed out that Boston has achieved World Series glory three times this century with solid pitching as the foundation:

The Red Sox surely signed Price with this thought in mind, but it remains to be seen if he can add his name to the above list.

Prior to this season, I mentioned that players Dombrowski probably wanted nothing to do with — like Pablo Sandoval and Hanley Ramirez — could make or break this season. With October upon us, those two slam-dunk moves from last winter are the ones now under the microscope.

Talk about irony – baseball is a funny game, isn’t it?

Expanding MLB with an All-Rookie Team