Mark Helfrich faces the music, and hopes the band doesn't break out into taps 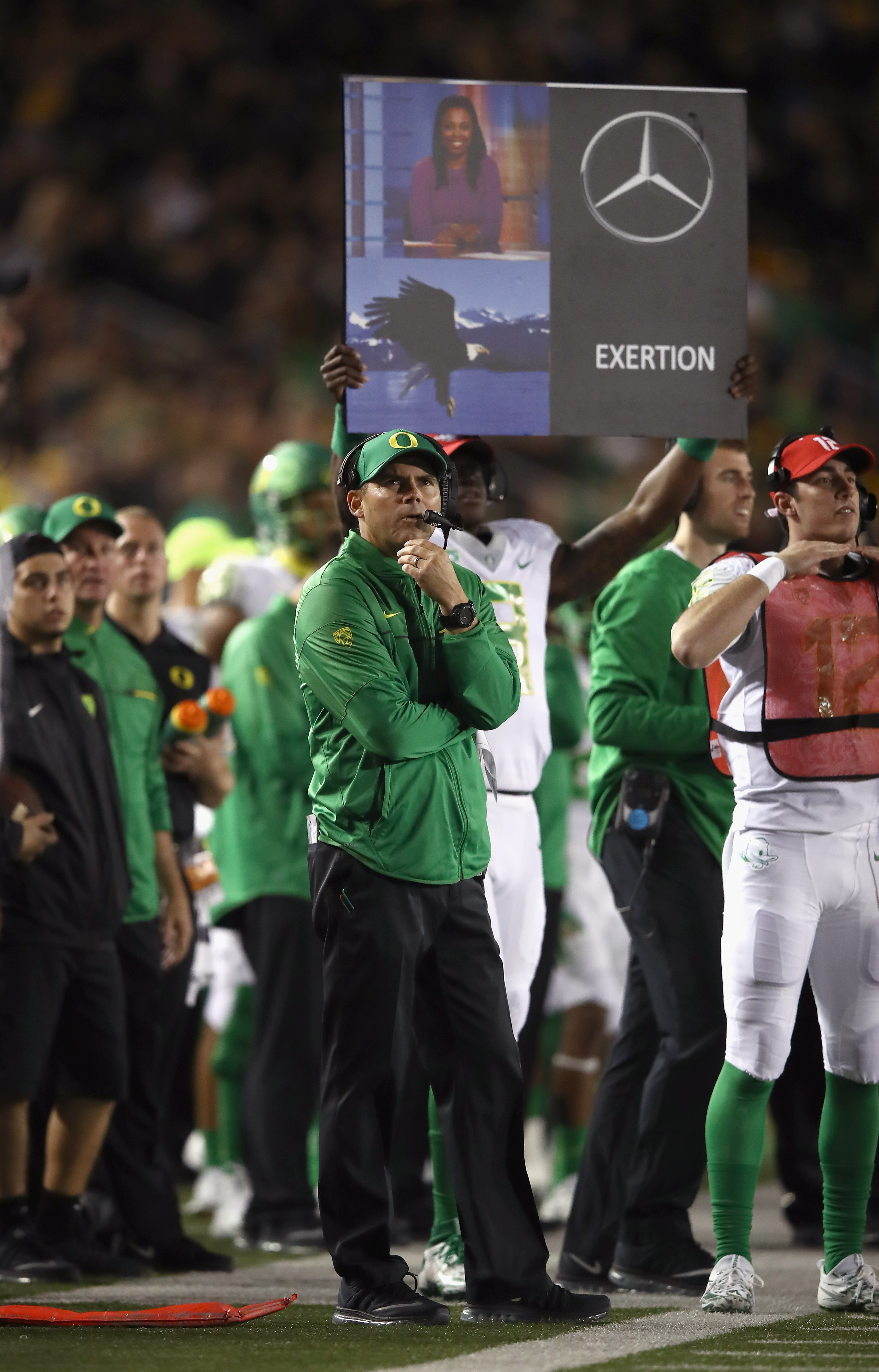 Mark Helfrich faces the music, and hopes the band doesn't break out into taps

Sign, sign, everywhere a sign: Mark Helfrich looks for answers during Oregon’s 52-49 loss to Cal on Friday night. Mired in a 5-game losing streak, he hasn’t looked like the Mercedes Benz of coaches. (Photo by Ezra Shaw/Getty Images)

As bad as this season has been, it’s important to remember Oregon has lost three games by a field goal each. Better coaching, more discipline, and they could be a very healthy and respectable 5-2.

Here’s a potential bombshell: Phil Knight was in the visiting coaches’ suite for the Cal game. The Oregonian’s John Canzano reported he was on the sidelines when Herbert hit Charles Nelson on a scintillating 42-yard catch-and-run to pull within 42-41 with 3:15 to go in the fourth quarter, and he shouted out that the Ducks should not go for two.

Knight just contributed 500 million dollars to build a new science campus at Oregon, a clear sign he’s committed as ever to his alma mater. On Sunday he was Chip Kelly’s guest on the sideline during the 49ers 34-17 loss to Jameis Winston and Tampa Bay, a loss that dropped the former wizard of the Quack Attack to 1-6 in his second stop in the No-Fun League.

Whispers are that the old shoe dog and Nike billionaire is working the phones and exploring his contacts, quietly and behind the scenes, which is his way. He wants a coach who will restore the swagger and excitement in Oregon football, and he wants to land a whale to do it.

In the words of the immortal king of the blues, nobody loves Mark Helfrich but his mother, and she might be jivin’ too. He’s stuttered and mumbled to a 2-5 record. His team lacks discipline and makes an admitted 31 mental errors a game. Seven games into the season, they still have a million things to clean up, the same litany of excuses and milquetoast resolutions after each one of the losses.

It’s true that the cycles of college football are more rapid than ever in 2016. Look around the PAC-12 now, and former also-rans Washington, Washington State, Colorado and Utah are on top. UCLA is in ruins. USC is two losses from another tarmac firing. Stanford just lost to Colorado 10-5, managing just one meager field goal on offense with former Heisman front runner Christian McCaffrey held to 92 yards. They’re 4-3, punchless, no longer intimidating.

Across the country, Michigan State, Notre Dame and Texas are suffering through miserable seasons. Arkansas and Ole Miss are in the SEC West basement.

It’s clear anyone can have a down year, but what’s happened at Oregon looks like more than a down year. It’s the collapse of a culture. It’s a team that no longer knows how to win or keep from shooting itself in the foot. Veteran leadership is absent. This team doesn’t look prepared. They are simply awful at the start of games, stumbling in first possessions, then allowing scores just before the half and out of the break.

These Ducks are slow to make adjustments. Cal kept pooch-kicking to an up man on the Oregon kick return team, and it took until the fourth quarter for the UO coaches to insert a return man in that position and take advantage of the easy yards. The defense kept putting five in the box while Tre Watson and Khalfani Muhammad ran like the second coming of Jim Brown.

It was clear Freeman wasn’t himself after two carries against the Bears; he got the ball 15 times for a paltry ten yards. He had no acceleration and looked obviously uncomfortable (Canzano forwarded that the junior running back was playing with a bruised sternum).

Team leaders like Tyrell Crosby, Devon Allen and Johnny Ragin III are injured and out for the year. In their absence, Freeman, Darren Carrington and Pharoah Brown all look more ready to start training for the NFL combine. They’re detached and appear indifferent. Asked about Helfrich, Brown calls it “a business relationship.” That’s not a ringing endorsement.

Losing breeds dissension and discontent. The current staff has identified their quarterback, and that’s good, but the one endorsement Helfrich has to secure is Knight’s.

Without it, he’s a dead Duck.