Chris Drake joins us today for a fan post. He wants those fans of other teams who are excited for the Buckeye loss to know that it in no way means they will play the same way against them. Please give Chris a follow on his twitter thing and comment on the article!

Sometimes I'm jealous of fans of mediocre college football teams. As an Ohio State fan, I rarely get to feel about a win the way they do.

Being a fan of a perennial college football power is great and horrible at the same time. It’s great when your team is rolling over teams but it’s horrible when you lose to an unranked team with a mediocre head coach. The latter was the case this past Saturday night.

One thing that always follows a loss like this is college football fans proclaiming that Ohio State was overrated, is actually awful, and will probably lose the rest of their games. Okay, the last two may be just what the ‘loss handling’ part of my brain was saying. That’s a real brain section, it’s near the Parietal Lobe, please Google it!

I am not #Blessed like most of you, I don’t live in The Great State of Ohio. I live in The Ehhhhhhhh State of Nebraska (pretty sure that phrase is on the state seal). I could write an entire series about living among the self-proclaimed “Greatest Fans in College Football” but I digress. Living someplace where every other team in the Top 10 is watched as closely as the only team in the state can be absolutely exhausting. Especially when that team has not even been close to relevant in the last 15 years.

Most of my casual wardrobe consists of Ohio State branded clothing… and cargo shorts… feel free to blast me. Everyone that knows me, even casually, knows that I am an Ohio State fan. Leaving the house after a Buckeyes’ loss can be a tiring experience. This Sunday was no different but since my son had three basketball games, all I talked about the entire day was Ohio State losing.

Attention fans of Ohio State future opponents: your team didn't beat Ohio State. This loss has no bearing on how they will play your team.

One thing that was brought up by nearly all my Nebraska-fan acquaintances (not friends, I’m generally not friends with morons) was how they felt that they had a chance to beat Ohio State now. It echoed the same thing that fans of different teams that I read on Twitter and in messages sent to me Saturday night. I sent out the above Tweet after they came across my feed and my inbox. It just reinforced my theory that college football fans don’t really understand the game.

I’ve been guilty of it in the past myself. I see one small sample of a team and I immediately think that they are either garbage or one of the top three teams of all time. We’ve gotten ourselves into a habit of making everything either the greatest or worst. I’m not going to sit here and analyze all the reasons for that because I’m probably the worst cultural analyst EVER.

My point in all this rambling is that Penn State beat Ohio State in a very weird game Saturday night. If you looked at just the yardage stats from the game, you would probably guess that Ohio State won a 38-17 type game. It never felt like Penn State had a chance. They won on heart and mistakes by Ohio State.

If fans of Northwestern, Nebraska, and Michigan think that Penn State gave their coaching staffs a blueprint of how to beat Ohio State, they are sadly mistaken. There is no game-plan that can account for the way that Penn State won. Sure, they had decent 2nd half defensively but they also had a number of plays offensively that won’t happen on a consistent basis. The QB scrambling and heaving the ball down field to WRs that went into playground mode are not things that you can successfully write into a game script.

You also can’t count out bad officiating by B1G refs… Wait… Yes, you can but you won’t know which way those calls go. You can’t count on swirling winds and rain. You can’t count on Urban rushing out a field goal unit with 15 seconds on the play clock (Right, Urban? RIGHT?). College football is a crazy game like that. That’s why it’s the greatest and worst game EVER.

I did have a few rational minded friends that told me that they were worried more about Ohio State now than they were before. They saw what Ohio State did after that Michigan State loss last year. In the interest of not being a moron myself, I pointed out that this is a vastly different team than last year.

It is possible that the guys are just too young to bounce back mentally but it is also possible that the coaching staff will whip them into such a frenzy that Northwestern may just be a purple blot by the 4th quarter on Saturday. Honestly, I don’t know what to expect this weekend… Except for one thing, I expect there will be rampant overreaction by everyone. 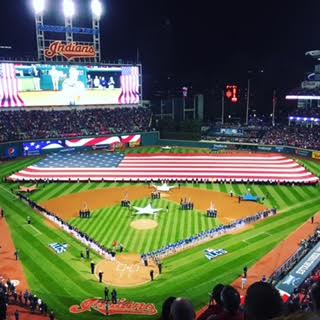 The 112th World Series overflows with story lines: The Cubs have not won a championship since 1908; Cleveland has gone without since 1948. Indians Manager...