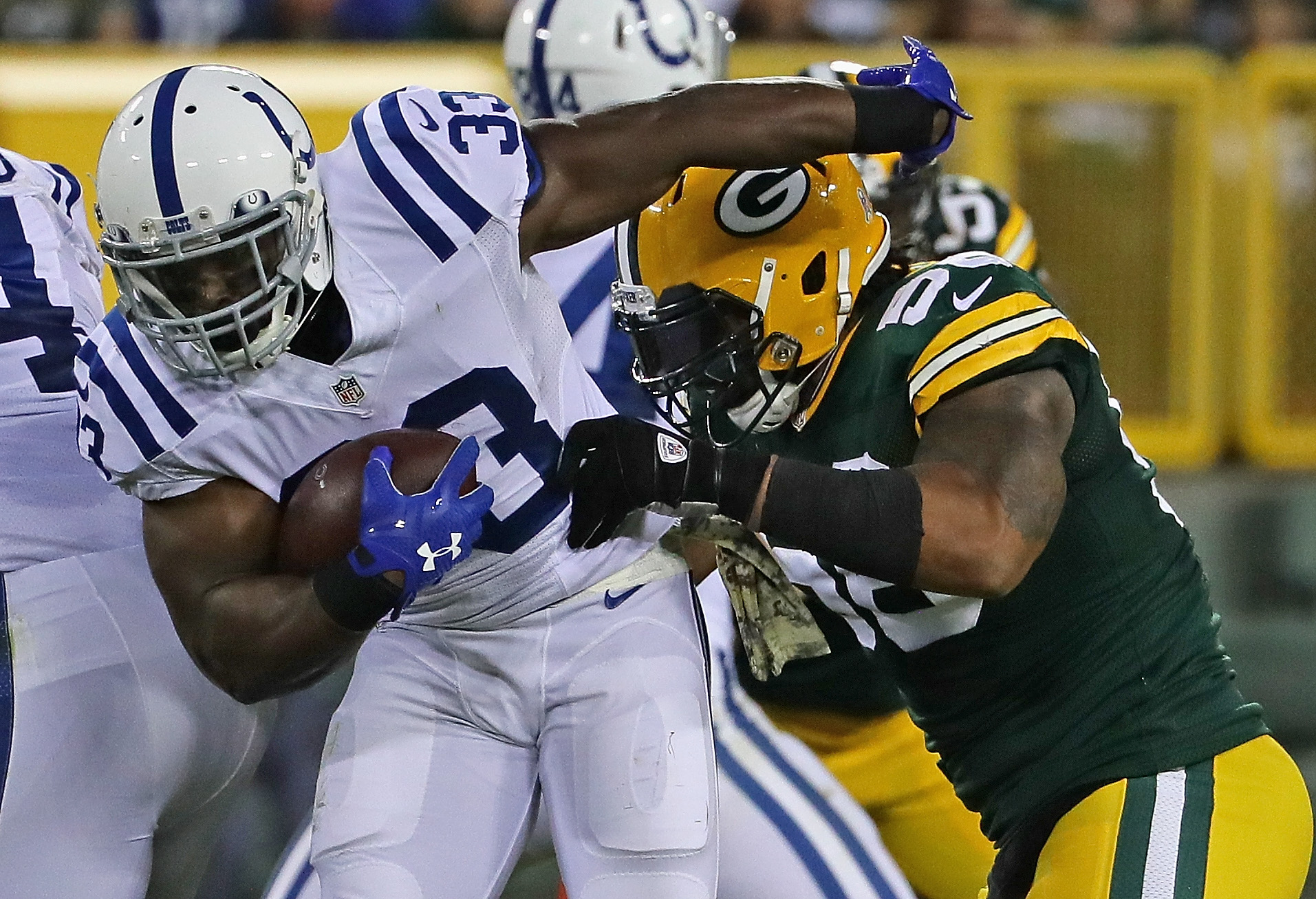 The Indianapolis Colts took an 18-point lead and hung on to beat the Green Bay Packers Sunday afternoon.

After losing at home to Kansas City last week the Colts dropped to 3-5, two games behind division-leading Houston. They traveled to Green Bay in week 9 to play the Packers, 4-3 on the year and 2-2 since their early bye week.

When the game ended it was with the underdog Colts going home victorious, after building an 18-point lead only to squander most of it in a furious fourth-quarter onslaught.

Andrew Luck was not at his best early. He threw two first-quarter interceptions, Luck’s first multi-interception game in 2016 and his third and fourth turnover in two weeks. But an opening kickoff return for a touchdown (Jordan Todman) and good field position put Indianapolis up 14-3 before the quarter ended.

The rest of the first half featured two long drives resulting in touchdowns, one for each team. The Packers scored as time expired in the first quarter on a long pass on a free play, Rodgers beating Darius Butler in coverage downfield. Butler and Rashaan Melvin played well Sunday, as the Colts used four cornerbacks extensively (including Patrick Robinson and Vontae Davis).

After punts back and forth the Colts returned the favour to close the half, a sideline grab by Moncrief with 11 seconds remaining. The half-ending drive was Indianapolis’s best of the day, going 3/3 on third downs with strong play from Jack Doyle and Frank Gore.

The second half was all about the defense.

Indianapolis’s offense went six plays for 20 yards — total — in the frame, compared to Green Bay’s 20 plays for over 100 yards. But the Packers failed to capitalize for a number of reasons; first a sack by David Parry and then an inteception by Darius Butler. Then it was Parry stuffing Green Bay’s run game, and Melvin and Clayton Geathers holding up in coverage deep. By the time Luck and Indianapolis’s offense came together early in the fourth it was still a 24-13 game.

It could have been far closer.

Frank Gore’s second rushing touchdown of the game was a big one, capping off Indianapolis’s first meaningful second-half drive. It gave Green Bay the ball back with 9:35 remaining down by 18 points.

They scored 13 — two touchdowns and one failed two-point conversion — but were unable to wrestle the ball back from Luck in the final minutes, as Indianapolis converted two short third downs with big completions to Jack Doyle and T.Y. Hilton. The second came under two minutes and effectively ended the game.

GREEN BAY, WI – NOVEMBER 06: Frank Gore #23 of the Indianapolis Colts celebrates after scoring the game-winning touchdown against the Green Bay Packers at Lambeau Field on November 6, 2016 in Green Bay, Wisconsin. The Colts defeated the Packers 31-26. (Photo by Jonathan Daniel/Getty Images)

Next week: BYE. The 4-5 Colts will still be watching their division anxiously; the Titans host the Packers, and the Jaguars host the Texans. The ideal outcome would be victories by Green Bay and Jacksonville, pushing the Colts within a game of the division lead. Conversely, wins by Houston and Tennessee will hurt.

Playoff implications: the Colts still play Houston, Tennessee, and Jacksonville at home this season. While the AFC West dominates the wildcard race (three teams sit at 6-2) the Colts will be hard-pressed to lose the division and still make the playoffs — so those final divisional games will likely decide Indianapolis’s fate one way or another. The first — against Tennessee — comes after the bye, during week 11.