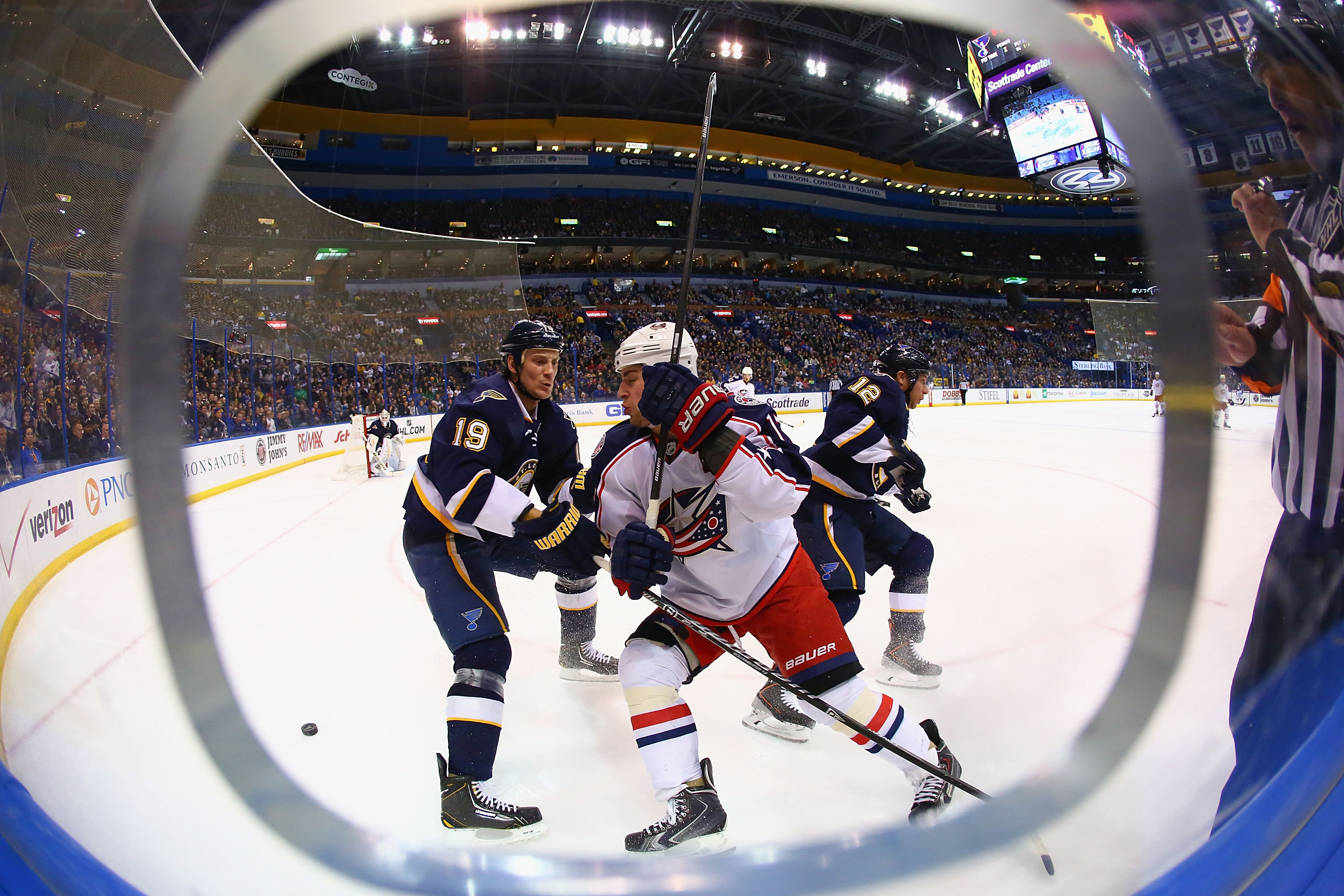 You had to know after a dazzling offensive performance like the Jackets had Friday over Montreal, that Saturday’s match against St. Louis was going to be a downer by any comparison. As much as Friday was a “you can’t miss this game,” Saturday’s effort may have made it okay to split your sport watching attention between hockey and another sport of your choice.

But somehow Columbus managed to squeak out a point against a talented Blues team thanks in no small part to the inaugural start of the season by Curtis McElhinney and his 28 saves. It was also a night when young Josh Anderson quietly became the team goal scoring leader adding a third tally to his two goal total from Friday.

Let’s take a look at some superlatives.

It’s just one game, of course. But Curtis McElhinney came in to backstop the Jackets on the second half of a back to back in interesting circumstances. It was McElhinney’s first start of the season, making Columbus the last of all 30 NHL teams to turn to a second goaltender. The question of who would back up Sergei Bobrovsky had been openly debated throughout the off-season, camp and through the first nine regular season games when McElhinney saw nary a second of ice time, and it was common discussion to contemplate if when Bob needed a rest, if Columbus would call upon its two talented young goalies in Cleveland: Joonas Korpisalo or Anton Forsberg. After all, McElhinney had an 89.18% 5v5 SV% last season ranking him last among the four players who took the net in union blue.

But “Mac,” who was praised by John Tortorella in his post game comments for how he dealt with the waiting game, looked calm and composed in net and was the main reason why Columbus, who could muster just 41.18% of all 5v5 shot attempts and gave St. Louis four power play opportunities, was able to stay close in this game. Particularly in the second frame (when St. Louis had the largest rush of shots with 15 on target), McElhinney came up big and his huge stop in the third against Jori Lehtera earned the point Columbus would take home. (I would link the video for you but NHL.com is a nightmare).

Is Curtis McElhinney a starting goaltender? No. But his performance in this game eased the fears of some who may have quietly been asking if Bobrovsky could play 81 games this season.

The Good but…: Penalty Kill.

The Jackets penalty kill remains third in the league today after another strong performance killing all four of the man advantages the team allowed the Blues. But three of those opportunities came on hooking calls – the kind you don’t want to see repeatedly from your team. Overall the Jackets are 32nd in the league in times shorthanded (32) but you just don’t enjoy penalties that come from cheating the play with your stick over skating into position or play.

In Torts’ post game comments, with measured, but obvious frustration, the head coach highlighted what he sees as lacking.

“For this team to make the right steps to go where we want to go, as we continue to build the club, we cannot see that again from some of these guys as far as the lack of give in certain situations,” said Tortorella.

Through ten games, Columbus’ point leaders are Alexander Wennberg, Nick Foligno and Zach Werenski. The top goal scorers are Josh Anderson, and then Foligno, Scott Hartnell and Cam Atkinson tied for second. Boone Jenner and Brandon Dubinsky have yet to tally a goal. Brandon Saad, who Torts has wanted to give more PK time, may have been a bit soft on Tarasenko in the final minute of overtime last night to give the talented Blues forward a clean view for the ultimate game winner.

Torts has talked repeatedly about the value of infusing this team with young, hungry talent and it is easy to infer that a big part of that is pushing the players who have been in Columbus a while. What comes of this, who knows, but this was Torts’ quote from post game Saturday.

“I keep putting (some top guys) out on the ice and kick myself in the (butt) now. It’s wrong. It’s wrong to see some guys give absolutely everything they have and to watch what Nick did and, if I’m a teammate of his, I’m going to get behind him and do everything I possibly can. I did not see that enough from our top guys.”

Tweet(s) of the Game.

I can't be the only one who was terrified for Foligno there… fighting way above his weight class against Reaves. Handled himself well.

I'm not one to believe that fights cause momentum changes, but boy I hope that fight is the one that actually does it. https://t.co/u4QAedA4FF

The Jackets are still 5-3-2, and sit at 14th in the league right now. They’ve won three of their last four and Wednesday provides another chance to get back on track when Anaheim comes to town.