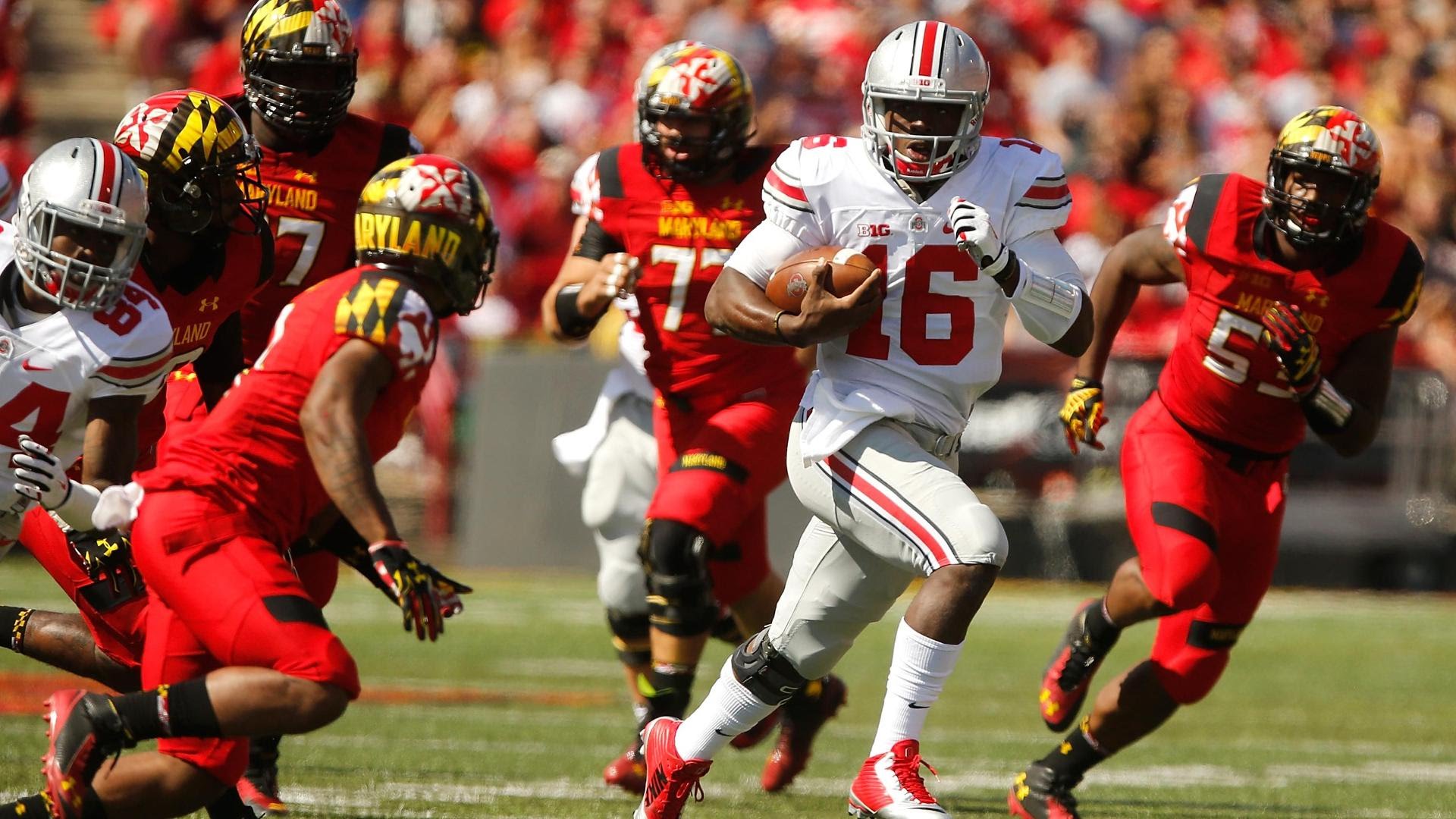 Ohio State travels to College Park, Maryland Saturday to take on the Terps in a 3:30 PM kick. This is only the 2nd time the Scarlet and Gray have made the trip to Maryland, and is a great chance for the Buckeyes to play in front of all the fans and alumni on the east coast.

As much as we would love to see the best games in the Big Ten, Maryland and first year coach DJ Durkin are simply over-matched in this contest. The coaching and the talent level differences between these two teams is on par with the Ohio State/Rutgers match-up earlier this year.

While some will see this as a glorified scrimmage and a chance to perfect some things that have been worked on in practice, Maryland is not going to be a walk-over, despite how they looked last weekend in Ann Arbor. Maryland is fighting to become bowl eligible, which means they need to win this weekend, next weekend verses Nebraska, or in the Big Ten East slap-fight that is their season ending match-up with Rutgers.

Can Ohio State stay focused enough to execute their game plan? Can they continue to not look ahead to the Michigan State and Michigan games coming up next? Can they look like the team that played Nebraska and not the team in State College?

The Turtles are led by first year head coach, and former Urban Meyer assistant DJ Durkin. Durkin, a 2001 BGSU graduate, served on Meyer’s staff as a graduate assistant at BG in 2001-2002, and again as special teams coordinator and linebackers coach at Florida in 2010.

Prior to taking the head coaching position in College Park, Durkin was the Defensive Coordinator for Jim Harbaugh at the University of Michigan. Durkin has a reputation around college football for leading stout defenses and being a great recruiter.

Last week, Maryland lost to Michigan in Ann Arbor, 59-3, in a blowout game in which starting QB Perry Hills was knocked out of. Maryland is currently 5-4 on the season, and 2-4 in Big Ten play.

Maryland is led on offense by senior quarterback Perry Hills, who Buckeye fans may remember as the quarterback who dashed the Buckeye’s defense for 170 rushing yards and 3 TDs, setting a Maryland quarterback rushing yardage record the last time these two programs faced off in Maryland (2014). Hills, who re-injured his throwing shoulder in Maryland’s game last week vs. Michigan, is currently listed as Day-to-Day.

The Terps also have an explosive two headed rushing attack. Their leading rusher this season is sophomore Ty Johnson, checking in with 635 yards. His running mate is freshman Lorenzo Harrison, who is on pace to set a new school record for rushing yards by a freshman. Harrison needs just 57 yards to rewrite Maryland history, and break LaMont Jordan’s 19-year-old school record of 633 yards.

Last week, The Maryland offense accumulated 367 yards of total offense against No. 2 Michigan. This is the second most yards against the Wolverine defense this season. Senior quarterback Caleb Rowe came in for the injured Perry Hills in the second quarter, and completed 12 passes for 203 yards. While there is an obvious drop-off from Hills to Rowe, the Terps look to be able to move the ball no matter who is taking snaps from center.

In the defensive backfield, Maryland is led by Senior cornerback Alvin Hill. Hill leads the team in inceptions (2) and pass break ups (4). Last week against Michigan, Hill had a career-high nine tackles. He is also the only defensive back to start in all nine games this season.

As a unit, Maryland is very stringent on trips to the Red Zone. They currently rank 20th in the nation in points allowed in the Red Zone, although that stat leaves them ranked 6th in the Big Ten. This defense also ranks 30th in the country in passing yards allowed per game, giving up just 204.2 yards through the air each week. Last weekend’s loss at Michigan was the first time this season the Terps have allowed a 300-yard passing game this season.

On special teams, Maryland and Ohio State both rely on the Punter from Down Under. Maryland freshman punter Wade Lees, much like Ohio State’s own Cameron Johnston both hail from Australia. The connection to Columbus and Urban Meyer doesn’t stop there, either. Durkin’s Punt Return team also places a heavy emphasis on blocking kicks. They are one of only 3 teams in the Big Ten with two blocked punts this season.

Ohio State comes into the match-up in College Park following one of Buckeyes’ best offensive games under Urban Meyer. The 62-3 win over then #10 Nebraska included 590 total yards on offense. The 62 points scored by Ohio State where the most ever scored against a Top 10 opponent in Ohio State History.

Meyer’s Buckeyes come into this game ranked 5th in the latest College Football Playoff rankings, and 6th in the AP Poll.

Ohio State is led on offense by Junior QB J.T. Barrett. Barrett has continued to rewrite the Ohio State record books this season. He already has set the school record for touchdowns accounted for and currently sits at 94 for his career. Barrett is just two touchdowns shy of setting a new all-time Big Ten record in this category, which would move him ahead of former Purdue QB Drew Brees.

Last week, OSU All World Back Curtis Samuel earned Big Ten Co-Offensive Player of Week honors, after his 173-all-purpose yard night against the Cornhuskers. Samuel also had two touchdowns during the record-breaking evening for the Buckeyes. Samuel has been vital to the Buckeyes offense this season, and currently sits as the only 500/500-yard player in the nation. The junior has 599 rushing yards to go with a team-best 676 receiving yards.

On defense, the Silver Bullet front seven is led by Junior LB Raekwon McMillan and Sophomore DE Sam Hubbard. Kwon, the Lott Award semi-finalist, serves not only as a captain, but also as the heart and soul of the unit. He currently has 54 tackles on the season, along with 4 passes broken up and a forced fumble. Hubbard, the highly touted safety turned defensive end, has 30 tackles on the season.

In the defensive backfield, the Buckeyes are led by everyone. Along with the two Pick-6 interception returns last week by Malik Hooker and Damon Webb, the 2016 Silver Bullets have set a school record with six total Pick-6 returns this year, breaking a 3 way tie they previously had shared with the 1997 and 1986 units.

Three (and a repeat) Key Match-ups

This is the same key match-up from the Nebraska game. Although Mike Weber is nursing a sprained shoulder, he is expected to play this weekend. But as it was documented so well before last week’ game, equal and timely distribution of touches among Ohio State’s two biggest non-quarterback play-makers is essential to success.

As mentioned above, the Terps have 3 explosive options out the backfield that can dash the Ohio State Defense. Hill’s health will be a major factor in this game, depending on how much and how well he can play. If he is healthy, the Terps will attempt to exploit their strength vs the still young, and pass rush heavy, front seven. This also presents a game planning challenge for the defensive coaching staff, as they have to prepare for both of the potential starting quarterbacks Maryland could trot out on Saturday.

A major part of the success the Buckeyes had Saturday night against Nebraska was due to J.T. trusting his teammates to help him succeed. When things go well, there is not a better quarterback in a better offense than Barrett. When things start to break down – the pass protection, the routes, or the ability to get open, J.T. has shown an anxiety in the pocket and a penchant for tucking the ball and running. This shouldn’t be much of a problem against a young and inexperienced Maryland secondary, but it will behoove the Buckeyes if Barrett can continue to find the rhythm and trust he had Saturday night. This will be big next week versus Michigan State, and bigger in a couple weeks in The Game.

Ohio State versus The Schedule

While everyone fully expects Ohio State to roll to an easy win Saturday, it will be important to the staff to make sure this young team stays in this game. This has all the classic settings of a “Trap Game”. Maryland, while not a great team by any stretch of the imagination, is not terrible either. They are looking hard for win #6 to reach bowl eligibility, and will be looking to avenge last week’s beat-down by Michigan. It is vital that Ohio State stays in this game and executes, without looking forward to the MSU or UM games looming large on the November schedule.

The Buckeyes are in a better position this week than they were last week, in regards to making a playoff run. Knocking off a 2nd Top-10 team in Nebraska has helped solidify their position as the next team to make the leap into the final four. As mentioned last week, “Winning out will ensure their place among the top-four teams. Coach Meyer has said over and over the past two weeks they are not thinking about the playoffs but it is in the back of their minds.”

I trust in the coaching staff’s ability to keep this young team’s attention and focus on point this week. The ability Urban Meyer has to refocus after a mid-season swoon is unmatched in the world of college football today. I think the execution will continue to be on point, and this will be an early snoozer for the Buckeyes. The talent level difference between the two teams is just too much. And although no one will admit it, this is a bit of a redemption weekend for Ohio State. This time, they get to play a team that Michigan has crushed, and they will want to return the favor from Rutgers earlier this season.

Maryland will, much like Rutgers, eventually be a decent enough ball club. Coach Durkin will get some talent in, and turn the Turtles into a bowl-eligible squad year-in and year-out. Unfortunately, they are still a long way away from being able to compete with the top quarter of the Big Ten.

I think the Buckeyes have a little letdown/hangover compared to the energy and excitement last week in Ohio Stadium. But I still think Ohio State knows they want to beat Maryland by a better score than Michigan did. I see this game ending 61-3…because Ohio State will get that 2-point conversion and be able to one-up Michigan.