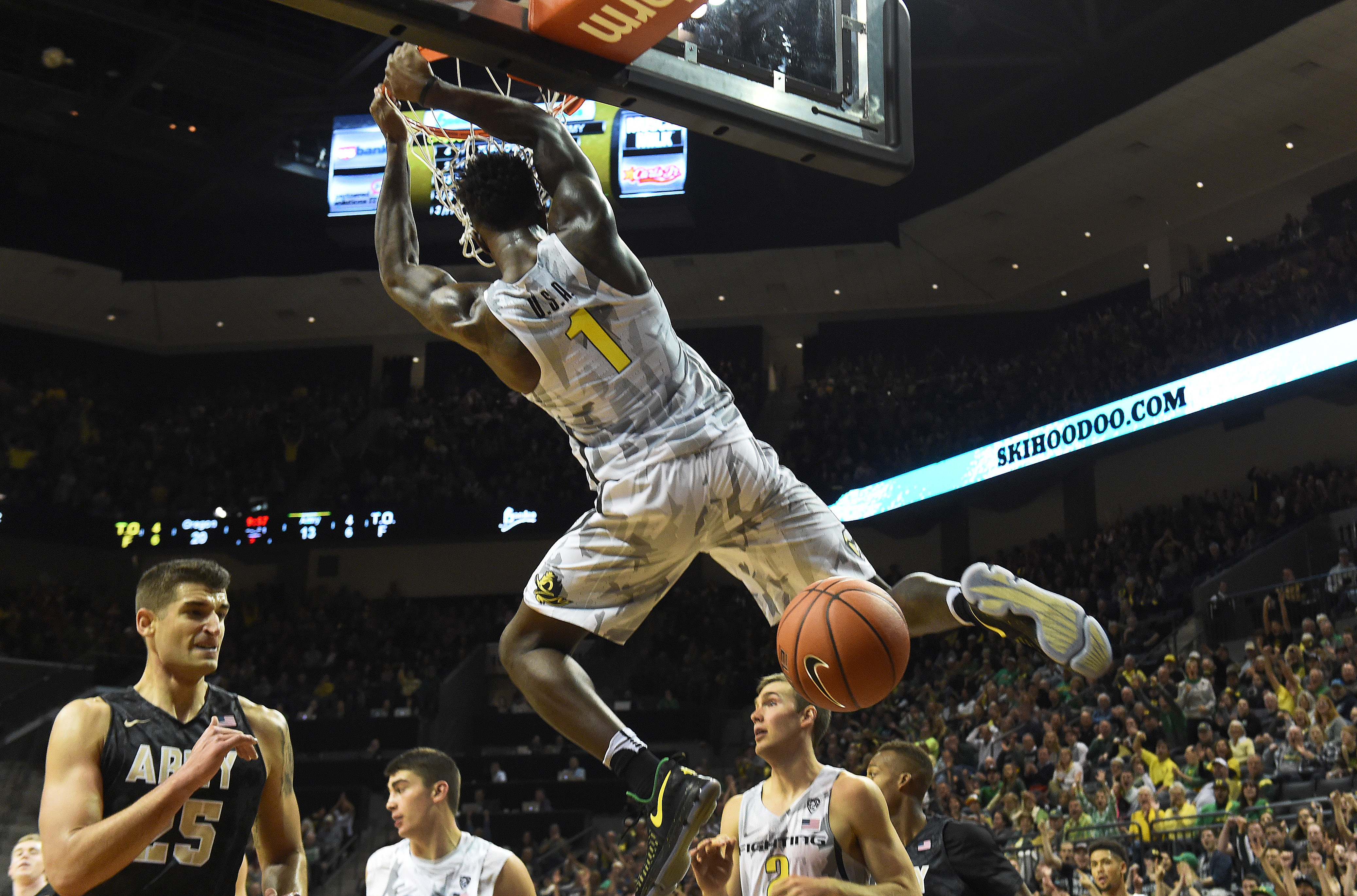 EUGENE, OR – NOVEMBER 11: Jordan Bell #1 of the Oregon Ducks dunks the ball in the first half of the game against the Army Black Knights at Matthew Knight Arena on November 11, 2016 in Eugene, Oregon. (Photo by Steve Dykes/Getty Images)

Before a sold out, 12,364, Matthew Knight Arena crowd the #5 Ducks got their season started with a victory that leaves mixed feelings.

The Ducks got their first 8 points of the game in a manner that I’ve never seen or heard of any team doing before. Tyler Dorsey hit his first shot of the season, a 3, was fouled, and made the free throw, for a 3-0 Oregon lead. Army responded with a 5-0 run to take their only lead of the game, 5-4.

On their next trip down the court, Dorsey found Chris Boucher open behind the 3 point line; Boucher hit the shot and again the free throw to complete the box set for the Ducks, Dorsey hit another 3, but there was no accompanying foul, Ducks lead, 11-5.

Army closed it to 11-7, before a 21-8 run, started by a beautiful outlet pass from Peyton Pritchard to Kavell Bigby Williams for a dunk, stretched the lead for the Ducks to 32-15, with 7:40 to play in the first half.

A jump shot by Boucher Jordan Bell gave the Ducks their largest lead of the game, 49-29, with: 50 left. Pritchard fouled Thomas Funk of Army on a 3 point shot just before the buzzer, Funk converted two of his free throws and the Ducks led, 49-31 at the half.

The balance is nice to see for the Ducks. But it also shows just how much better the team will be when Dillon Brooks returns. Brooks has the ability to take over the game while still involving the other players. Without him the offense is more improvisational and not as crisp. Bell did show a marked improvement in moves around the basket, Sorkin will be much more impactful and Pritchard looked very comfortable in the game playing both shooting and point guard equally well.

The Ducks never looked like they really stepped on the gas pedal yet still scored 91 points. Army was never in a position to win the game but they stayed in reach through their disciplined play and toughness. The Ducks go to Waco for an early road test with Baylor next Tuesday at 12:30.