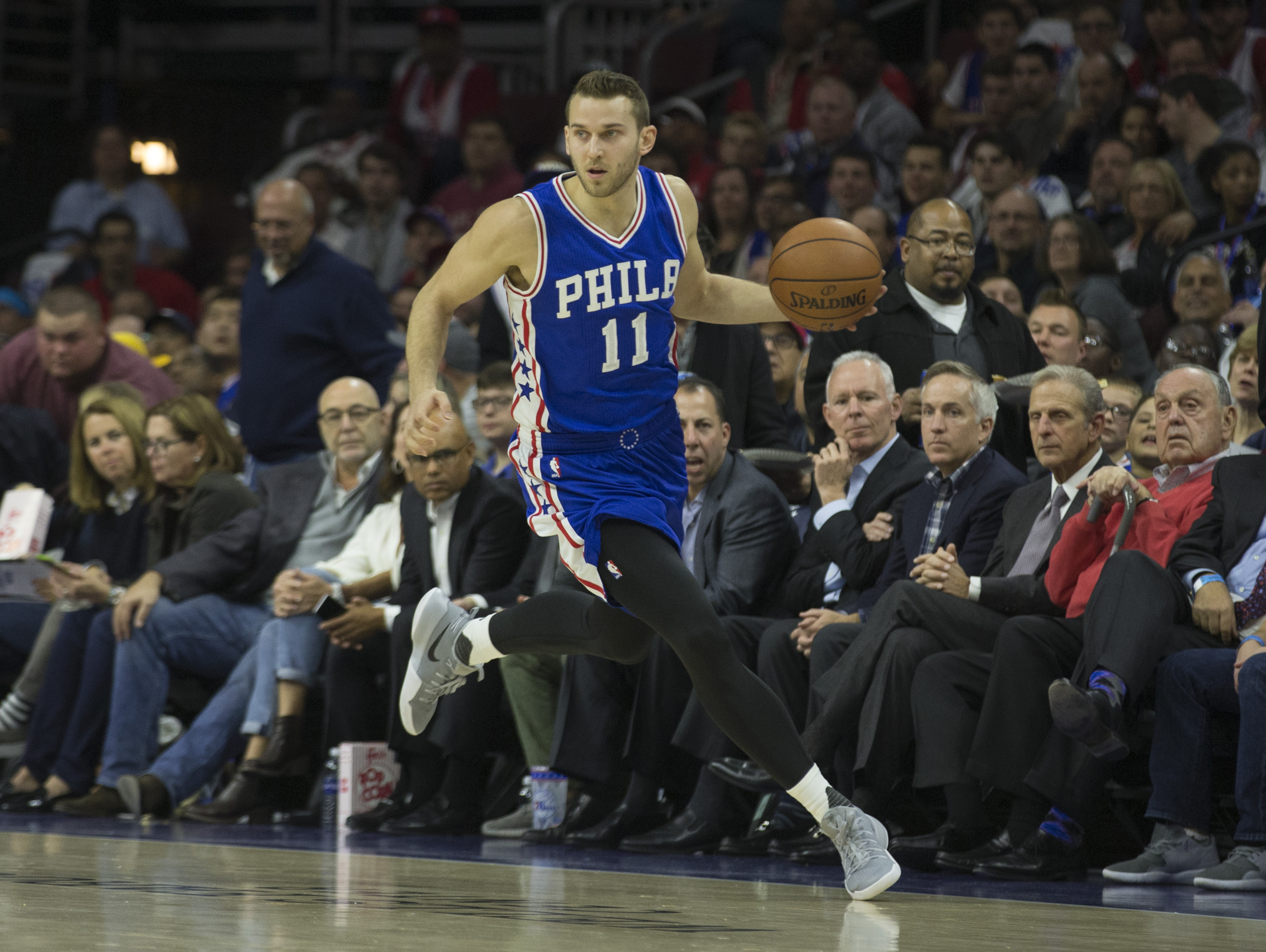 After getting blasted by the Houston Rockets 115-88 last night at the Toyota Center, the Philadelphia 76ers are now 1-9 in their first ten games. Sure, that doesn’t appear great at all, but the Sixers did win a game in November for the first time in three years. That’s encouraging, right?

Yes. The Sixers have a point differential of -13.3 in those ten games, and there are plenty of other bad things to point to: Robert Covington’s slow start and Jahlil Okafor’s continued ability to frustrate me on a nightly basis. (Okafor’s average +/- this season in games he’s played is -6, and he’s gone -20 or worse twice this season, already.) It’s a good thing there are bright spots, though. Joel Embiid has proven thus far that he is everything we’ve hoped for and then some. He leads all rookies in points, rebounds and three-point percentage. (That last one’s NOT a typo.)

Another glimmer is the decent play of one Nikolas Tomas Stauskas. (I’m probably going to be ducking vegetables being thrown at me for a couple of days, but that’s okay. Bring it.)

I get it. Stauskas hasn’t lit the NBA on fire after being part of a Michigan team that went 28-9 and advanced to the Elite Eight against Kentucky. Stauskas averaged 17.5 points per game, shot over 40 percent from three, and was the Big Ten’s Player of the Year in 2014.

Before the draft, fans and draft heads were treated to a YouTube video where Stauskas shot 92 percent from three and 46 in a row in the rain. There’s a reason, in my opinion. He was drafted by the wrong team at the wrong time: the Sacramento Kings at basically any point past the Chris Webber/Peja Stojaković/Jason Williams era.

Stauskas was traded to the Sixers in the summer of 2015 along with Carl Landry, Jason Thompson, a future first round pick, and the rights to swap first round picks in 2016 and 2017, in exchange for the rights to Artūras Gudaitis and Luka Mitrović. It was another one of those Sam Hinkie trades where the Sixers got huge amounts of value for almost nothing. (I still consider this Sam Hinkie’s masterpiece trade.)

Stauskas’s first year in a Sixers uniform was rocky because of a right tibia stress reaction as well as back spasms that hindered his ability to participate in a full training camp. He finished off the season strong scoring 10.1 points while shooting about 31 percent from three (far from his Michigan averages).

The moment in time where I said to myself, “Okay, Stauskas MIGHT be okay,” came on April 2, 2016 against Indiana when Stauskas took a pass from T.J. McConnell on the right wing, dribbled past the Pacers’ Solomon Hill, drove the lane, and put Myles Turner on a poster.

The faces on Monta Ellis and George Hill said it all. No one was really sure where this came from, but it was a great moment for Stauskas and the Sixers. Maybe this was the turning point. Perhaps now, Stauskas is completely healthy and can provide good minutes for a young team.

Ten games into the 2016-2017 season, and Stauskas has looked MUCH better than he did last year. He had a healthy training camp with no problems, and he’s driving to the lane with much more confidence than at any point last year.

Forty percent of Stauskas’s shots have come within ten feet of the basket (vs. about 25% last year), and dribble penetration is always good. Stauskas’s three-point shooting is also better (35.5% vs. 32.6% last year). The percentage doesn’t look like much, but there’s an increased personal confidence in his shooting.

Take the video below, for example, in a game against the Utah Jazz:

Last year, Stauksas wasn’t doing that. If he was, that shot (likely) wasn’t going in. That’s what confidence can do for a player. Stauskas didn’t have that level of it last year. He seems to now, and we’re seeing it on the court.

There’s not a likely chance that Stauskas will ever see more than 30 minutes in a game for the Sixers barring crippling injuries, but it’s encouraging to look at Stauskas’s per-100 possession stats in ten games: 17.1 points, 5.1 rebounds, and 2.3 assists, shooting 35-37% from three and a true shooting percentage of .615. That’s an incredible improvement.

Will Nik Stauskas continue with his good start? That remains to be seen. Jerryd Bayless is coming back from injury (as is Nerlens Noel), and if Ben Simmons indeed plays in 2016, that could really jump start this Sixers’ offense even more.

If Stauskas’s numbers and performance declines, then he’s only on the hook for $4 million next season before the team options become available for the rookie deal. By then, Furkan Korkmaz (the 26th pick in this past draft) will have two seasons of Euroleague ball under his belt, and he takes that spot.

In a season of a lot of lowlights in ten games, Stauskas is a bright spark that not many are paying attention too.