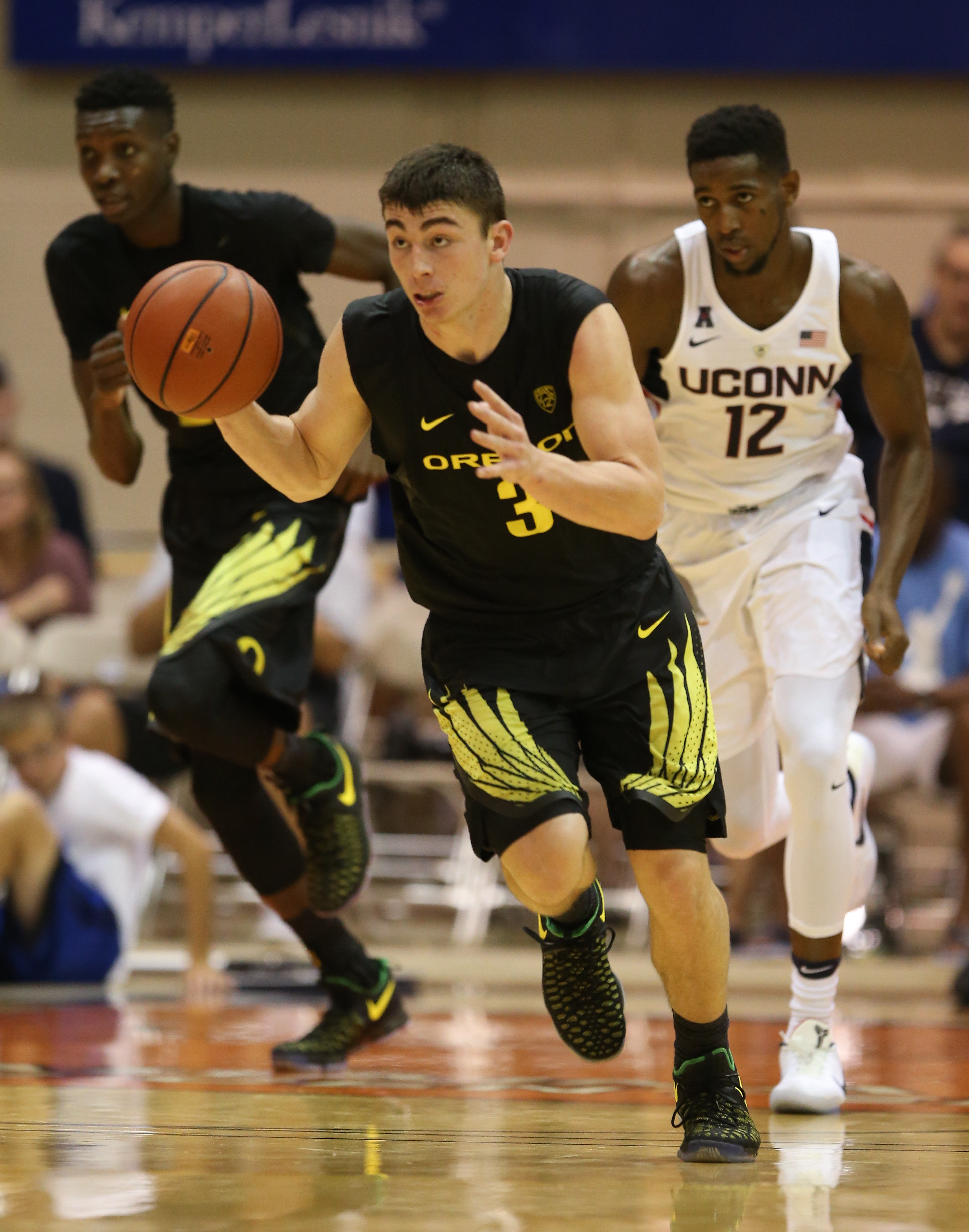 LAHAINA, HI – NOVEMBER 23: Payton Pritchard #3 of the Oregon Ducks dribbles the ball during the second half of the Maui Invitational NCAA college basketball game at the Lahaina Civic Center on November 23, 2016 in Lahaina, Hawaii. (Photo by Darryl Oumi/Getty Images)

For the first time this season the Ducks win consecutive games and clinch 5th place in the Maui Jim Classic. There were hopes for much more but winning this one makes the flight home a lot more fun. The game could not have started better for the Ducks with Dylan Ennis starting it off with an awkward shot that hit just the right place on the backboard and dropped through the net. Ennis found Jordan Bell underneath for a dunk, and it was 4-0. Payton Pritchard, starting again, nailed a 3, assist to Ennis, and it was 7-0, Oregon. Ennis got a steal and a breakaway that finished with him being fouled, making the basket and the free throw, Ducks 10-0.  UCONN finally got on the scoreboard with a pair of free throws, but Chris Boucher answered that with a 3, 13-2 Ducks, A dunk by Boucher, 15-3.  Back to back 3’s for Tyler Dorsey, and its 21-5 Oregon.  The Ducks hit their first 8 shots before UCONN knew what hit them. Jordan Bell connected on a jumper just past the midway point of the first half to give the Ducks a lead of 21, 30-9.  UCONN surged back and controlled the half the rest of the way, outscoring Oregon, 19-9, to make it 39-28 at halftime.

It was the best shooting for the Ducks by far; 29/53, 54.7% 9/21, 42.9 on 3’s. They out rebounded the Huskies, 35-26. Unfortunately, while the ball movement was much better than in previous games, it was still sloppy and resulted in 17 turnovers. The defense wasn’t as sharp; 28/58 overall for the Huskies; 6/23, 26.1% on 3’s is good; but there were far too many uncontested layups, and that wasn’t just in this game. Having the shot blockers is great, but the biggest reason for the slow start this season has been the other team having much to easy of a time getting to the basket.