Note: In an effort to add more international coverage to Project Spurs, we are introducing an international update column. We wanted to get someone to write it who really knows the international scene best and covers it regularly, so we turned to BallinEurope.com’s editor Emmet Ryan.

It was a big week for Adam Hanga, the Spurs’ stash playing with Baskonia in Spain and Euroleague. The Hungarian was pitted against Will Clyburn and Darussafaka Dogus from Turkey in an individual battle that was expected to be exciting. Instead, it turned out to be a bloodbath. Hanga’s big upside is his defensive presence and he was in fine form as Baskonia beat down the Istanbul club with unexpected ease. In 19 minutes Hanga had nine points and eight rebounds along with three blocks in a comprehensive victory for the club which is from Spain’s Basque region.

Of the three draft-and-stash players we’re going to look at regularly in this column, Hanga easily merits the most attention as he is both the most likely to come to San Antonio in the summer and the one with clearly the most potential to help the team. He essentially carried Hungary through to EuroBasket (the European championships) in surprisingly dominant fashion has been one of the best-at-the-few-things-he-does guy in Europe for the past two seasons. Clyburn’s been getting some talk of late regarding a NBA return, but on Friday he was a non factor in defeat as Hanga’s Baskonia won 73-52.

This oddly leads us to the matter of unfortunate timing. There were only two close games out of eight this week across Euroleague and none of them featured players on San Antonio’s radar.

Nemanja Dangubic is getting far more of a look for Crvena Zvezda from Belgrade, Serbia, this season than a year ago but he was on the wrong end of an 87-72 scoreline in Istanbul at the hands of Fenerbahce. Dangubic’s club offers the upside of being a great spot for developing talents as Zvezda’s comparatively small budget means the club needs to put its faith in youth. At 23, Dangubic isn’t that young but he made no impact in this outing against one of the sides expected to challenge for the championship at season’s end. He followed that up with another quiet display in the Adriatic league (essentially a league comprising the best teams from what used to be Yugoslavia and a few other countries). His Zvezda side recorded an important road win at Buducnost (from Montenegro) but Dangubic only managed one point and five boards in 26 minutes.

That brings us to the far more promising situation of Nikola Milutinov at Olympiacos. The Greek club’s injury troubles have given the 21 year old Serbian center more time on the floor in the last few weeks. He managed four points and three rebounds in 11 minutes of a blowout 88-59 win over Russian outfit Unics Kazan on Friday and logged 15 minutes in a blowout victory over Rethymno in the Greek League. Again, his numbers weren’t mind blowing at four points and four boards, but right now it’s about getting time on the floor.

All of the assorted regional leagues and national leagues along with their standards can be confusing so for reference in future columns here are the absolute basics for all three players.

Hanga: Plays a key role with a good team with a good mix of NBA calibre talent past and present, will likely make Euroleague playoffs, and the Spanish league is the strongest in Europe.

Dangubic: Plays on a competitive side in terms of defense but a fringe side for the playoffs that lacks the resources of richer clubs in Euroleague. The upside is that gives youth a chance against top tier opposition, and his club is the powerhouse of a regional league (Adriatic League) that has proven a breeding ground for NBA draft picks.

Milutinov: Plays for basketball royalty in Euroleague which is a likely playoff contender. That makes minutes a challenge but his club has some injury issues. The Greek League is top heavy, only his club (Olympiacos) and Panathinaikos are really all that strong. Their rivalry is known as the derby of eternal enemies (yes, very metal). With the exception of a championship won by AEK in 2002, every Greek title has been won by one of these two sides since 1993.

Most of these columns will just look at this trio but I’m going to try and introduce you to other Euros worth following. As a brief starter, Google Luka Doncic who is draft eligible in 2018 and widely expected to be a high lottery pick. 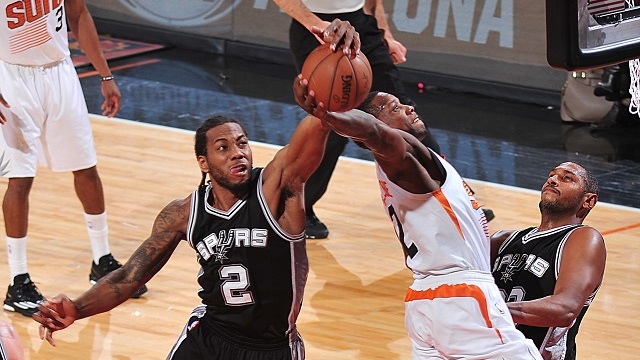 The key to beating the Spurs is to put Kawhi Leonard in the corner?

Just peep at these On/Off numbers for Kawhi and start scratching your head pic.twitter.com/ayzisDZFPf — BBALLBREAKDOWN (@bballbreakdown) December 12, 2016 Hello, operator? Can you patch...