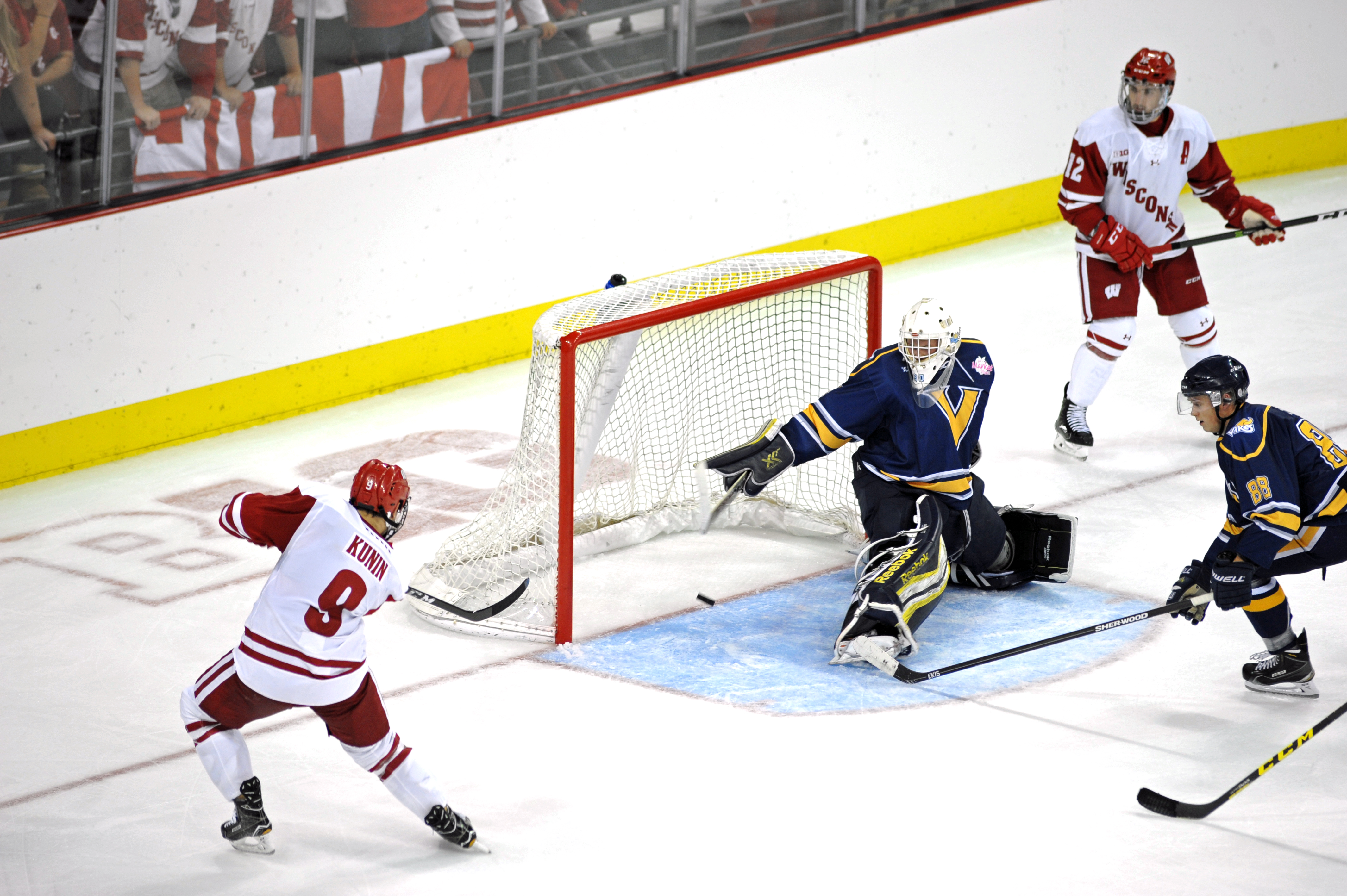 How do you top a 5-1 win in the program’s return from winter break? If you’re the Wisconsin Badgers the answer is to bring back your starting netminder and your gold medal-winning captain and do the exact same thing the next night.

After missing nearly eight games, Matt Jurusik returned between the pipes and handled his business. He saved 23 of 24 shots on the night and looked more and more sharp as the game went on.

But, no return was more anticipate than captain Luke Kunin back in the red sweater of Wisconsin. He returned to the ice on Saturday night after getting last night off to rest following a less than 24-hour return from the World Junior championships.

Kunin’s first night back didn’t disappoint, as the star forward just picked up right where he left off and put in two of Wisconsin’s five goals in a 5-1 victory for the sweep of the Michigan State Spartans.

The win gave the Badgers their first weekend sweep of the same opponent all season. Most importantly, however, the victory put UW up on top of the Big Ten conference standings alongside both Minnesota and Penn State at 3-1 in league play.

Wisconsin’s aggressive approach was led by Kunin off the opening face-off and it paid quick dividends.

UW lit the lamp just 33 seconds in to the game thanks to Seamus Malone’s wrister off the post on a break up the middle.

It was his seventh goal of the season, but couldn’t have been done without a team effort that started with a great check on the opposite end by Kunin. Wisconsin’s goal was assisted by Max Zimmer (4) and Grant Besse (14).

However, Michigan State didn’t fold this time around. Instead, they went to work and drew a power play before two minutes had even ticked off the clock in the period.

Michigan State wouldn’t waste its biggest opportunity of the period, with Carson Gatt (3) sneaking one right off one of Jurusik’s pads and in to the net. It was 1-1 at just the 3:41 mark.

It would be a period was not without some controversy either. With the period heading to the mid-way mark, Michigan State appeared to take advantage of a lucky bounce for a 2-1 lead. However, some quick action by Jurusik allowed him to glove the puck before it completely crossed the goal line.

It was called a goal on the ice though, and a replay decided no goal after a lengthly look at the play.

NO GOAL! Clutch save from @mattjurusik on this one!

Following the delay in the action things continued to settle down between these two teams. Not much separated the Badgers and Spartans, with the score tied up at 1-1 after the first period horn sounded.

MSU had a 12-9 advantage on shots and were up 14-10 on face-offs as well after one. However, it was the end of the Spartans advantage, as goalkeeper Ed Minney faced 35 shots, saving just 30 of them in the loss.

After seeing the returning Jurusik stoning two great Michigan State opportunities early in the second period, captain Kunin decided to make his mark on the scoresheet.

Kunin wasn’t done though, as he took a great pass from across ice and rocketed a one-timer from the top of the left face-off circle past Minney for his second goal of the night (13th on the season) less than three minutes after opening up his account for the night.

Did we mention how happy we are to have @lukekunin9 back with the #Badgers? pic.twitter.com/jjZmXu1a8V

At 3-1 heading in to the second intermission it felt like momentum had completely reversed itself in favor of the Badgers.

That played out in the third period, with Wisconsin unloading a 15-shot barrage on Minney and ending with two of those finding the back of the net.

UW’s two goal lead became three as Peter Tischke got just his second goal of the season, putting one in at the 7:53 mark of the final period.

It was all over but the final horn, and Michigan State played like it late in the contest. Wisconsin pounced and junior forward Matt Ustaski got his first goal of the season (seventh career goal) to make it 5-1 with just over five minutes remaining in the game.

The win also marked the 200th for the Badgers inside the Kohl Center, where they will return to action for the Border Battle with the Minnesota Gophers on Jan. 20-21. Both games will be televised by Fox Sports Wisconsin alternate channel.