<![CDATA[It’s time for Red’s Army “Fan Friday,” the weekly feature that introduces you to Celtics fans from all around the globe. If you’d like to nominate someone to be featured – including yourself – please email us at Redsarmy.com@gmail.com. Provide the person’s contact info and some brief details about the fan’s background as a member of Celtics Nation.

This week’s featured fan, Aaron, is not simply another Celtics fanatic-he’s also a sneaker connoisseur like myself. Aaron has acquired many Boston Celtics themed kicks over the years. Some rare player editions, and others actual game-worn shoes from current members of the team. But more on that later. You can check out Aaron’s impressive collection via his Instagram page. Here’s more on 23 year old Aaron from Singapore:

I was first a Basketball fan. I play Basketball for fun and watch highlights online casually. I liked a dude called Kevin Garnett and watch his highlights a lot. Years later (2010 I think) a Friend of mine got me into watching games and following the NBA on a regular basis. From then on I got into it and became addicted. The celtics were the first team I ever watched live on tv before and Kevin Garnett, the guy I watched highlights of a lot back then, was in it. So I decided to be a Celtics fan. From than on, Celtic fandom became like a religion to me. Honestly KG was what got me into the celtics and Basketball overall.

Kevin Garnett and Rajon Rondo. They are tied and I can’t pick one. Kevin Garnett’s intensity and love for the game was what made me love Basketball in the first place. You know kids on the courts having fun pretending they were Kobe or LeBron and some player? KG was who I was pretending to be on the courts. The chest pumps, the trash talk, the everything.(I never do any of these in actual league games I play in though). As for Rondo, his IQ and court vision are probably the best in the league, he know some  the game so well and he sees things on the court no normal human can. That said, Isaiah Thomas is really closing in to make it a three way tie for fav of all time.
Best Celtics moments and games:

My Favorite celtics moment is definitely from April 7th, 2016. It was a home game against the Pelicans. Sure it probably wasn’t the most exciting game. Nothing really huge happened in that game either. But it was my first live Celtics game at the TD Garden. Being from Singapore, we live on the other side of the globe from the states where nba games are played. I have watched the games on TV and phones hoping one day I will have the chance to go to Boston to watch my celtics live in person. 7 April 2016, my dream came true. To others it’s just a boring game between the Celtics and a bad Pelicans team who had lost Davis for the season. But as far as I’m concerned, best Celtic moment ever.

The Boston Celtics Fandom is not simply a person supporting a sports team, it’s a way of life. I may sound exaggerating but it really is. It has become such a vital part of my life, every morning when I wake up, the first thing I do is to look at celtics news or on game days, turn on to the celtics games. I appreciate the Celtics and all my fellow fans I talk to on twitter, they show me what unity really is. This is why the Celtics are so important to me.

As mentioned above, Aaron has a sick collection of kicks. Most notable are his Isaiah Thomas items. Aaron has many of the Kobe models that IT has rocked over the past two seasons, as well as a customized pair he made at Nike ID. They are modeled after the pair IT wore when he had his 52-point game back in December. Check out those in the gallery below, as well as an autographed, game-worn pair of Isaiah’s Nike Hypershift. 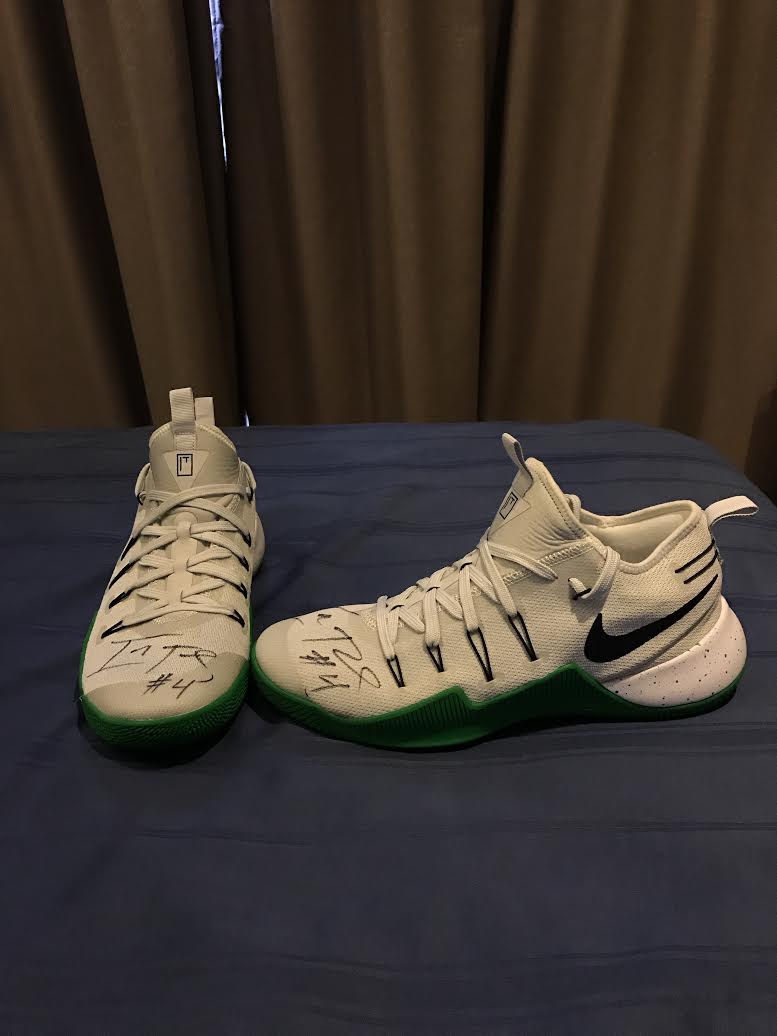 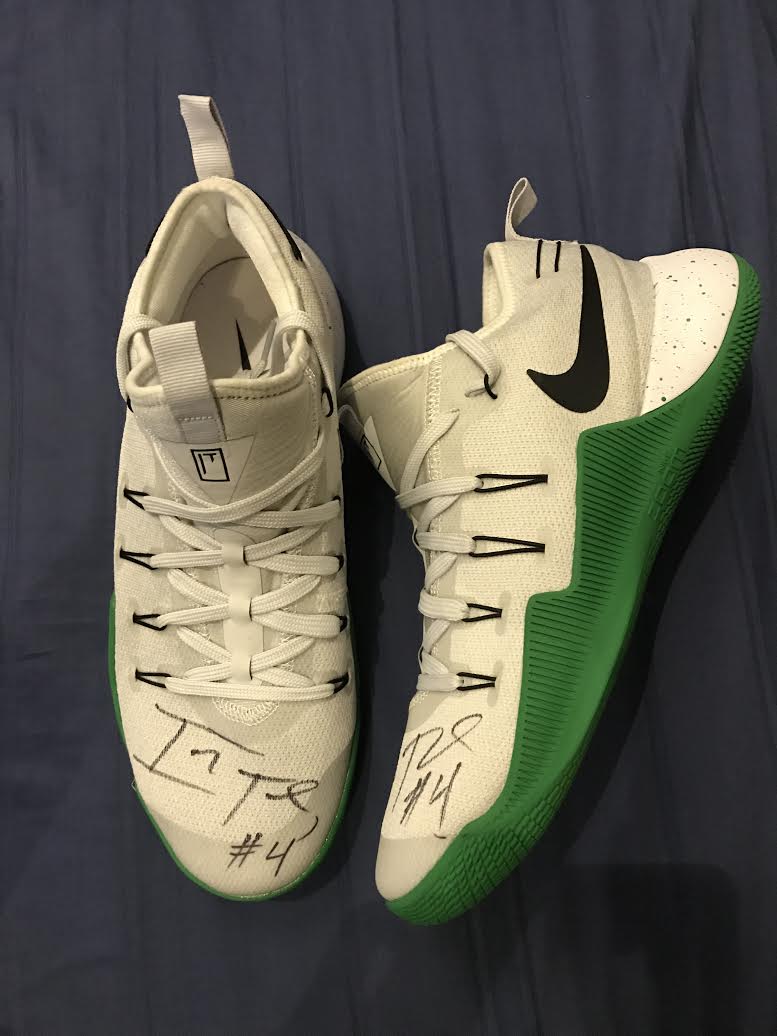 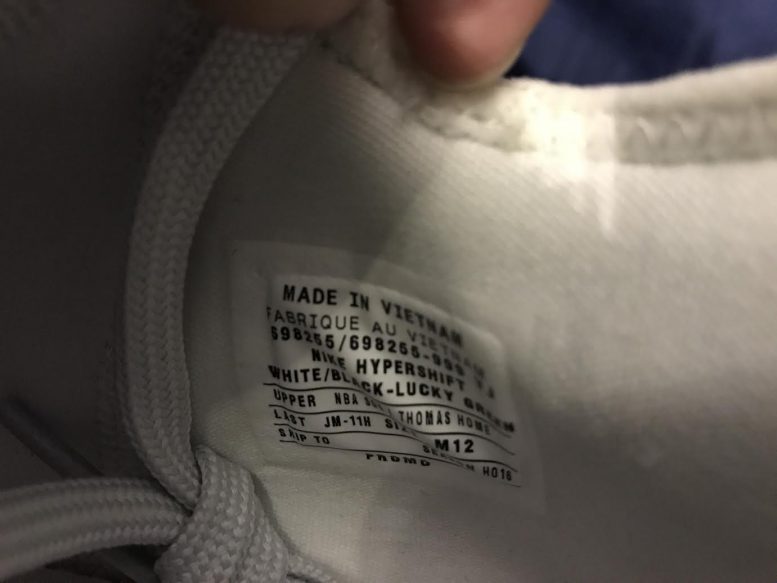 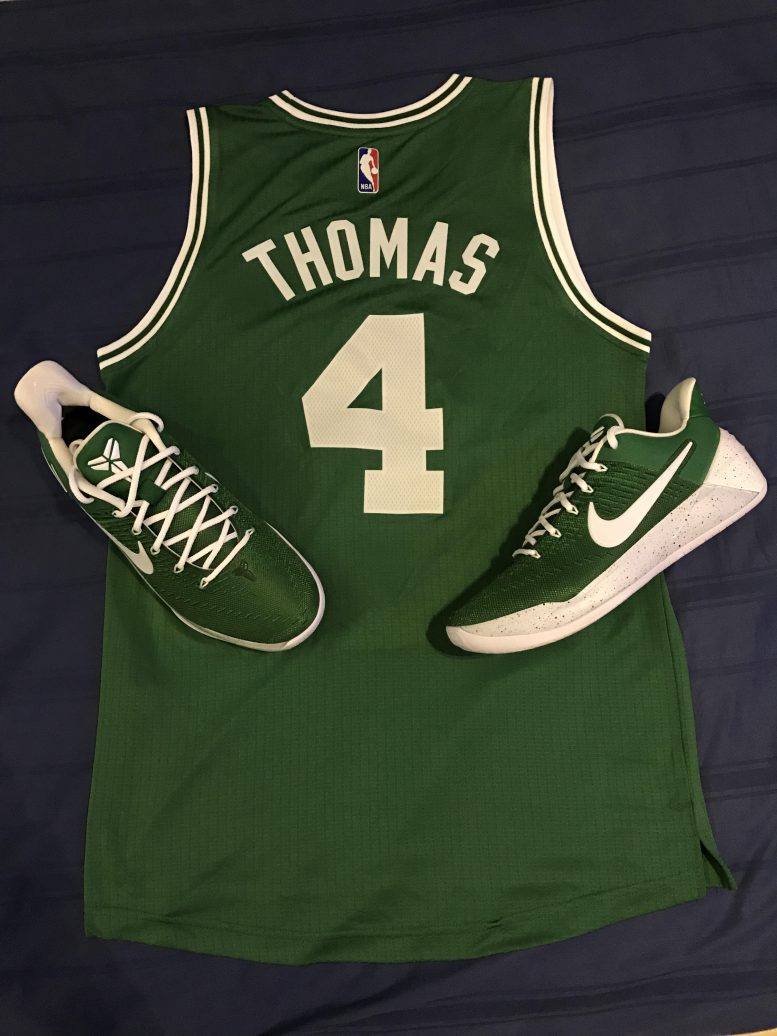 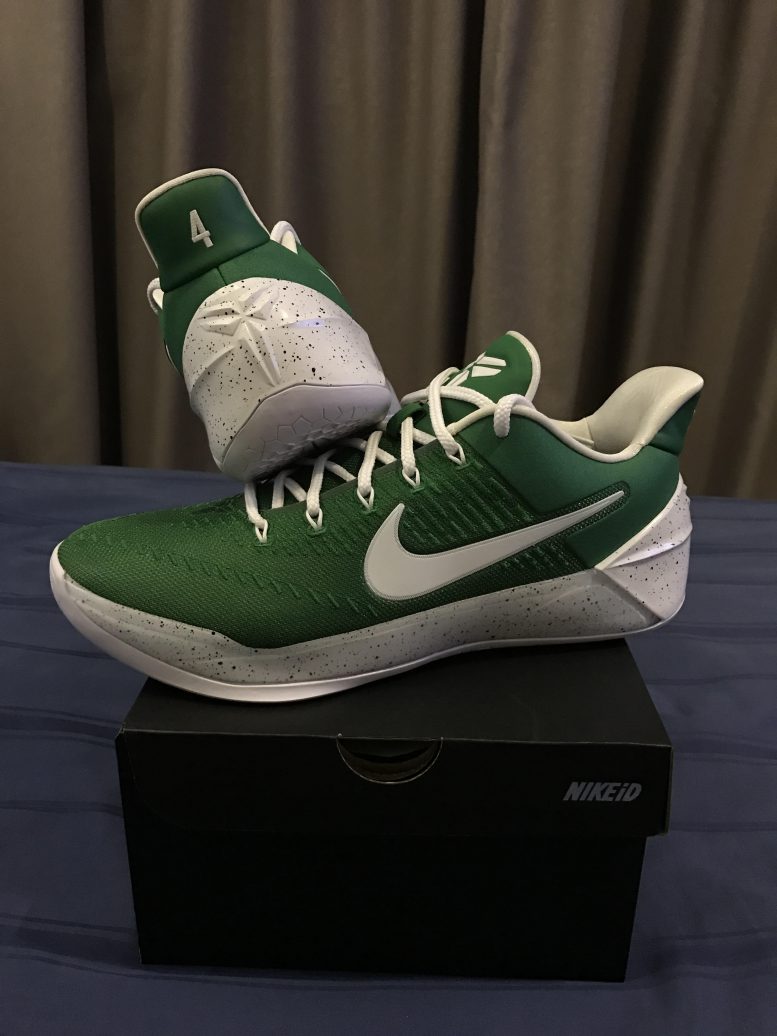 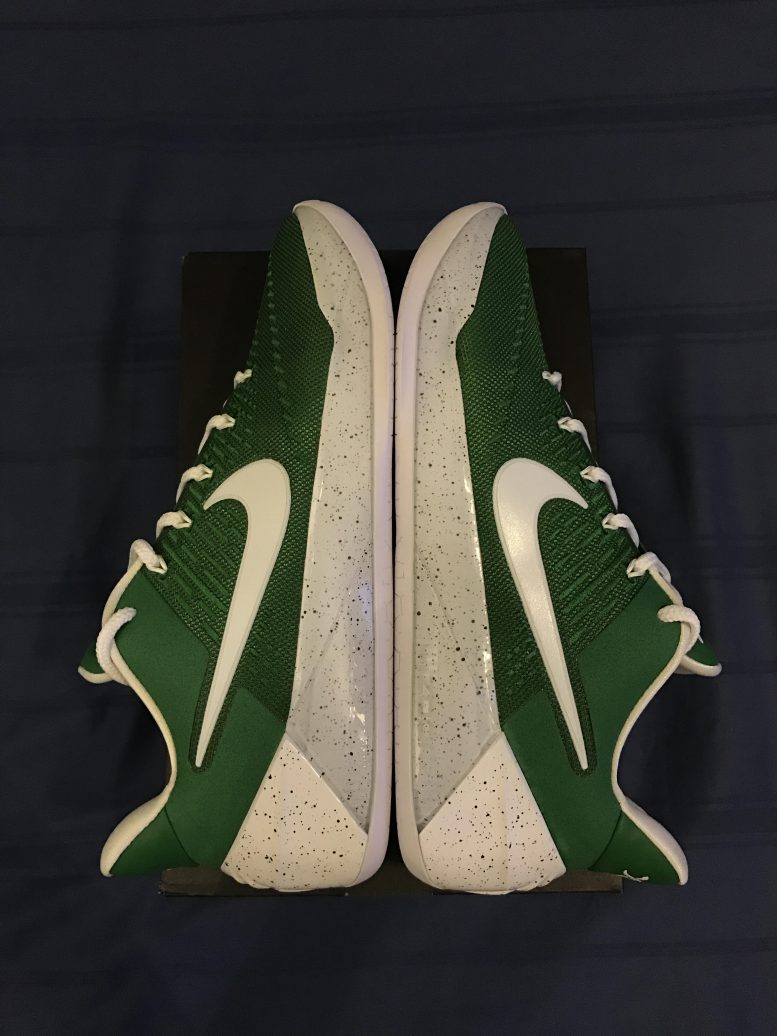 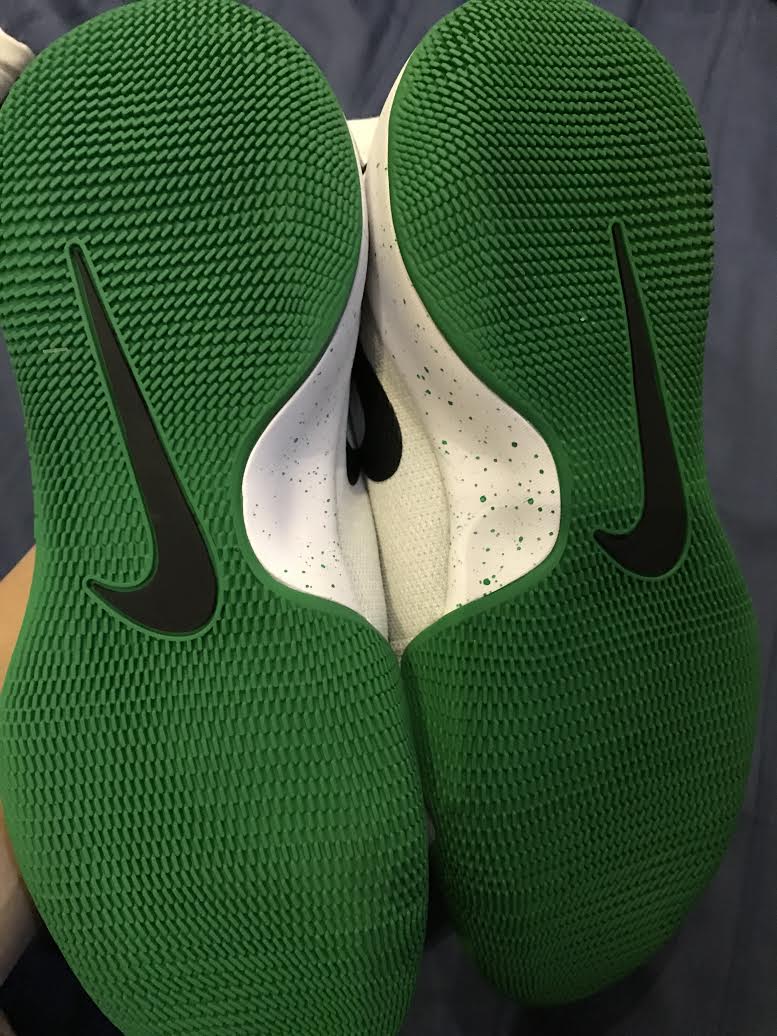 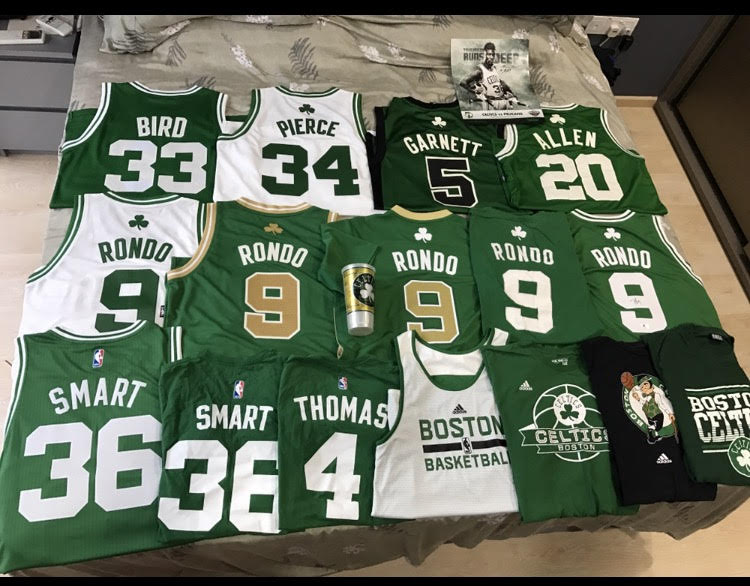