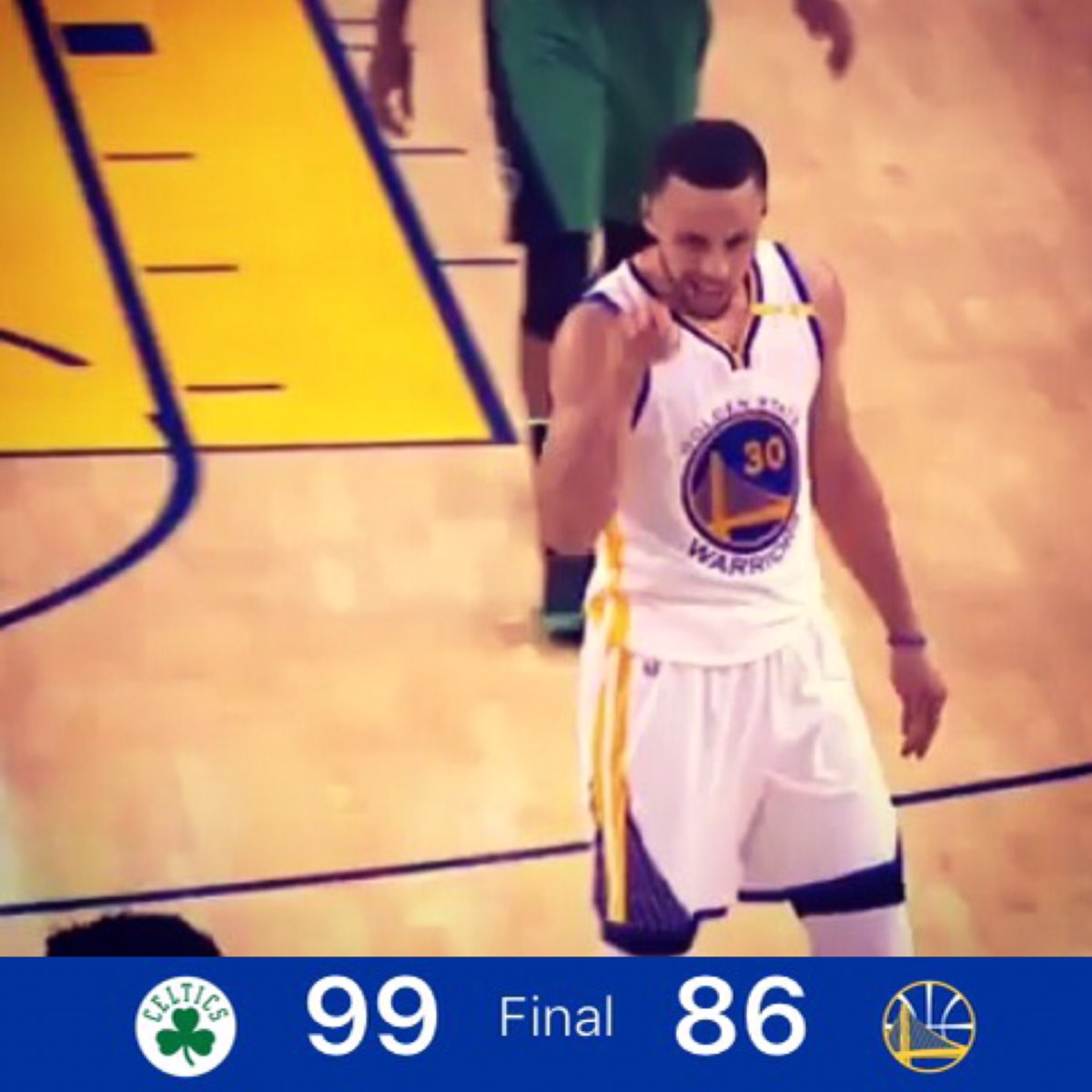 This is a continuation of the halftime recap of the Boston Celtics at the Golden State Warriors.

The Celtics got off to a good start as Isaiah Thomas scored and Amir Johnson followed that up with a triple, prompting Warriors head coach Steve Kerr to call an early timeout.

…and then Klay Thompson got hot.

…then missed a heat-check three, but Curry tapped the ball to Patrick McCaw, who reloaded to Klay at the top for a swish:

Boston kept things close with free throws by Marcus Smart and a heads-up put-back by Avery Bradley after Thompson had trouble securing the defensive rebound, but Steph came back, dissecting the Celtics’ defense for a reverse lefty:

Later, Curry used a Matt Barnes pick on Thomas to free up for a three…

…then after a block on Smart by James McAdoo, Steph went to the free throw line and gave Golden State a 70-63 cushion with 3:10 to play.

Thomas drew two straight trips to the line, then out of a timeout, the referees ruled that a previous three by Curry was actually a two, so the Warriors’ lead was down to 69-67, approaching two minutes.

Even fans were hitting shots:

Steph used an Andre Iguodala pick to go to the hole for a righty scoop, then after a dunk by Kelly Olynyk, Curry accepted the verbal challenge of rookie Jaylen Brown and hit an up-and-under three at the buzzer, giving the Warriors a 74-72 lead heading into the final frame:

Q4: Running Out Of Gas

The fourth quarter got off to an auspicious start as Shaun Livingston went up for a jumper but had to throw the ball away with a good close-out.

Out of a timeout, though, David West found Iguodala, who found a cutting Draymond Green for a dunk, then a couple possessions later, got another smash from Iguodala after Thomas missed a three.

But the Warriors defense got duped by a fake hand-off on a drive by Olynyk for an uncontested dunk, Curry came back in, then Jae Crowder hit a triple, and Kerr took a timeout with 6:08 to go, down 83-79.

After the timeout, Crowder struck again, hitting another trey at the shot clock buzzer, Iguodala made a poor pass that Avery Bradley easily stole for a run-out dunk, Steph dribbled too much up top and Olynyk trapped and stole the ball, leading to a Thomas layup, and Kerr called timeout again as the Celtics’ lead grew to 90-79 with 4:39 to play.

Curry missed a three, Thomas made his to give Boston a 14-point lead, but Green answered with a triple, giving the Warriors just six treys on 29 tries.

Thomas missed a trey, but Draymond committed a moving screen violation in transition. Jonas Jerebko missed, and running out of time, McCaw up-faked and drove left baseline for a two-hand jam, pulling the Warriors to 93-84 with 2:53 left.

On the next possession, the Celtics got two offensive rebounds in a row. Crowder missed a three, but a deflection by Smart went past McCaw and Boston got another chance.

Then Crowder missed another three, and this time Horford tracked the rebound down, fed Bradley, who dribbled and popped with Curry shadowing his shooting arm.

The jumper rattled in and there was the nail in the coffin.

To add insult to injury, Iguodala got the ball stolen by Thomas and, amazingly after the referees reveiewed the play, was not called for a clear path foul.

With 1:36 remaining and most of Oracle on the way out, with the surprisingly large minority of Celtics fans chanting, “MVP!”, Thomas drained the free throws to put 97-84 stranglehold on the game.

Kerr emptied the bench, subbing in James McAdoo for Green, Kevon Looney for Iguodala, Matt Barnes for Klay, and Ian Clark for Curry.

The Warriors will now head to Minnesota to face the Timberwolves in two nights, then head down to San Antonio for a back-to-back the night after that.