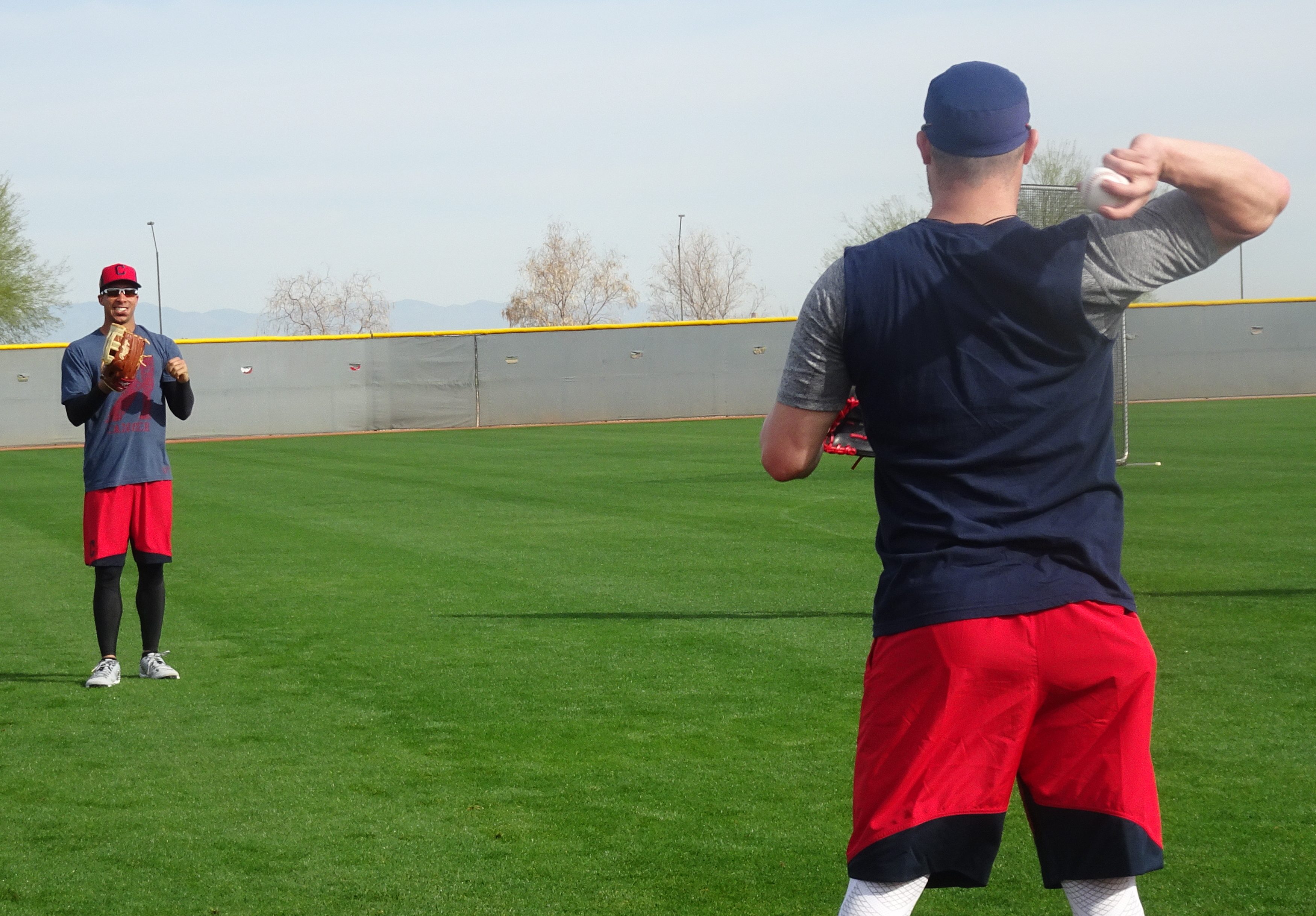 The Indians have yet to make any cuts (likely due to the spreading of players between the WBC and the upcoming road trip to San Antonio), but injuries have taken their toll on the expected opening day roster. Below is the updated version, particularly focusing on how Kipnis’ shoulder plays into the rest of the roster. Players who have been added since the last version are noted in green. Those removed are noted in red.

After his last start, Carrasco dealt with some pain in his right elbow and and an MRI revealed swelling without any structural damage. He is expected to miss at least one Spring start, but is still expected to break camp with the team. If he doesn’t, expect Salazar to move up in the rotation with either Merritt or Clevinger filling in the five spot.

There is little chance that Bauer will begin the year anywhere other than the Indians fourth starter, but injury scares could potentially move him up.

There has never really been a competition for fifth starter, but the limited players worthy of filling in for the fifth spot have decreased to two as Anderson’s elbow injury has been aggravated and he has been shut down for the time being. If the Indians need another starter now or in the future, Merritt and Clevinger would be the top choices with Plutko and Morimando being the next best options.

Armstrong started the Spring as the top in house option and his 6.1 scoreless innings with 6 strike outs so far this Spring have given no reason for this to change. With Logan and Miller already in the pen, chances are this last man will likely be a right hander with Nick Goody, Carlos Frias and Perci Garner being other good options.

Terry Francona has stated that Santana will be considered the starting first baseman with Encarnacion the DH. As will be the case with Gomes and Perez at catcher, the pair will likely end up splitting up playing time nearly equally.

On March 12th, Terry Francona announced that Kipnis would be shut down for two weeks and thus, most likely not be part of the Indians opening day roster. While no contingency plans have been named, the best possible option would be to move Ramirez from third to second, where he is strongest defensively, and use either Diaz or Urshela as the starting third baseman, however, it’s possible the Indians don’t want to move Ramirez away from third at all after he became so comfortable there during the 2016 season.

The Indians top second base prospects are essentially Mark Mathias, who separated his shoulder in a Spring game on 3/11 and will also miss the start of the season, and Tyler Krieger, who has impressed with team Israel in the World Baseball Classic. Krieger has not, however, played in AA yet and Mathias has just five games in Akron to this point. Both will likely play in Akron in 2017 and could be long term options, but not this season. Gonzalez and Martinez are options, but neither offer the offensive or defensive stability of the Diaz/Ramirez combination.

As mentioned in the Kipnis section, Ramirez’s fate could hinge on the health of others. He will certainly play every day and probably hit in the top half of the line-up, but because the Indians top options for a starting position player coming up from AAA are both natural third basemen, it would be easier for him to move than to find a direct replacement for nearly any injured player on the team.

In Urshela, the Indians have a player with most of a full season of Major League experience who has a great glove, no power and refuses to walk. In Diaz, the Indians have a true rookie (although he is slightly older than Urshela) who is a real offensive threat, hitting for power, average and walking nearly as much as he strikes out (in AA he walked more than he struck out). Diaz’s glove is questionable and he is currently being converted into an outfielder, so it’s also possible that should Brantley be the injured party that needs replacing, the Indians would just leave Ramirez at third and try Diaz in left.

While Kipnis’ injury has made Opening Day seem like a long shot, Brantley is preparing to play in games starting today. With Encarnacion and Santana at first base and DH, Brantley will have to play in left to stay in the lineup. If he isn’t available, Almonte is the most expected choice (with Naquin in center) while Jackson could be a reasonable option.

This selection is more of a “how it should be” than “how it will be” as Naquin will most likely start regularly in center. However, Almonte has proven to be the better defender and is a switch hitter who hits better against right handed pitching, making him an odd platoon made for the left handed Naquin. The only other real option here is Jackson although Zimmer has already made a strong case and may not be in AAA too long, ultimately taking over the starting role before the season ends.

A holding place for the many names in camp still who are obviously not going to make the roster, the only real competitors for this spot are Martinez, Gonzalez and Ronny Rodriguez. Ronny certainly seems the long shot based on his experience and play so far in Spring which means it’s really down to Gonzalez and Martinez. At the moment, Martinez has both the advantage in MLB experience (although it has shown him to be an extremely poor overall player) and Spring numbers. The only way both would make the team is if a player listed as a starter is injured to start the season. Should the Indians go with Martinez as a starter (an extremely frightening possibility), Robertson could be a possibility as they are currently working him out at second base.

OF2: Tyler Naquin (25)
Other Options: Chisenhall, Michael Martinez, Almonte, Zimmer, Greg Allen, or anyone else listed on this page who doesn’t make it somewhere else.

It would take an extreme set of circumstances for Naquin not to make the team out of camp and, as mentioned with Almonte, he will likely be the starting center fielder. If he doesn’t, Austin Jackson is the most likely replacement.

Anderson has been shut down for an unknown amount of time due to a mild UCL sprain. He was a long shot to make the roster before this, but is now out of contention for both the rotation and bullpen. If he doesn’t require surgery, he would still likely be one of the first men up in case of mid-season injury.