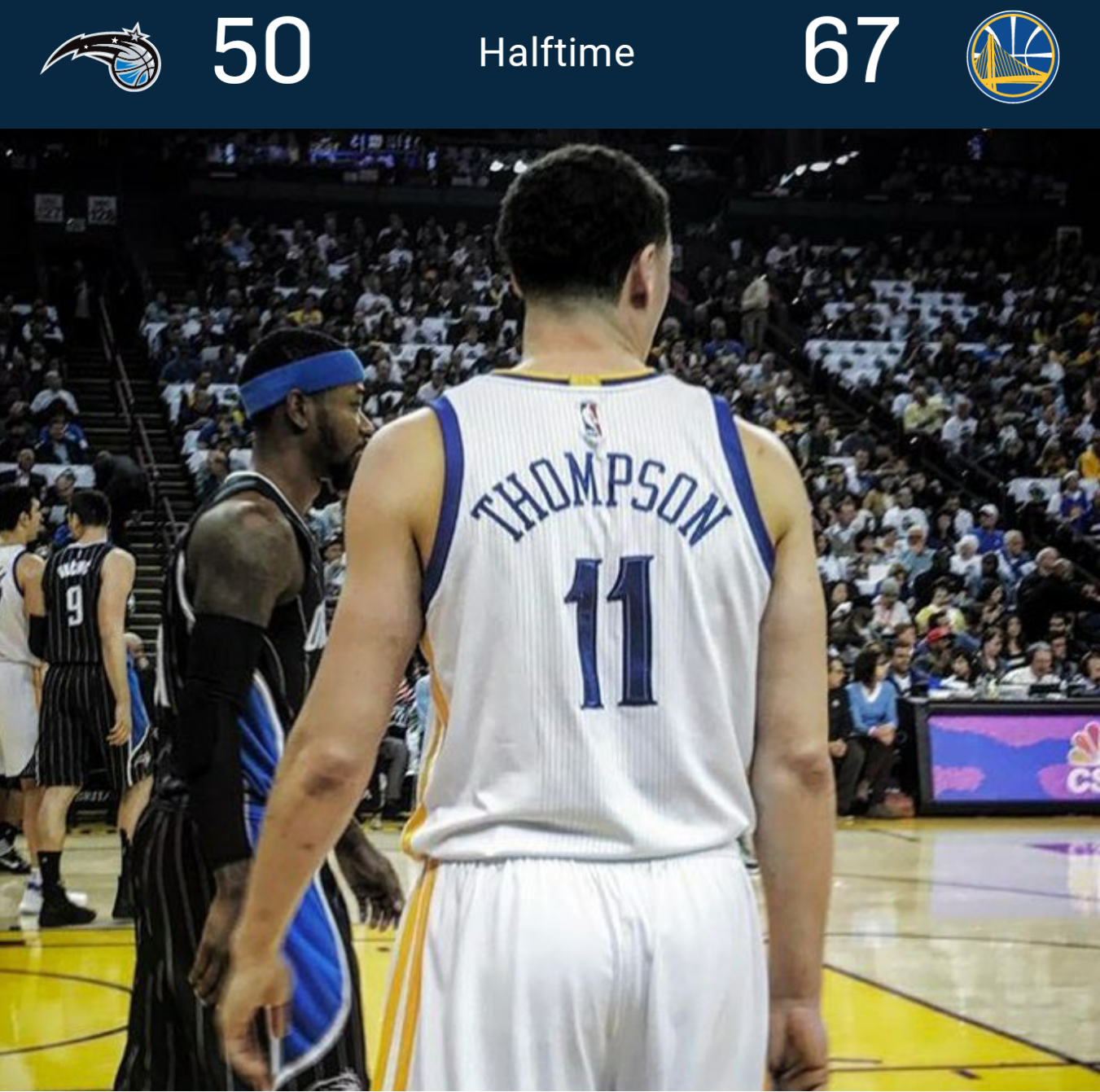 ORACLE ARENA, OAKLAND, CA — Two nights after coming back from behind to defeat the Sixers, the Golden State Warriors (53-14) were back at #Roaracle to face the Orlando Magic (24-44).

Golden State fans got a scare early on as Stephen Curry stepped on the heel of Evan Fournier and had to go to the locker room to get it checked:

Prior to that, Klay Thompson got off on the right foot with a three…

…then Zaza Pachulia got a dunk out of a cut to the hole and a “nutmeg” assist by Curry:

Orlando couldn’t get anything going on offense and the Warriors made them pay, and a left-to-right runner by Thompson gave them a 10-2 lead as Magic head coach Frank Vogel called timeout with 8:53 remaining.

Ian Clark came in for Curry and promptly hit a jumper, but Oracle gave applause as Steph came back to the bench (the ankle reported as a “tweak”), then Klay hit another jumper, and fed Pachulia for a bounce pass leading to a reverse layup with Andre Iguodala and Shaun Livingston enjoying themselves…

Curry took a turn feeding Zaza, then Steph found himself in the high post backup point guard D.J. Augustin, dribbled around, went by a pick from Draymond Green and found Thompson for another triple, from the right wing over Terrence Ross:

Vogel called another timeout as the Warriors’ lead grew to 21-6 with 5:55 to play.

Thompson made a bad pass, but came back with a catch-and-shoot swish, Ross lost the ball, Iguodala led the break and waited for a cutter. That turned out to be Curry down the left side for a scoop.

Klay added a left baseline catch-and-pivot fade-away delivered by Steph, Curry then knocked the ball out of a Bismack Biyombo post-up, and found Thompson once more from the right arc for another splash, pushing the lead to 31-10 with 3:24 to go as Vogel called yet another timeout:

But out of the timeout, Thompson missed two straight heat-checks, after a block by JaVale McGee.

Jeff Green came off the bench for Orlando and sparked them with a runner and a putback, Steph missed a step-back on Biyombo from the left hashmark at the buzzer, and the Warriors took a 34-20 lead into the second stanza.

Curry started the second quarter with a jumper, Draymond stopped a Biyombo dunk attempt, which led to a scoop by Steph on the break.

Later, after a missed open trey by Curry in transition led by Iguodala, Andre got a steal on C.J. Watson and capped it off with a run-out jam, prompting another timeout by Vogel as the Warriors stretched their lead out to 42-24 with 9:15 to go.

Out of the timeout, the Magic got called for having six players on the floor, then after a few possessions which included this dunk by Draymond…

…Fournier missed a three, Draymond got the board, and threw a low-trajectory alley oop to a leaping Iguodala, who caught the ball from his waist and slammed it home:

After a timeout by Warriors head coach Steve Kerr, David West hit a jumper then got fed by Klay for a dunk, and later Matt Barnes found Clark wide open at the top for three more.

Thompson added a long two assisted by Clark, then on the next possession, Barnes this time drained a triple from Clark, giving Golden State a comfortable 61-33 lead as Vogel took another timeout with 3:38 left.

Closing out the half, Klay hit a dribble-and-pop over Aaron Gordon, giving him 27 points…

…the Splash Brothers missed one more three each, Draymond made a runner, and Fournier hit a triple, leaving the game at 67-50 at halftime with Golden State up.