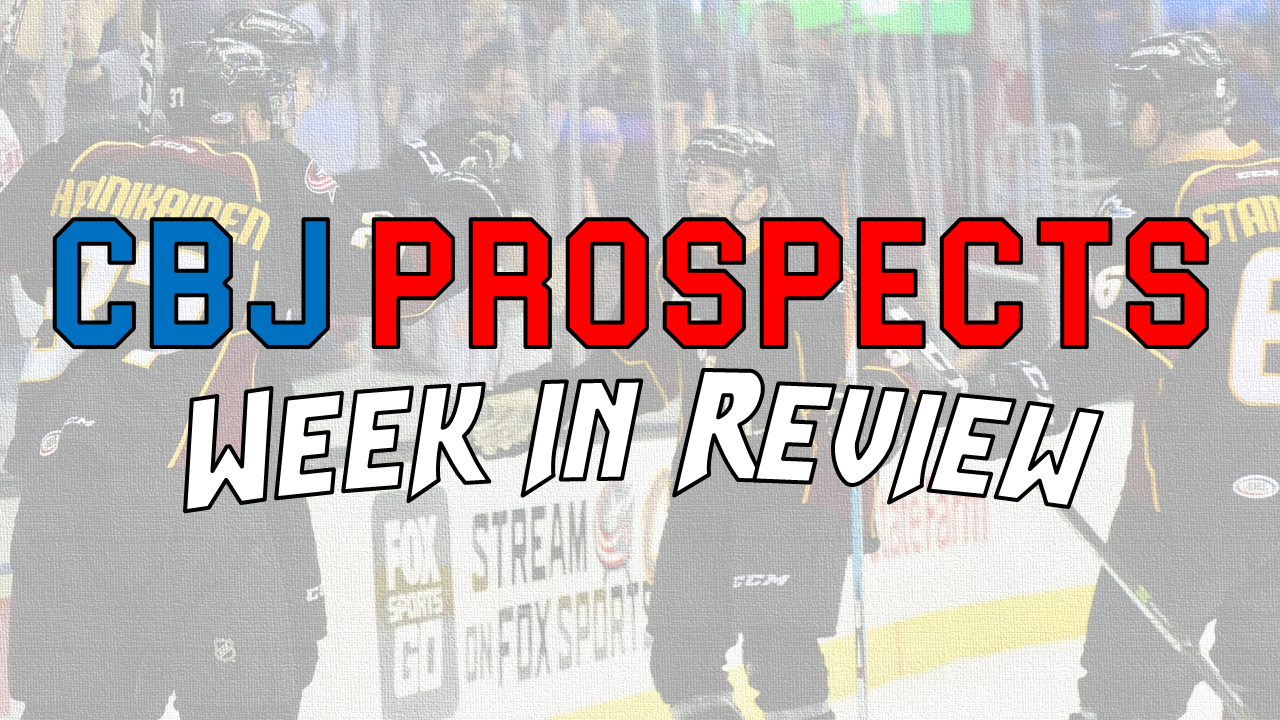 Well everyone, after last year’s Calder Cup run, the Monsters just missed out on a chance to try and repeat as champs when they missed another post-season berth by the narrow margin of regulation wins tiebreaker.

We’re looking back at the team’s last 10 games in this recap, so let’s get on to it.

We start off with a big series against division, and playoff spot, rival, Charlotte. In the first period, Ryan Craig opened the scoring when he took a pass from Dean Kukan in front and slid the puck past the Checkers goalie to make it 1-0. A few minutes later, the Checkers struck and then added another in the second before the Monsters tied it. Late in the second, with the Monsters on the power play, Kukan found Markus Hannikainen who skated around the Checkers defense and fired a backhand to tie it at two. The game went to OT and Zac Dalpe played the role of hero when he took a pass from Kukan down low and fired a shot for the winner. Anton Forsberg made 21 saves in the win.

The rematch didn’t go as well as the Monsters allowed the Checkers to take a 3-0 lead before getting on the board. 36 seconds after the third Checkers’ goal, Dalpe hammered home a pass from TJ Tynan that a Checkers player got a piece of, it but Zac was able to finish. The Checkers put the nail in the Monsters coffin, for this game at least, late in the third with another goal to make it a 4-1 final. Forsberg made 23 saves in the loss.

Quickly, after this game, the parade of Blue Jackets prospects heading to Cleveland began. Defenseman Gabriel Carlsson being the first to join the Monsters.

To start April, the Monsters took off on a five game Midwest road trip starting in Chicago. The AHL’s leading goal scorer, Wade Megan opened the scoring before a big moment for Sam Vigneault. Very late in the first with the Monsters on the power play, Alex Broadhurst fired a shot that Vigneault gathered, fired and then picked up his own rebound for his first career goal. In the second, it was all Monsters as Oleg Yevenko found Craig who fired a shot. Justin Scott picked up the rebound to make it 2-1. Just under two minutes later, Craig struck with a power play goal to make it 3-1. Early in the third, Dalpe kept his goal-scoring streak alive when he took a pass and skated into the circle before firing a shot to make it 4-1 Monsters. Carlsson picked up his first North American point with an assist on the goal. After giant Tage Thompson scored his first pro goal, the Monsters struck again. Hannikainen closed the scoring when he picked up the rebound of a Sonny Milano shot for Sonny’s third assist of the night. Forsberg made 28 saves in the win.

Another day, another new player. This time, New Albany’s own Kole Sherwood joined the Monsters and made his debut the next game against Iowa.

In the next game it was all Monsters, and Brad Thiessen in net for Cleveland. Late in the first, Dalpe made it 3 games in a row with a goal. Before the period was over, the Monsters struck again when, off a draw, John Ramage passed to Milano who found Tynan who got the score to make it 2-0 Monsters. After a scoreless second, late in the third, Justin Scott scored an empty net goal off the backhand from about the center redline. 13 seconds later, Nick Moutrey scored to make it 4-0. In the win, Theissen made 19 saves for his second shutout of the season.

In the rematch a few days later, the game was almost scoreless through two periods before the Wild scored with only eight seconds remaining in the middle frame. Midway through the third, Dalpe made it four games in a row with a goal when he tipped in a Kukan shot to tie it at one. The game went to OT with Iowa winning it 1:08 in. In the loss, Forsberg made 31 saves.

In the time between the Iowa game and the Monster’s next game, three players joined the Monsters while the team also lost one to the Jackets. The three additions were goalie Oscar Dansk, forward Vitaly Abramov and, in a bit of a shocker, giant defenseman Ryan Collins. Gabriel Carlsson was recalled to the CBJ.

In the team’s next game against Milwaukee, both Abramov and Collins would made their pro debuts. It was a low scoring affair that saw no goals in the first. In the second, Dalpe made it five games in a row with a goal when Craig chipped the puck across the crease with Dalpe putting it past the Ads goalie to make it 1-0. That’s the score that would last until the game’s end. In the win, Forsberg made 27 saves for his fourth shutout of the season.

Finishing up the road trip in Grand Rapids, it was another all Monsters game. Starting off in the first, the Monsters skated out of a board battle on a three on two with Kukan dropping to Hannikainen who found Joe Pendenza who made it 1-0. Early in the second, Snny Milano started what would be a big night for him. Hannikianen passed to Vigneault who wrangled the puck and threw it in front where Sonny scored to make it 2-0. Later in the second, after a Vigneault hit, Milano gathered the loose puck and found Hannikainen in front to make it 3-0 Monsters. Just over four minutes later, Sonny finished off his three point night with his second goal of the game. Thiessen made it back-to-back shutouts for Monsters goalies. In the win Brad made 31 saves.

Cleveland closed out the season with three at the Q, starting with a rematch with the Griffins. The visiting team opened the scoring with a pair of first period goals, including one at 41 seconds into the game. Late in the first, Abramov chased a Yevenko dump-in behind the net and found Broadhurst who scored to make it 2-1 Grand Rapids. In the second, Collins took a pass from Jamie Sifers and fired a shot that was tipped by Abramov to tie the game at two. The play marked Abramov and Collins’ first pro points. In the third, after Dean Kukan had earned 12 of his 19 penalty minutes on the night, Hannikainen chipped the puck away from a Grand Rapids player and Jordan Maletta gathered the puck and was off to the races. He scored a shorthanded goal to make it 3-2 Monsters. Sadly, with only 18 seconds remaining in the game, ex-Jackets farmhand Matthew Ford scored to tie the game at three. The game went to a shootout with the Monsters outscoring the Griffins 2-0 to clinch Cleveland the win. In the victory, Forsberg made 33 saves and added two more in the shootout.

Closing out the season with a pair against Manitoba, play started ugly as the Moose roared out to a 3-0 lead before the Monsters struck. In the second, Kukan sent a rink wide pass to Broadhurst who fired to make it 3-1 Moose. Just over two minutes later, Kukan got some help when he fired a shot from the goalline and it was tipped in by a Moose player to make it 3-2. Just over two minutes later, (this will become a theme) with the Monsters on the power play, Abramov found Tynan in front and he had an almost empty net to shoot into to tie it at three. Exactly two minutes later, (see?) the Monsters took their first lead of the game when recent offensive juggernaut (three points in last seven games) Oleg Yevenko found Sonny Milano who skated in, slammed on the brakes and found Joe Pendenza who fired a one timer to make it 4-3 Monsters. Late in the second, the Moose struck again before the Monsters found a way to win. Abramov started the play when he entered the zone and got hammered with Sam Vigneault gathering the puck and skating in before dropping a pass to Hannikainen. Hannikainen scored to clinch the Monsters a 5-4 come from behind victory. In the win Anton Forsberg would make 32 saves.

In the regular season finale, Manitoba scored the only goal in a 1-0 Moose victory in a fight filled affair. The game included Darren Kramer getting involved in a fight while Kramer was on the bench, the Moose’s coach also got tossed. In the loss, Forsberg stopped 29 of 30.

Luckily the team the Monsters were competing against for the final playoff spot also lost that night, meaning the Monsters were still alive for post-season consideration, but with Carolina earning a point against Chicago the next night, they got the final spot in the Central Division and the Monsters’ 2016-17 campaign ended.

As for next season, the Monsters appear to have a strong rookie class heading its way next year with Calvin Thurkauf and Keegan Kolesar atop the list of players set to join the team.

This ends our AHL coverage for the season. I’ll be back later with a CHL second round update as two prospects have already moved on to the Conference Finals. We’ll also keep you up to date on Kevin Stenlund in the SHL Finals and Peter Thome should he make it into a USHL playoff game.