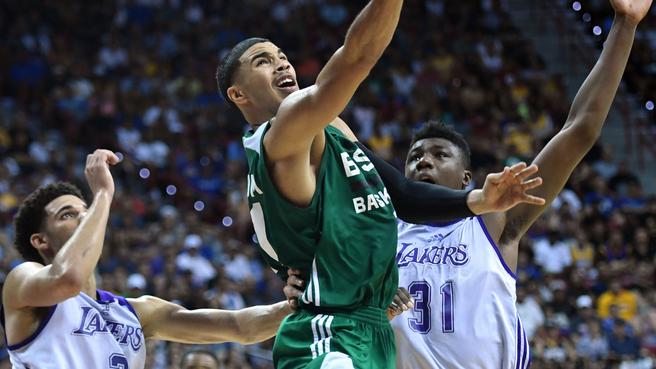 The Celtics’ summer league game against the Lakers on Saturday was sold-out on Friday afternoon, an extreme rarity. The game was billed as a battle between the No. 2 pick in this year’s draft, Lakers point guard Lonzo Ball, and the No. 3 choice, Celtics forward Jayson Tatum.

And, of course, it was Celtics vs. Lakers.

Ball wowed the Lakers-heavy crowd with his dazzling passes, but Tatum had the final say, tallying 27 points and 11 rebounds as the Celtics took an 86-81 win.

“Every player loves the big games,” Tatum said, “You try not to pay too much attention to it. You just try to focus on the team and winning. I love competing. But Lonzo’s a great player.”

This is my fourth Summer League and I’ve never seen anything like the crowd at yesterday’s Celtics-Lakers game. Part of the beauty of the Las Vegas league is the dual games going on in the Cox Pavilion and the Thomas & Mack Center. Generally, you can walk between the two games and catch all the action you want while sitting in a decent seat no matter what.

Not this time. Lakers fans made the four-hour drive to pack the building and get their first look at  Lonzo Ball, who impressed with elite court vision and passing skills. When he came out for warmups, that crowd stood, pointed, and lifted their phones. Every pass drew an “ooh” from the Laker faithful. And the Summer Celtics were booed as loudly as they’ll hear for a long time.

So suddenly, meaningless as the result was, this felt like a big game.

This is why Tatum’s finishing flourish was so impressive, and why it’s hard to keep the excitement over his potential in check. Tatum has largely outperformed the competition in Summer League. He’s got an NBA-ready offensive game that will allow him to generally get quality, make-able shots whenever he wants. Against the backdrop of boos in what suddenly became enemy territory, he dropped daggers from the post and from deep. He showed he could take lesser defenders and put them in his centrifuge to spin out a basket in the post. He has a step-back jump that he can rely on whenever he wants, drawing a rather impressive comparison.

Walter McCarty with a holy comparison for Jayson Tatum: "He reminds me of Paul Pierce."

But here is where we try to keep things in check with the “yeah but it’s still Summer League” caveat.

His shot does have a hitch in it that may need fixing before the shot falls as reliably as we’d like. The “lesser competition” is so much “lesser” that most of the guys he’s facing aren’t even good enough to make it into the NBA, which will be a far cry from the bench players he’ll be facing in the regular season. He needs to get stronger, and it’s easy to predict early on that even if he begins posting up in a good spot, he’ll get pushed out of his comfort zone very easily and that fadeaway jumper will go from “comfortable mid-range shot” to “long 2” very quickly.

As I’ve said time and time again, summer success is not an indicator of future success, but it sure as hell beats summer failure. A good player is supposed to put up big performances against mostly non-NBA players.

But we’ve seen some current non-NBA players put up big numbers too. The difference here is that Tatum isn’t really forcing his athletic will on teams. His success is coming from skill and shot creation instead of sheer speed and quickness.

This is all encouraging… but it’s also intoxicating. We have to be careful not to get drunk off the Las Vegas numbers because we’ll be fighting one hell of a hangover come December. Tatum has got the tools to be very good, but realizing his full potential will be a longer process than July indicates. It’s important that we all appreciate the possibilities without making too big of a leap.

Page 2: Al Horford is impressed with the Celtics moves

“I think we have a chance to be really good,” Horford said. “I think the key for us is to make sure that we keep working, that we keep getting better. The biggest thing is once we get together to really start working on the chemistry, really getting comfortable playing with each other.”

In addition to Hayward and Tatum, the Celtics added forward Marcus Morris in Friday’s trade that sent Avery Bradley to the Pistons. Boston is rapidly collecting tall, versatile players who are capable of drilling 3-pointers.

I apologize for doing this but… Here’s a Colin Cowherd take on the moves. You don’t have to listen to it, I’ll sum it up later… but I’m sharing it for contrast.

This begins with the faulty premise that Hayward’s 22 points arriving is less than Bradley and Olynyk’s 26 points leaving town. Marcus Morris is a person who scores baskets too… he had 14 points a game himself so in reality, 36 points is coming in while 26 is leaving.

But it’s also the types of players the Celtics have brought in. At one point in yesterday’s Summer League game I got a text from a scout who asked “who’s playing center for Boston right now?” The Celitcs had five guys from 6’7″-6’9″ on the floor and decided Semi Ojeleye was the guy strong enough to check LA’s bigs.

This is what the Celtics are ultimately building… a positionless brood of basketballers who will fly around the court exploiting mismatches. While the summer C’s weren’t effective offensively until a ball handler (Demetrius Jackson) checked in, the big boys will have Hayward and Horford in the mix to facilitate the action.

With those two, every post up should produce beehive-level activity behind it to spring open cutters for open shots. Someone, somewhere, will have an advantage to target. Offensively, Brad Stevens will have endless combinations at his disposal to perform his mad scientist experiments.

Back to Cowherd’s point, and Horford’s as well. Once the team does figure out its chemistry and full strengths, they’ll be able to do a lot of things they couldn’t before. Hayward alone becomes the most dynamic non-Isaiah Thomas scorer on the team, and the diversity in his offensive game will open things up for others on the floor. He’s obviously nowhere near the individual defender Bradley is, but he’s a much bigger offensive threat.

Who will handle the “lockdown” duties with Bradley gone? We’ll have to hope Smart’s up to the task of tracking Kyrie Irving all over the place or that the Celtics team defense can step up. That’s one question that’s still unanswered.

Still, Horford is right to be impressed, and these takes that the Celtics are somehow worse by adding an All Star player and a quality forward to replace Bradley and Olynyk are ridiculous.

This is what separates Ainge from people like Phil Jackson…

Explaining his decision Saturday night, Johnson said Ainge was open about his plans to chase bigger names in free agency. Realistically, the Celtics weren’t going to have any money to keep Johnson if they delivered, as they did, on their intentions of signing an All-Star like Gordon Hayward. Johnson knew all along he wasn’t Plan A in Boston.

“Pretty much the same Danny, you know. Just keeping it real with me,” Johnson explained. “Basically, he told me he was looking to get two big free agents. ‘If I get them, you’re not coming back. If I don’t, we’re going to call you back.’ So I just love the honesty he gave me. As soon as free agency hit he was the first person to text me good luck and, ‘I wish you the best.’ He’s just first class. Danny’s a good guy.”

Ainge has his critics… but having spent the past few years watching Ainge in contrast to Phil Jackson we can see what it takes to run a successful franchise. Guys appreciate the honesty that Ainge gives them. They’re not going to be left in the dark about things if they are on tenuous ground.

Some guys might not like it, but it’s better than Jackson’s media mind games trying to psych a player into bending to his whims.

Globe: Who are the winners and losers in NBA free agency so far? 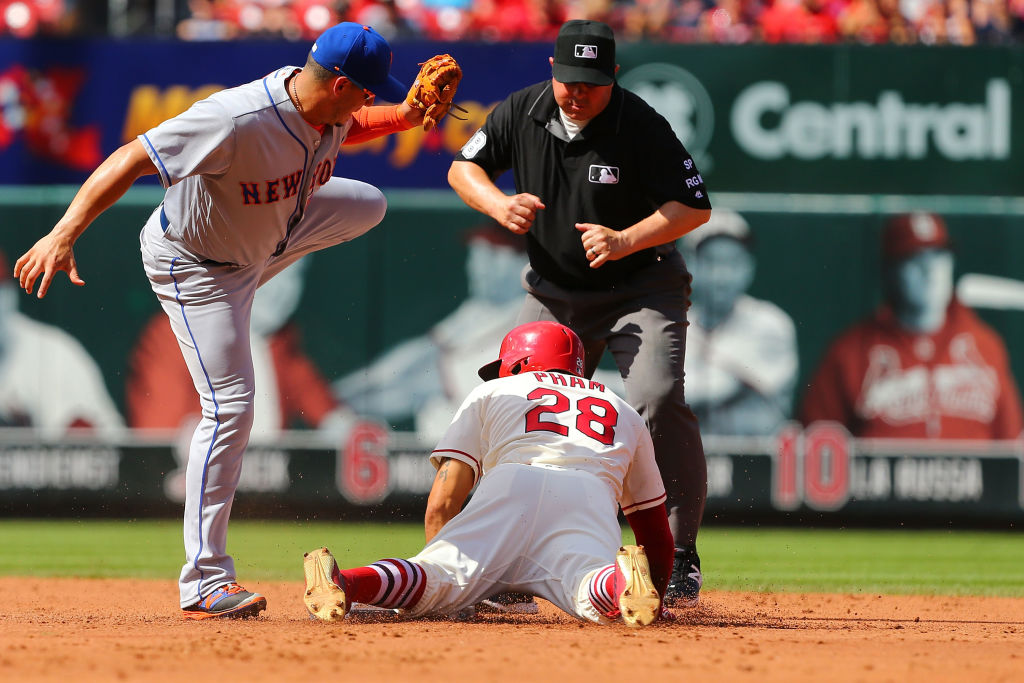