Raiders Roundtable: Weaknesses, Strengths, Questions and Expectations for Oakland in 2017 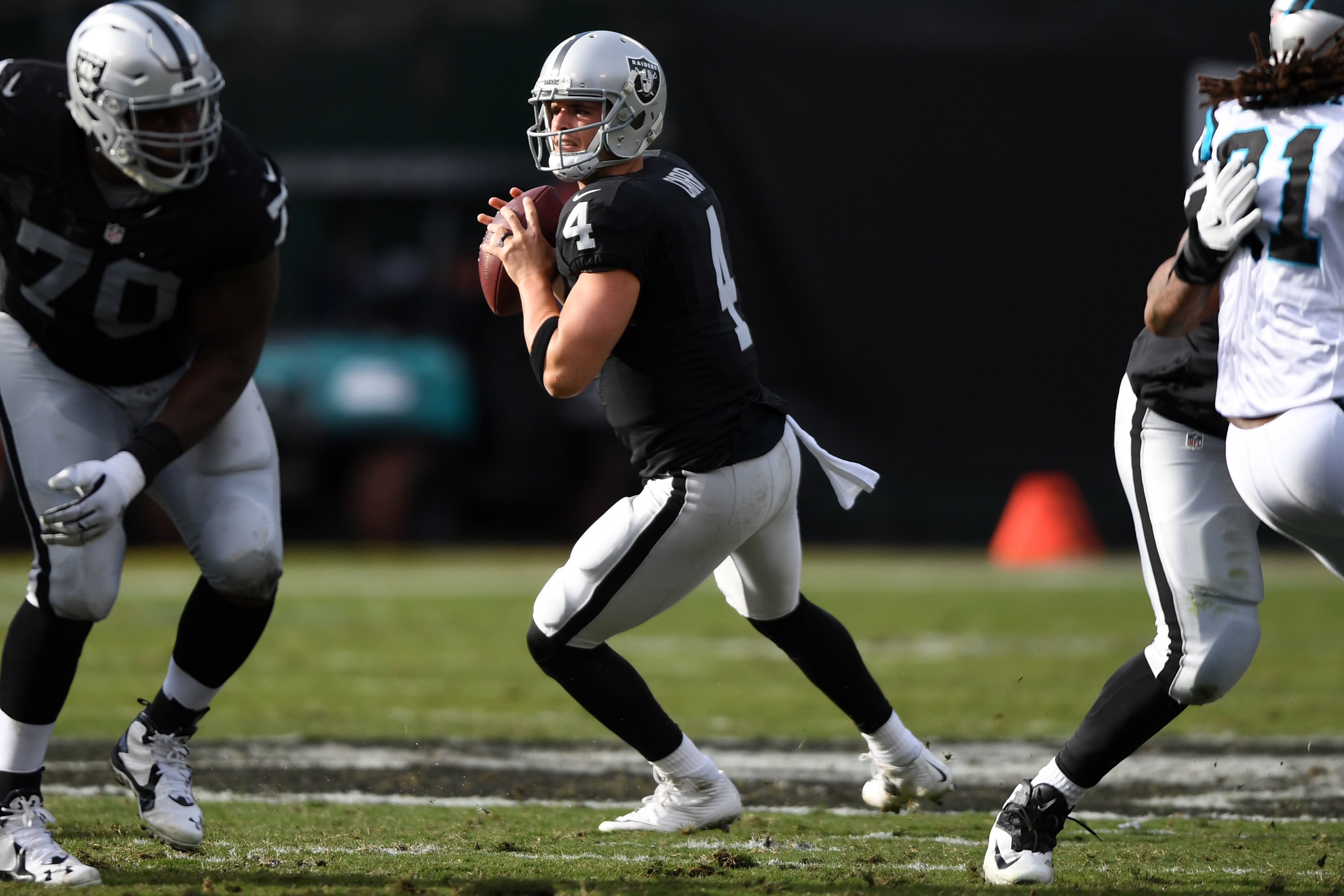 Raiders Roundtable: Weaknesses, Strengths, Questions and Expectations for Oakland in 2017

The Oakland Raiders have one of the strongest fanbases and blogospheres in the entire NFL. Find out what happens when you ask a bunch of Raiders experts a series of questions, via email, ahead of training camp. These writers and bloggers all share insights on the Raiders’ strengths, weaknesses, questions and expectations headed into the 2017 season.

What are the Raiders’ biggest weaknesses heading into the season?

Ray Aspuria: Interior pass rush and middle linebacker are glaring items for a team with Super Bowl aspirations. While it’s conceivable the Raiders mask the deficiency at inside linebacker by playing more nickel and dime formations, the lack of a pass rush from the defensive tackle positions remains a concern. Getting a consistent rush from Bruce Irvin and Khalil Mack on the outside coupled with someone attacking from the inside makes the entire defense better.

Maliik Obee: The biggest weaknesses for the Oakland Raiders are at the right tackle and linebacker positions… My early pick for starting right tackle is Vadal Alexander. In his rookie season, the 7th-rounder stepped up when needed, certainly possessing the intangibles to win the spot. As far as the linebackers, the uncertainty looming of whether or not veteran Perry Riley Jr. will resign is aggravating. Riley was the best linebacker in 2016 for a unit cluttered with raw talent like Cory James. On the flip, guys like Jelani Jenkins have proven to be usable when he is actually healthy. The biggest issue for the Raiders linebacker corp is putting out a group inept at coverage, a skill-set that the Raiders have lacked at the linebacker position for years.

Philip Robinson III: Middle linebacker is a problem for the Oakland Raiders. In this Seattle Seahawk copycat defense, the Raiders do not possess the level of athletes and players to the caliber of Bobby Wagner and K.J. Wright on the roster at this time. With a philosophical change from the 4-3 under, to a 3-4. With a simplification of responsibilities, the linebackers currently on the roster are better by the scheme. It remains to be seen if that is what happens, but as it currently stands the best three middle linebackers in my opinion without having seen the rookies, are probably Corey James, Jelani Jenkins and Marquel Lee…

James Arcellana: I don’t want to be captain obvious or anything but clearly it’s the defense. I know a lot of people will be more specific and point to the linebackers, but I think that’s getting a little ahead of ourselves. Let’s not forget that last year, there were a lot more problems on defense than just the linebackers. I know guys like Gareon Conley, Obi Melifonwu and Justin Vanderdoes along with a healthy Mario Edwards, Jr. are all supposed to make the defense better but until we see it, that’s just speculation. The Raiders need to improve on all aspects of defense and while I do believe they will until they actually show improvement, the defense as a whole remains the biggest weakness on this team.

Mario Tovar: Well considering the recent developments it can be said that cornerback and left tackle should be up for consideration. If Penn holds out then thankfully Kelechi Osemele can fill the spot but now the depth at offensive line is spread a little bit thinner which should always be concerning when you remember what happened late last season and in the playoffs when Penn was unavailable and then Hudson going down in the game. And yes, middle linebacker also worries me as we’re expected to believe that everything will be fine with a rookie holding down the middle. I’m disappointed Reggie McKenzie didn’t address this position more in free agency.

What are the Raiders’ biggest strengths?

Ray Aspuria: Offensive line, quarterback and wide receiver. The Raiders Nation of Domination O-line is an imposing unit and are certainly eager to keep gunslinging quarterback Derek Carr protected and upright. The offensive line sets the brutal tone on offense and the rest of the skill positions click in place. Carr is one of the games best young quarterbacks and he has a solid 1-2 combo to throw to in Michael Crabtree and Amari Cooper.

Maliik Obee: The biggest strengths for the Raiders are at the running back and wide receiver positions. Bringing in Marshawn Lynch makes the Raiders a team to watch for both fans and opposing personnel. Lynch has never had a line like this in front of him, and he has 3 solid backs behind him in Jalen Richard, DeAndre Washington and Jamize Olawale. Even rookie Elijah Hood can produce if necessary or just learn under BeastMode’s wing. The receiving corp features Pro Bowl stud Amari Cooper and Michael Crabtree, who is coming off his first 1000-yard season since 2012. In the slot, Seth Roberts provides a threat that is just as dangerous with the ball as he is blocking. That’s when he actually catches the ball. The Raiders have brought in former Vikings one-man-show Cordarrelle Patterson, who will double as an optional receiver for trick plays and variation as well on special teams. Deep in the depth chart lies Jayden Mickens, Johnny Holton, Ishmael Zamora and Keon Hatcher, who will all fight for a spot and a chance to show their skill.

James Arcellana: It all starts and ends with Derek Carr… When you have a special talent at quarterback, it changes everything. Everyone on your team is better because of a guy like Carr, who is not only a leader on the field but a leader off of it as well…

Mario Tovar: One word; offense. This offense has the potential to do something special this season and that’s an understatement at this point. And NFL MVP-caliber quarterback, a stable of running backs who each have individual talents, the best wide receiver duo in the NFL, and a nice group of tight ends…

What are your biggest questions headed into Oakland’s 2017 season?

Ray Aspuria: What happens if Carr goes down, again? This is the biggest question as the backup QB position is still a bit of a question mark. Connor Cook was neither sound nor atrocious when thrust under center considering he was a rookie who got virtually no snaps in practice before Carr went down. E.J. Manuel is not a better option as he’s shown whether he’s pressured or not, he can both under or overthrow a wide-open receiver.

Philip Robinson III: Can someone cover the tight end? Will the defense protect this house? How far can Carr rise?

James Arcellana: The biggest question for me is whether or not the defense can develop a pass rush. While there were clearly issues with the secondary and linebackers last season, if you ask me, a quality defense in today’s NFL starts with your pass rush. A great pass rush will make your secondary better while also limiting what the opposing offense can do. Despite having the Defensive Player of the Year in Khalil Mack and a seven sack player opposite him in Bruce Irvin, the Raiders were last in the league in sacks and that’s just plain unacceptable.

Mario Tovar: Will defensive coordinator Ken Norton Jr. make it thru the early part of the season? What’s going to happen if the defense struggles again, will he be replaced by Coach Pagano? Are we putting too many expectations on this team? I mean let’s not forget the Raiders haven’t had a playoff win since 2002. So maybe let’s take this one game at a time for now.

What are you most excited for in the coming Raiders season?

Ray Aspuria: An improved showing from the defense, namely the secondary. With ex-Charger defensive coordinator John Pagano serving as assistant head coach/defense, he’s main job is improving the communication in the secondary. He has a veteran in Reggie Nelson to lean on while he has a heat-seeking missile who is finally healthy in Karl Joseph. Pagano also has two veteran outside corners and young rookies Gareon Conley and Obi Melifonwu to mold.

Maliik Obee: I’m actually most excited to see the offensive line battles. The Raiders line allowed the least sacks in the NFL in 2016, but face issues at both left and right tackles. Pro Bowl tackle Donald Penn is the enforcer on the left end, but at 34, father time is sure to knock sooner than later. Penn has expressed his desire to take the young guys under the wing, namely rookie David Sharpe. Between Sharpe, Denver Kirkland and rookie Jylan Ware, it’ll be interesting to see who can serve as a formidable backup until Penn is off the books next summer. At right tackle, Ware, Vadal Alexander and Marshall Newhouse will look to knock off Austin Howard [Howard has since been cut] for his starting job. If the Raiders can bolster the already-solid offensive line, the sky is the limit offensively.

James Arcellana: For me, it’s Marshawn Lynch, but that’s a very personal answer. As someone who was raised in Oakland, I’ve been watching Marshawn Lynch play since he was in high school at Oakland Tech. And when Lynch went to Cal after high school, I was able to continue following him because I am a Cal Football season ticket holder. The other thing to remember is that Lynch does a lot for the Oakland community and as a member of that community, I’m very grateful. So for me, just having Lynch don the Silver and Black will be a special moment…

Mario Tovar: In all honesty, I want to see Derek Carr take the next step and become the NFL MVP which won’t be easy considering the schedule and also let’s win that Lombardi Trophy for the people of the Bay Area before the inevitable happens.

Check out each one of them for daily Raiders content and insights. Stay tuned for more West Coast NFL Roundtables on Left Coast Sports.