Your Morning Dump… Where we ask: Will there be a new Kyrie? 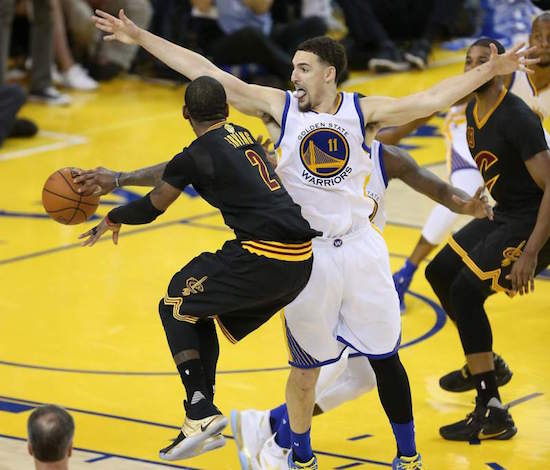 Will Irving adjust? Bear in mind that this player is so confident in his own abilities, he would rather leave James — and a better title shot — so he can play his game without criticism. Maybe Irving will adjust on his own, or maybe — perhaps even probably — Stevens’ ability to communicate his philosophy will get through. It’s an important factor because ball movement is central to Boston’s success. The Celtics were second in passes per game last season per NBA.com (the Cavs were 26th), though Irving averaged only three fewer passes than Thomas. The Celtics’ success was built on getting everyone involved. The Cavaliers’ success was built on the individual brilliance of James and Irving, and passing to shooters. The point guard in Stevens’ system bears way more responsibility.

If Irving buys in, look out.

CBSSports — After the big trade, how do Kyrie Irving and Isaiah Thomas fit Celtics, Cavaliers?

Now Kyrie essentially has the James role. He has the chance to show he is a benevolent leader who will talk with more sincerity about “the team.” And this is critical on a Celtics club that will need relative children like Brown and Jayson Tatum to make major contributions.

How well Irving builds confidence in others will be hard to define with analytics, but it will rank in import with his points and assists.

Kyrie Irving got what he wanted. He’s free to roam the hardwood without the greatest player in the game on his side. He wasn’t banished to an unfinished roster, like Phoenix or Sacramento, or an unstable situation like New Orleans or New York.

While the Boston Celtics are different on the surface than they were last season (Marcus Smart is the most tenured Celtics player. Let that one sink in), they are fundamentally the same as they’ve been, really, since 2007. A well-run organization willing to spend the necessary money on coaches and players to build a winner with a General Manager who knows what it takes to build a winning roster. They’re also coming off three straight trips to the playoffs far ahead of schedule. Kyrie Irving got what he wanted.

But with that comes an expectation that Kyrie will evolve and thus prove he was ready to step out of Lebron James’ shadow to become a Franchise Guy. He’s going to have to bend here. He can’t be the Kyrie who is a -609 without Lebron James for his career (granted this should be the best team he’s played on without Lebron). As Matt Moore explains in his breakdown above, Kyrie had nearly double the number of isolation plays than Isaiah Thomas last year, and that says a lot about how Brad Stevens wants to run his offense.

While Stevens might adjust somewhat to let Irving play to his strengths (is there a better Iso guy in the game?) he won’t do it at the expense of team success. For Irving, coming out of James’ shadow and being a franchise player means sacrificing for the betterment of the team. Paul Pierce did it once he had the horses around him. Hopefully Kyrie will do the same.

If he does, I think there’s a better chance that all of the leadership/confidence stuff follows. Irving is mercurial, sometimes a bit petulant, and thus it’s fair to ask if he really can lead, as well as fit in with the Celtics existing culture (yes there are only four guys left, but Horford and Smart really get it, and Hayward has played with Stevens before and is coming from a great system in Utah). My guess, and hope, is that the situation in Cleveland engendered some of Kyrie’s moodiness over the past few years. A fresh start with a great coach, loads of proven talent/young potential, and a basketball city should bring about an Irving ready to both buy-in and lead. Maybe it’ll even bring some more sustained defense, who knows?

Last point, when Irving first “demanded” a trade from Cleveland, everyone looked at +/- numbers, his high-volume scoring and his desire to leave the best player in basketball as signs that Irving could become the next Stephon Marbury. Marbury wanted out of ‘Sota, away from Kevin Garnett, to lead his own team. His prize? New Jersey. In the nearly three seasons Marbury played for the Nets, the team had three different coaches and had a combined winning percentage under .400. Steph put up empty stats on a moribund team and was never the same.

Kyrie Irving, first of all, is not Stephon Marbury (although if he came out with a $15 shoe, sneakerheads would be excited), and this Celtics team is the farthest thing away from those awful New Jersey squads.

Kyrie’s floor in this situation is not Marbury, and his ceiling, if he buys-in strategically and culturally, well, who knows how high that goes.

Both he and Irving left Duke after just one season – Irving in 2011, Tatum in June of this year. In addition, the two are also represented by the same agent.

It doesn’t end there.

Both were in the Bahamas vacationing together this summer, although Tatum said the two had no idea at the time that they would soon become teammates.

Tatum acknowledged that the two are close, and credits Irving for jump-starting the run of Duke players who left after just one season which includes himself, Harry Giles (first round, 20th overall) and Frank Jackson (second round, 31st overall) this year, as well as top 10 picks Austin Rivers (2012), Jabari Parker (2014), Jahlil Okafor (2015) and Brandon Ingram (2016)

“He definitely started that wave of one-and-done guys at Duke,” Tatum said.

Spending time with Irving and talking with him, that’s one thing.

“I’m pretty sure it’ll be a lot of fun,” Tatum said. “He’s a tremendous player, a superstar in this league.”

CSNNE — Tatum on Duke reunion with Irving: ‘Just as surprised as everyone else’

If all goes according to Danny Ainge’s plan, these two guys, Irving and Tatum should be playing a lot of years together. There’s a real Butler/Duke vibe to this team now. I wonder how many times Tatum/Irving will ask Hayward to try and re-create that half-court heave in practice this year?

And finally, our condolences to Jae Crowder

There were a few reports that Jae Crowder’s mother passed away last night. Crowder had asked on twitter two weeks ago for folks to pray for his family. Our condolences here at Red’s Army, and it isn’t lost on anyone how much more difficult it must be to process when he just found out he’ll be moving employers and cities unexpectedly.