Bob Miller to Serve as 'Team Ambassador' for LA Kings 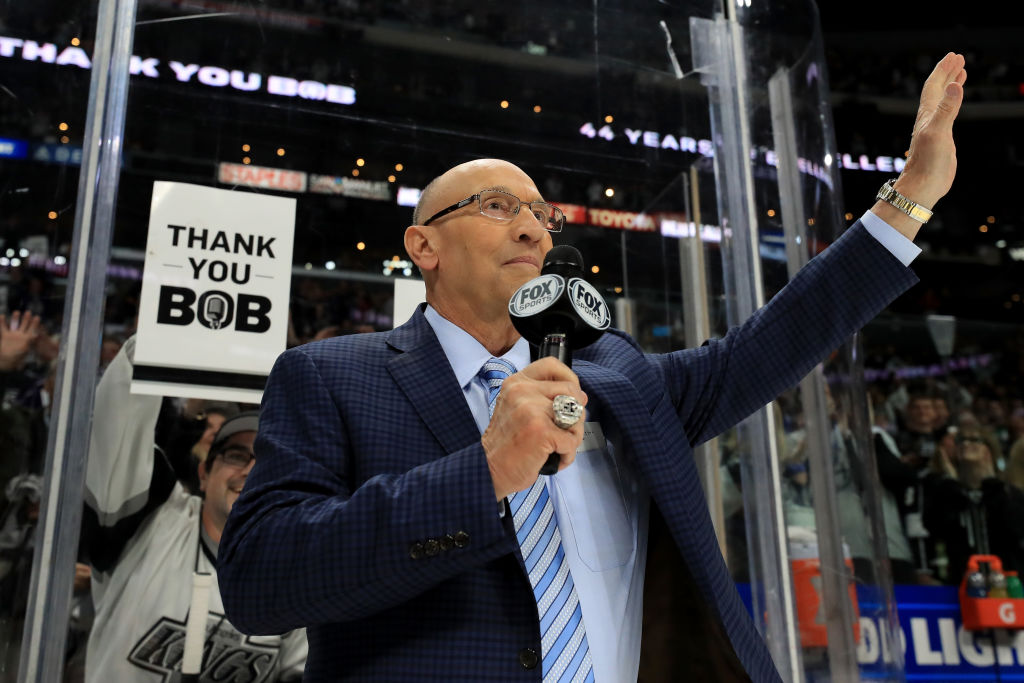 Bob Miller to Serve as 'Team Ambassador' for LA Kings

Los Angeles Kings and Hockey Hall of Fame Television Play-by-Play Broadcaster Bob Miller, who retired this past April, has officially been named a Kings Team Ambassador, the team announced earlier this week.

Miller will continue to contribute to the Kings on a part-time basis, making a number of appearances and being involved in additional special projects, including serving as the MC for the club’s Legends Night series.

“I am honored and truly delighted to be named an Ambassador for the Kings,” said Miller. “This will allow me to continue the association I have built with Kings management, players and fans over the past 44 years.”

Miller retired in March 2017 after 44 years as “Voice of the Kings.” He worked the first 17 years simulcast on TV and radio and the last 27 years as the exclusive television voice of the team joined by former Kings right wing Jim Fox for Kings games on FOX Sports West. Overall Miller called 3,353 Kings games including his final two telecasts on April 8 at STAPLES Center and April 9 in Anaheim.

On November 13, 2000, Miller received the Foster Hewitt Award, as selected by the NHL Professional Broadcasters’ Association. This award, which recognizes those members of the radio and television industry who have made outstanding contributions to their profession and the game during their hockey broadcasting careers, is recognized by a plaque in the Hockey Hall of Fame in Toronto.

On October 2, 2006, Miller received a star on the famous Hollywood Boulevard Walk of Fame. On February 4, 2002, Miller was inducted into the Southern California Sports Broadcasters Hall of Fame, where he served as that organization’s President for five years.

Miller has also been named the top Television Play-by-Play Announcer in Southern California 10 times (including 2015), and in 2014 he earned that club’s Special Achievement Award. In 2011, Miller was inducted into the California Sports Hall of Fame and in 2017 the Television Academy selected Miller as the recipient of the Governor’s Award.

In 1998, to commemorate his 25 years of loyal service to the organization, Miller was honored by having the STAPLES Center press box named after him and was presented with a “lifetime contract” by the club, and in 1997, Miller was named as one of the six inaugural members of the Kings Hall of Fame during the organization’s 30th Anniversary celebration. The National Sportscasters and Sportswriters Association also named him the California Sportscaster of the Year in 1997 and 2002.

A native of Chicago, Miller received his degree at the University of Iowa where he started his broadcasting career doing Hawkeye football and basketball games. Before joining the Kings, he worked professionally in radio and TV in Milwaukee and Madison, Wisconsin, and was the voice of University of Wisconsin hockey, football and basketball. In 1992, Miller received the honor of being inducted into Wisconsin’s Hockey Hall of Fame.

Along with his duties for the Kings, Miller’s voice has accented numerous TV and film projects, including “Cheers,” “Rollerball,” “Miracle on Ice,” “The Mighty Ducks” and “The Mighty Ducks 2.”

A resident of West Hills, he and his wife Judy have a married daughter, Kristin, a son Kevin, and they have two grandsons, Kaden and Brennon.