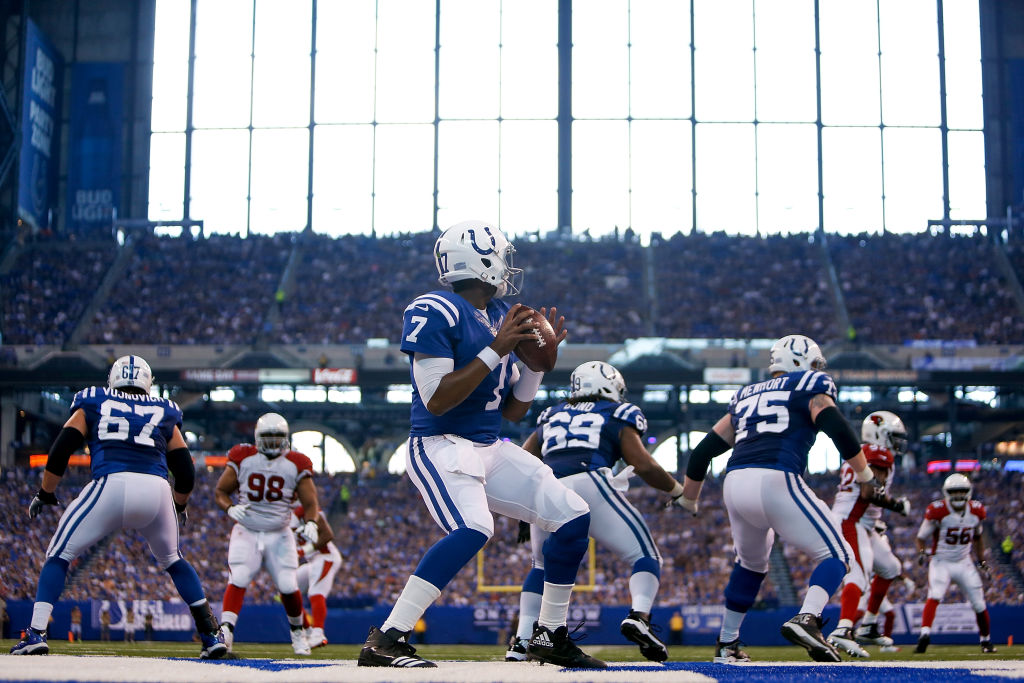 If Chuck Pagano didn’t want to start 0-2 for the fourth straight season during his tenure as the head coach of the Colts he couldn’t have asked for a better start from his team. Fast starts are something Colts fans aren’t used to under Pagano but today was a different story.

Arizona won the toss and decided to receive. The Cardinals went three and out after some great pressure that the Colts didn’t show last week. The Colts started newly acquired Jacoby Brissett after an awful performance by Scott Tolzien last weekend in LA.

Brissett drove the Colts all the way to the 11 yard line on the first drive before the offense would stall settling for an Adam Vinatieri field goal. After a leverage penalty on the Cardinals the Colts would hand off to Frank Gore for a touchdown and a 7-0 lead. After a second possession for the Cardinals they had zero total yards of offense.

The offense had good field position again after a great start by the defense. Brissett was able to convert another third-down after the Colts were 0-10 on third-down just a week ago. The possession ended in a 46-yard field goal from Vinatieri to take a 10-0 lead towards the end of the first quarter.

This is when the defense took the old mantra of bend but don’t break. Last week against the Rams the Colts had trouble on first down against the pass. After two possessions of running early Bruce Arians finally decided to pass early and this is where it started to work out. The first play of their third possession was a 46 yard pass play giving them 46 more yards of offense than they had through their first two possessions. Arizona gave themselves great position to put points on the board after getting a first down on the eight yard line. After two great plays by the Colts defense the Cardinals were on the 16 on third down. After a 15 yard pass play Arians decided to go for it on fourth down at the one with a fade play to Larry Fitzgerald and came away with zero points.

This is when Jacoby Brissett’s wide receivers decided they wouldn’t help him out anymore the rest of the day. Backed up in their end zone Brissett threw a third-down pass to T.Y. Hilton that should’ve given them a first down but Hilton stumbled after the catch. Pagano challenged the play for some reason and lost. So the Colts punted from their own end zone.

While the Colts wide receivers decided they would stop catching the football this is where the Cardinals would decide to play a little bit of offense. They went 54 yards on 15 plays and kicked a 27 yard field goal to make it a one possession game. The next Colts’ possession Kamar Aiken would drop a tough but catchable pass on third down.

The Cardinals offense kept clicking after the last drive and drove just outside of the red zone with ease. After a first down by Fitzgerald, Carson Palmer threw a deep pass near the end zone that was picked off by Malik Hooker who made his first career interception in his first career start.

Indianapolis was in prime position to at least get a field goal before Brissett threw the ball to Robert Turbin for nine yards that was brought back for offensive holding on Anthony Castonzo. The conservative Pagano decided the half was over then.

After a couple of punts by each team the Colts offense finally woke back up halfway through the third quarter. The Colts drove all the way to the seven yard line before losing some yards and having to settle for a 29-yard field goal by Vinatieri. The Colts took a two possession lead into the fourth quarter and things were great.

Things continued to be great for the Colts after a first down for the Cardinals they sacked Palmer on first down. Then a four yard loss to force a third-and-20 the Colts defense was in great shape to potentially put this game away. Then Palmer completed a pass to Jaron Brown for a first down and the referees helped the struggling Cardinals offense by calling a very weak roughing the passer penalty to set Arizona up on Indianpolis’ side of the field. Palmer threw a 45-yard touchdown pass to J.J. Nelson on the very next play.

Another three and out by the Colts gave the Cardinals prime position to take the lead for the first time today. While the Cardinals drove the football just outside of the red zone they had to settle for a 40-yard field goal to tie the game.

A big completion to Hilton was for nothing after the Colts weren’t able to gain more than two yards and forced to punt. Another stop by the Colts defense forced the Cardinals to punt again with a little over a minute. The Colts decided to throw the ball on third down and 10 inside the 15 with less than 40 seconds to go in the game.

That gave the Cardinals a chance to win the game in regulation. The Cardinals basically kneeled twice to give themselves an opportunity to kick a game-winning field goal with no time left. Phil Dawson missed a 42 yard kick to force overtime.

The Colts won the toss and Vinatieri chose to receive the kick like everyone else would. On the first offensive play of overtime Brissett made his first major mistake of the game throwing an interception to Tyrann Mathieu. That’s pretty much all you need to know. Dawson made the game-winning field from 30 yards. He still wishes he was half the man Adam Vinatieri has been throughout his career.