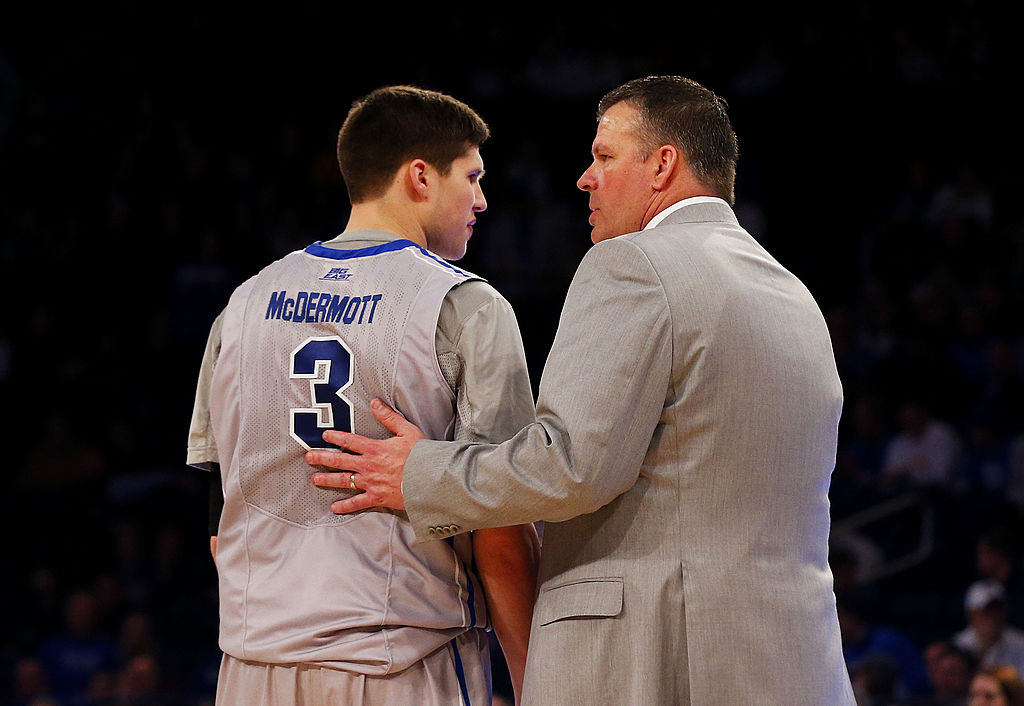 In the aftermath of the Carmelo Anthony trade, the Knicks can start fresh. While many eyes will be on returning rising stars like Kristaps Porzingis and Willy Hernangomez, there is plenty of young talent to be explored on this roster.

Looking across New York’s roster, there’s a glut of big men and not as many clear-cut small forwards. Whereas Tim Hardaway Jr. and Courtney Lee could play together at the 2 and 3 positions, that would require rolling out a smaller and much less dynamic lineup. Thus, herein lies a very favorable window of opportunity for new acquisition Doug McDermott.

Before getting traded to the Thunder last season, McDermott was averaging double-figures for the Bulls in a semi-controlled role. Playing in New York and taking advantage of meaningful minutes could allow him to let loose, especially as the Knicks look to replicate the offensive production vacated by Anthony’s departure.

“Offensively, Doug can score in a lot of different ways. When the opportunity has presented itself, you look at when Jimmy Butler missed double-digit games in Chicago, Doug was on the floor more,” Doug’s father and college coach at Creighton University, Greg McDermott, told KnicksJournal.com. “He was used more as part of the offense and was really efficient and effective. I think he can do that consistently. He’s really excited to play for Jeff Hornacek and the Knicks.”

Still just 25 years old, the younger McDermott is a lights out shooter, which could bode well for New York as they look to push the pace and spread the floor more this season.

“The way Coach Hornacek’s Phoenix Suns teams played made them one of the fastest teams in the league at the time. That’s how we play here at Creighton and that’s what Doug is accustomed to. That’s where he’s most effective,” the college coach explained. “The more he moves, the better he plays. The spacing component is a huge part of today’s NBA. Doug’s proven to be more effective when he’s on the move.”

In reshaping this roster around Kristaps Porzingis and reeling in new acquisitions like Enes Kanter and Michael Beasley, there appears to be an early recurring theme. The front office is building this team around hungry players and efficient point-per-minute producers. McDermott fits rights in. Still, if he’s going to be responsible for more substantial minutes, the sharpshooter must pull his weight on the defensive end as well.

“The way we want to play [offensively] starts with stops. You can’t really get up and down the floor if the ball’s going through the basket every time,” the forward acknowledged during Knicks’ media day. “That’s something I’ve been working on, trying to become a better team defender and help me get more time on the floor.”

His father conveyed that such an awareness has been a big focus, not only over his course, but most recently this offseason.

“There’s been a significant improvement in his defense over his career. He spent a ton of time working on it this summer. Sometimes in the NBA, the team defense is a big part of it. Doug needs to get better in one-on-one situations, and increase his awareness in team defense,” Coach McDermott said. “He spends a lot of time watching film and is working to improve.”

The three-year NBA vet has been a part of many winning atmospheres on all levels of basketball. This next phase of his career gives him an opportunity to grow with a great group of guys and lay a foundation, Coach McDermott added. Moreover, his son will have the coveted chance to prove himself and shine under the brights lights of the Big Apple. Ample opportunity is coming his way, and the young gun is ready.

“Doug embraces that. He wants to play a more significant role and this is an opportunity for him to do that. He’s ready to prove himself. He was one of the best college players to ever play the game, so there isn’t much that he’s going to be afraid of.”

As for how he’ll handle the pressures of playing in New York (especially as he hopes to take on a more prominent role), Coach McDermott noted that being the coach’s kid puts one under a microscope. It’s safe to say that based on past experience, his son knows how to lock in.

“Doug’s always had a mental toughness and focus to his game that is unlike anyone I’ve ever coached. It’s something he’s carried with him to the NBA,” he said.

That should suit McDermott well as he dons orange and blue.