10 thoughts from the Blues-Penguins opener 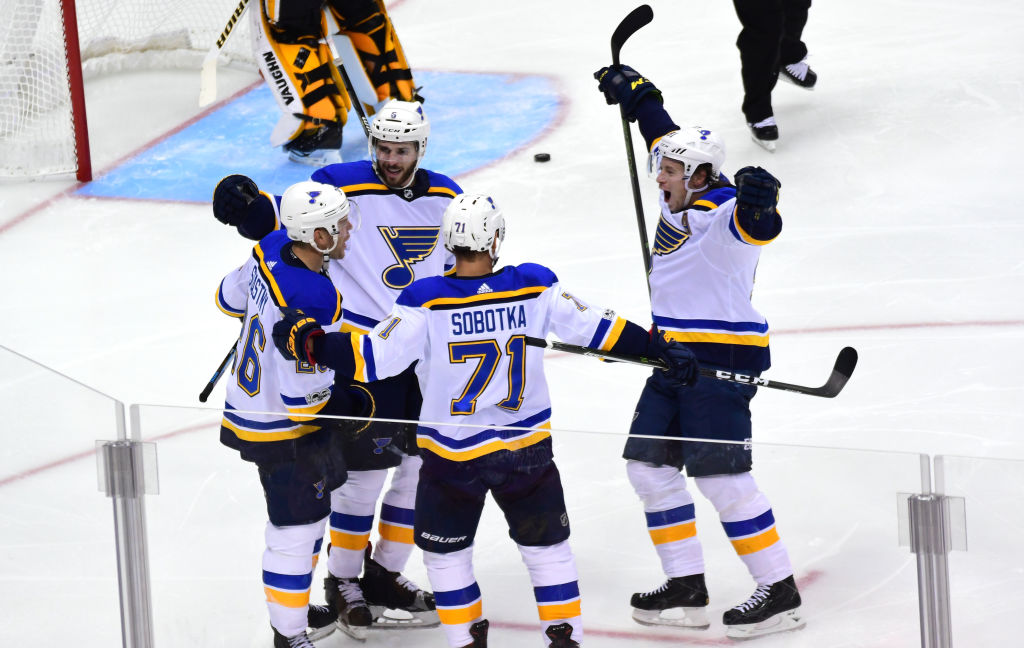 10 thoughts from the Blues-Penguins opener

The St. Louis Blues finally returned to action after a very long summer, visiting the Pittsburgh Penguins on the same night the defending champs hoisted their banner to the rafters of the PPG Paints Arena.

If you follow @FrozenNotes on Twitter, you probably heard many of my thoughts from the opener, but here are 10 more from the wild OT victory.

The reaction from the captain. #stlblues pic.twitter.com/b9oeSGe6Ih

This is the ceremony that never ends …

How long was that ceremony celebrating the Penguins’ Stanley Cup win last year? The answer is too long. Way, way too long. The Blues stayed in their dressing room for the bulk of it, but eventually skated out while the banner was going up much to the annoyance of Penguins fans who felt they were interrupting.

Well, don’t make the ceremony last 20 minutes if you don’t want the opposing team to get tired of waiting around!

The game finally started close to 7:30pm CST despite a scheduled start time of 7pm.

We all knew Schenn was a great addition for the Blues, mainly because he was replacing a dude who could barely do anything despite skating with one of the best players in the NHL.

In his Blues debut, Schenn made an immediate impact, scoring a goal while creating several other offensive chances. He looked more threatening in one game against the defending champs than Jori Lehtera looked all of last year.

Honestly, what was he thinking?

That’s one of the most obvious “closing hand on the puck” penalties you’ll ever see, and it resulted in a 5-on-3 and a goal for the Penguins. That diminished what should have been an outstanding debut.

That bizarre mistake aside, Schenn had a good game and should be fun to watch this year.

I can’t resist highlighting he was a healthy scratch for the Philadelphia Flyers in their opener.

NHL officiating has always been puzzling. I guess it’s nice that some things never change.

The officials put their whistles away for an extended stretch in the opener, then suddenly decided to call the game tight. The Blues did benefit from one of those calls (a tap on the hands which was called a slash), but the overall confusion isn’t good for any player or fan.

Call things consistently. It really shouldn’t be this difficult. If you’re going to call the game tight, do it in a manner so players can adjust to what is and what isn’t a penalty.

How did rookies Tage Thompson and Vince Dunn do in their debut? Neither of them grabbed the puck and chucked it down the ice, so things must have gone pretty well.

More seriously, it’s tough to assess either player in such a limited sample. Neither player had a shot. Thompson was on the ice for 11:26 while Dunn was out for 15:28. Dunn factored into more plays as a defenseman, but I’m still refraining on reading too far into anything.  It will clearly take some time for both players to get up to speed.

What a night for Alex Pietrangelo. Even with NBCSN butchering his name at every possible opportunity, Pietrangelo was dominant. He played his usual strong defense, and he also chipped in two goals of his own, including the winner in overtime. He also had eight of the team’s 34 shots.

Petro's on pace for 82. #stlblues pic.twitter.com/hYip42v4TA

Can’t ask for much better from the captain.

Teams appear to still be a bit hesitant in the circle now that officials are following the book and calling penalties on the second faceoff violation.

That being said, the Blues clearly need to work on their draws. They only won 41% of the faceoffs against the Penguins. That can be written off due to it being the first game of the year against a good team on the road, but it is an area the team can immediately work on.

What’s with the hashtag?

The Blues have a new hashtag for the season that will pop up the team’s logo when you use it on Twitter.

Now everyone (even @LouieSTLBlues) can add the Blue Note to tweets. Simply tweet with one hashtag:#AllTogetherNowSTL pic.twitter.com/EzDz1MFw2e

Why is it so long? Instead of sticking with something tried and true such as #stlblues or something which is instantly recognizable, they went with their slogan for the 2017-18 season with STL thrown on the end. Seems like a shortsighted attempt to build a one-year slogan when there was an opportunity to build the larger brand.

When every character counts, no one has the time or space to type that thing out.

Sobotka, with a ton of patience, sets up Stastny. He beats Murray. 4-2 #stlblues pic.twitter.com/HsBziNPISK

So far, so good. Stastny scored one huge goal to give the Blues what should have been a relatively safe 4-2 lead. He also assisted on Pietrangelo’s first goal.

It’s easy to count down the days to hockey all summer long. Then, the calendar flips to October and all of a sudden the Blues are playing a game that actually matters. It’s shocking in all of the right ways.

Welcome back, hockey. We’ve all missed you.