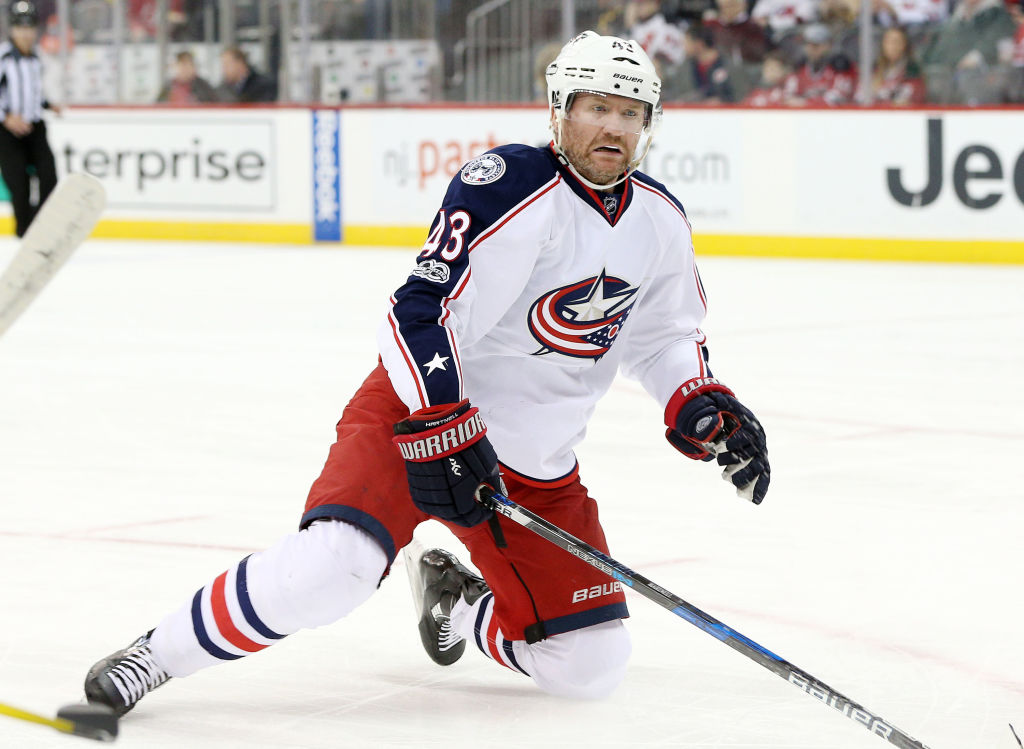 After a too short playoff run and a summer of some consequence, the quest for clarity finally begins in earnest on Friday at Nationwide Arena. The question hanging over the ice and over the franchise: how do the Columbus Blue Jackets follow up the best season in team history? Getting to 50 wins was no small task, necessitating both luck and timing. Neither was guaranteed last time, and neither should be expected with certainty this time.

As happens for every team, the Blue Jackets have changed over the offseason. In particular, the forward lines have been retooled, highlighted by the Artemi Panarin trade (and corresponding loss of Brandon Saad).

But something that hasn’t drawn as much digital ink is an under-the-radar aspect of the forward turnover: the buyout of winger Scott Hartnell. As noted by Sam over at 1st Ohio Battery, money was king in the decision. Hartnell’s cap hit just wasn’t cutting it for a team with an influx of youth and big financial choices on the horizon.

Unfortunately for the Jackets, with Hartnell in Nashville, Columbus’ forward depth takes a hit. This isn’t as big as, say, losing a first liner (Hartnell finished with just over 12 minutes per game). However, there is still something to be said for maintaining excellence across all four forward lines, particularly for a team without a Crosby, Matthews, or McDavid. And in several respects, Hartnell’s 2016-17 campaign was excellent.

What the Jackets Lose Without Hartnell

On the surface, losing the 9th best point scoring player on a team doesn’t sound like a huge deal. And given the context of the player, that kind of dismissive evaluation likely holds true from a top 6 forward perspective. Losing out on Scott Hartnell isn’t going to cause the entire Blue Jackets team to stink. Rather, this is a question of the team losing value at the margins. The top 6 (or even top 9) forward lineup looks decent. Not Crosby-Malkin level, but no team outside of Pittsburgh can claim such riches.

At issue: the top 9 forwards don’t play all 60 minutes. How the Blue Jackets plan to allocate the remaining 9-12 minutes per game is important, particularly in a league with few obvious bottom-feeders. Last year, Columbus won those minutes with ease thanks to Scott Hartnell’s contributions creating one of the best fourth lines in the NHL.

Let’s consider the raw totals: Scott Hartnell’s 37 points were tied for 151st among all forwards in the NHL (via H-R), and his 13 goals slotted him in 182nd among forwards (also via H-R). In a perfect 30 team league (a total that changes this year), franchises only get 5-6 point scorers, or 6-7 goal scorers per team to perform at that level. That’s not something to scoff at, and the Jackets will need career performances from vets or strong debuts from newcomers if they want to replace all of Hartnell’s production.

Looking at another angle: Scott Hartnell also dominated from a shot metric perspective. Hartnell was fifth-best on the Blue Jackets in even strength CF% (via Natural Stat Trick), beaten only by Brandon Saad, Sam Gagner, Zach Werenski, and Seth Jones.

Hartnell’s year becomes even more impressive when considering his impact on teammates. Using Hartnell’s player page at Natural Stat Trick, we can look at the CF% each CBJ player had when playing with Hartnell, and then playing away from Hartnell. I’ve created a graph below.

The x-axis: CBJ players, listed left-to-right in decreasing order of TOI played with Hartnell (Gagner played the most with Hartnell, Calvert the least). The y-axis: the CF% of each CBJ player when with Hartnell minus the CF% when on ice without Hartnell. If the value is positive, the player got a boost from Hartnell time. If negative, the Hartnell playtime was a negative impact.

The specific indications from any single player aren’t so important here. Rather, let’s look at the general trend: most CBJ players had improved shot metric performances when playing alongside Scott Hartnell.

From a philosophical perspective, we can consider Hartnell’s performance as a twofold benefit for the 2016-17 Columbus Blue Jackets. First, the fourth line occasionally potted goals for the Jackets, an obvious good thing that isn’t always a given for depth players. Second, and maybe more important, the fourth line was nearly always winning the shot battle which meant other weak opposition was rarely scoring goals.

In 2016-17, the Eastern Conference playoff cutoff was 95 points. Changing seven of last year’s CBJ wins to losses would be enough drop the Jackets out of contention. You’ll recall those 50 wins required many things to line up perfectly. What happens if Bobrovsky is merely “excellent” instead of “otherworldly?” What if the powerplay is simply “good” instead of “red hot fire machine” to start the year? With a baseline closer to the playoff bubble, it’s much easier to envision the importance of fourth line forward depth to the Jackets’ season-long goals.

I don’t intend to make this seem like a criticism of the Hartnell buyout itself. Financial concern was valid, and Scott Hartnell is 35, well outside expected prime age and headed toward the end of his career.

The issue instead: how do the Jackets plan to bolster their team depth without last year’s Hartnell around?

Earlier this summer, Jeremy shared some of his work in developing a expected goals model. His article is well worth exploring, and begins to poke at some of the answers the team might need. The loss of Hartnell (and Saad and Gagner) doesn’t get replaced immediately.

Using the final preseason lineup as a guide, here’s a how the Blue Jackets forwards might look (when Josh Anderson is officially installed).

Without Hartnell’s great depth performance, there are now question facing the new-look fourth line. Was Sedlak’s great rookie year largely dependent on playing alongside Hartnell, or can he hold up on his own? Will Josh Anderson’s point performances continue to fly high, or does his performance come closer to his AHL/OHL numbers? And can Anderson’s unimpressive CF% improve? Will Zac Dalpe or Markus Hannikainen stick in the NHL for the first time, and how will they perform during the rigors of the season? And what happens when Boone Jenner returns and shifts the forward lines?

That there are so many unanswered fourth line questions is a concern, and speaks to just how big a hole is left without Scott Hartnell. Ready or not, the Blue Jackets will start to get their answers on Friday against the Islanders.