10 thoughts on the Blues opener, food and renovations at Scottrade 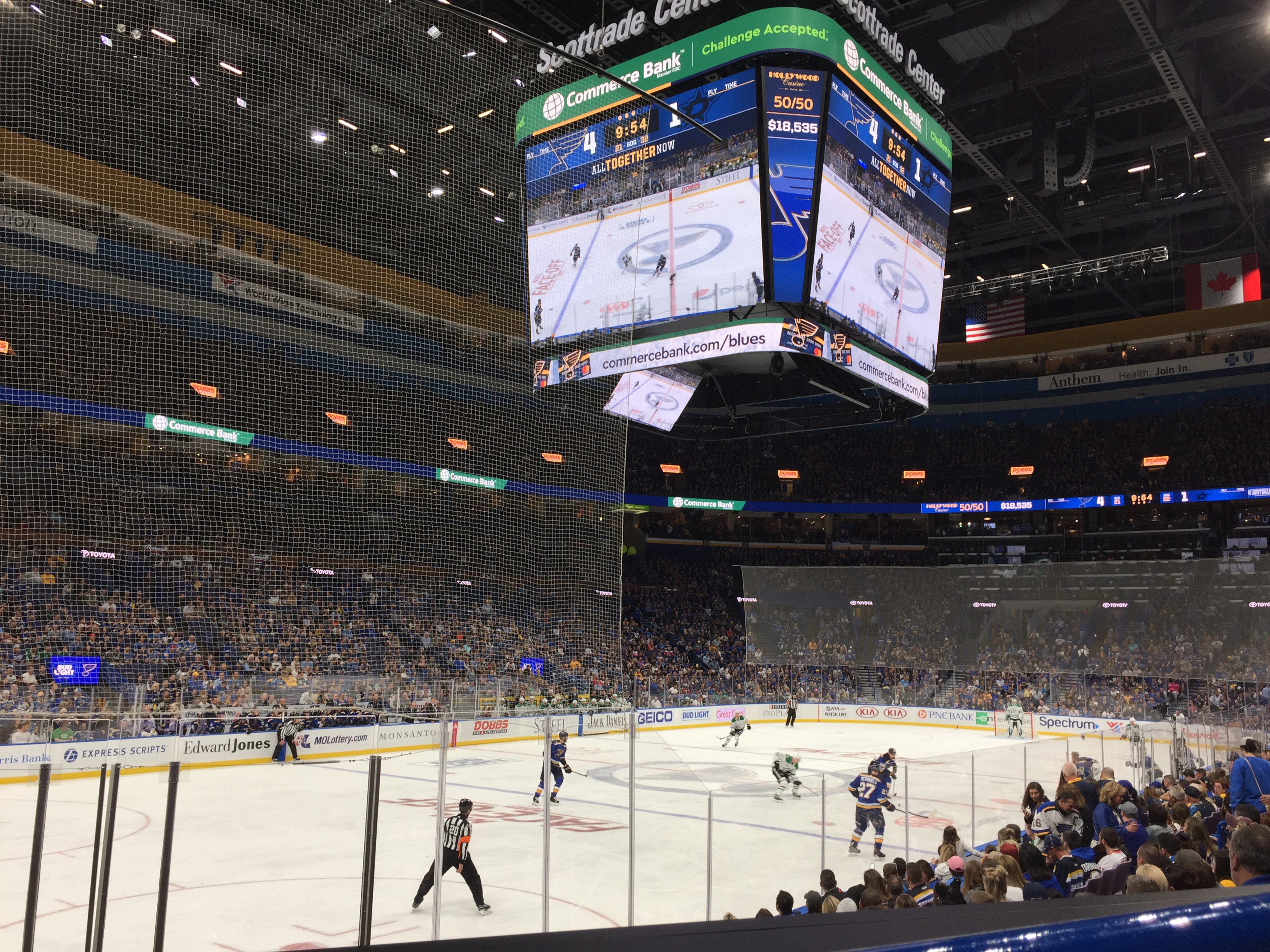 10 thoughts on the Blues opener, food and renovations at Scottrade

The St. Louis Blues are off to a great start this season, picking up wins in Pittsburgh over the Penguins and winning their home opener against the Dallas Stars. I was fortunate enough to be in attendance for the home opener and I thought I’d offer up some thoughts both on the game and on the overall experience.

There was a lot of positives, but unfortunately a handful of negatives.

The Blues wanted to show off some of their new technology and boy, did they show it off. Prior to the game, the team flexed its new muscle, introducing their new scoreboard, AVA, which I believe they said stands for Audio Visual Assistant. They first used the new scoreboard to show what the old one looked like. Believe me, the new one is enormous, but it’s insane to see a direct comparison of the two at the same time.

During their introduction, they shot fire off of the top of the board. It was awesome, but that was the only time that it happened, which was kind of surprising. Maybe they were just trying to illustrate what’s possible? Still, if you can do it once, why not make it a regular thing? Maybe the team is still feeling out the best overall showcase to give the Blues an identity, rather than copying what other teams do. Wishful thinking.

The new scoreboard (don’t call it a jumbotron, it doesn’t like it) is a great enhancement to the live game experience. If the puck is low in a corner and you can’t see it from your seat, AVA has a great view that’s difficult to miss.

The arena also features new LED boards near the benches as well as above the Zamboni entrance. There’s also an LED board above every tunnel, which can create a hell of a show when they’re all being used.

There are a few slight adjustments which could be made (make the shot total larger, stop showing replays during play and wait for a stoppage, etc), but it’s a huge, huge improvement.

The new food options are pretty nice, but they have a lot of kinks to work out. For instance, roughly half of the lower bowl has these new food options from local restaurants all in a row. Each station is serving a few niche items off of their menu, departing from the usual food you’d find at the concessions. That’s both good and bad. If you are hunting for the normal concession items, you have to hunt them out and you have to plan on a reduced menu. This may only be the case for a few sections (I was in 119), but it’s worth knowing that you’re in for a hike if you want something more traditional.

Related, currently there are kiosks and the new stands (which replaced old locations of regular concessions) directly across from one another. These new options take considerably longer, which translates to longer lines. These long lines overlap, creating an insane crowd which is very difficult to pass even during play when the lines should be manageable.

For instance, it took a little over five minutes to travel the equivalent distance of one section. That was during play, not an intermission. The overall configuration and line planning needs work.

Also, due to these stands being essentially independent of one another, basic items such as ketchup are tough to find. I noted a couple locations in the concourse which used to have ketchup/napkins/etc which were now empty because each independent stand is supposed to provide their own. That’s far from a user friendly experience.

One other complaint was with fountain soda. The independent stands had fountain soda. The normal concession stands (at least, several spread apart on the lower level) did not. They were only selling bottled soda and had removed the flavor stickers off of their fountain soda dispensers. Meaning, if you wanted a fountain soda, you had to wait in one of the extra long lines. Seems like a bizarre issue (change?) to have on opening night. If this is a permanent change, it’s going to tick off a lot of people.

With all of that in mind, it came across that Scottrade was outsourcing some of their concession space to cut down on expenses. That’s a shame, as there should be a way to provide both without the customer noticing lots of problems.

Hopefully this was just a poor showing on opening night.

Some of the other upgrades around the arena include renovated bathrooms, new lighting and sound. All are great changes.

The Blues made the most of their new sound system, blasting loud music (some did seem to think it was too loud) throughout the game. There was a shift in the type of music as well. WWE music played a large role, as did a good selection of rock. The stereotypical pop or dance music was fairly limited.

The lighting is noticeable if you look for it. Everything seems brighter and the team showed off before the game that the standard lighting can put on a show all by itself. The concourse lighting (and overall appearance) needs work.

The bathrooms looked pretty nice, albeit fairly generic. There is a little shelf above the urinal to hold your drink, which is a pretty thoughtful touch.

I’m not sure what the broadcast showed, but the kids and players had a hell of a time coming out with the fog. There was a small carpet to walk on that kept getting bunched up. Add that with the fog and you have kids eating it while trying to walk out.

They quickly turned off the fog machines, which did lessen the “cool” factor, but it’s better to do that than to have an injury.

This was the view from my seat. Pretty awesome, I have to admit. However, it was kind of weird having a huge bundle of cables and wires (10+ black cables) running in front of your feet, not secured. Just a reminder that the Scottrade still needs a lot of work.

In-game entertainment should be a supplement to the action on the ice. It’s only when it’s missing a beat that you really notice it.

Angella Sharpe’s role has been reduced to intermission work while the Blues hired Pascal Beauboeuf to serve as a co-host during stoppages. Pascal was fine, but he seemed extremely nervous, stumbling over some of his words while failing to bring anything exciting, or worthy of a change, to the table. Meanwhile, it’s kind of a bummer to see Sharpe’s role slimmed down. She really is one of the nicest people.

Instead of a game or some kind of second intermission entertainment, a Zamboni with seating for 10+ people came out. That’s not exactly entertaining, particularly for a home opener.

You’d think the team would throw their strongest foot forward at the home opener, but things still feel a bit off. There’s so much room for improvement, particularly now that the arena boasts better technology.

Offense from the Defense

I’m not sure where all of this offense from the team’s defense is coming from, but I’ll take it. Alex Pietrangelo already has two goals and two assists. Carl Gunnarsson has a goal and an assist. Colton Parayko and Joel Edmundson also have a goal to their name.

Considering the injuries to team’s offense, it’s awesome to see the defense step up.

What’s driving the change? In a limited sample, the Blues appear to be more willing to bring their defensive players forward. Instead of camping out at the blue line, the team’s D is moving up the ice and positioning themselves in more high-risk, high-reward areas. So far things are paying off.

Blues fans may not agree on everything, but they all could agree that the Blues had to have Allen from the playoffs as opposed to Allen from the regular season if 2017-18 was to get off to a good start.

It looks like Allen from the playoffs came to play.

More of this, please!

No, I won’t tire of this completely unfair comparison.

PITTSBURGH, PA – OCTOBER 04: Oskar Sundqvist #70 of the St. Louis Blues skates with the puck against the Pittsburgh Penguins at PPG PAINTS Arena on October 4, 2017 in Pittsburgh, Pennsylvania. (Photo by Matt Kincaid/Getty Images)

It’s early, but it may be time to try something new on the third line. It’s not that any of the three players above have been particularly bad, but they haven’t made much of an impact. Thompson is still feeling his way through the NHL and Sundqvist looks to be on the outside, watching the play develop. Paajarvi has tried to get things going, but he’s missing some needed support.

I’d imagine other faces will see some time (Wade Megan) sooner than later.

Everyone needs to stop trying to compare Chris Thorburn with Ryan Reaves. They are completely different players who really can’t be compared. They both will drop their mitts and fight, but Reaves is the more complete player who can chip in on offense. Thorburn is the more tradition enforcer who will struggle to do much on offense.

It’s easy to try and draw a line between the two, but there really isn’t one.