#RallyTogether 2017 ALDS Game 5: Yankees Out hit, pitch and field Indians to move on to ALCS 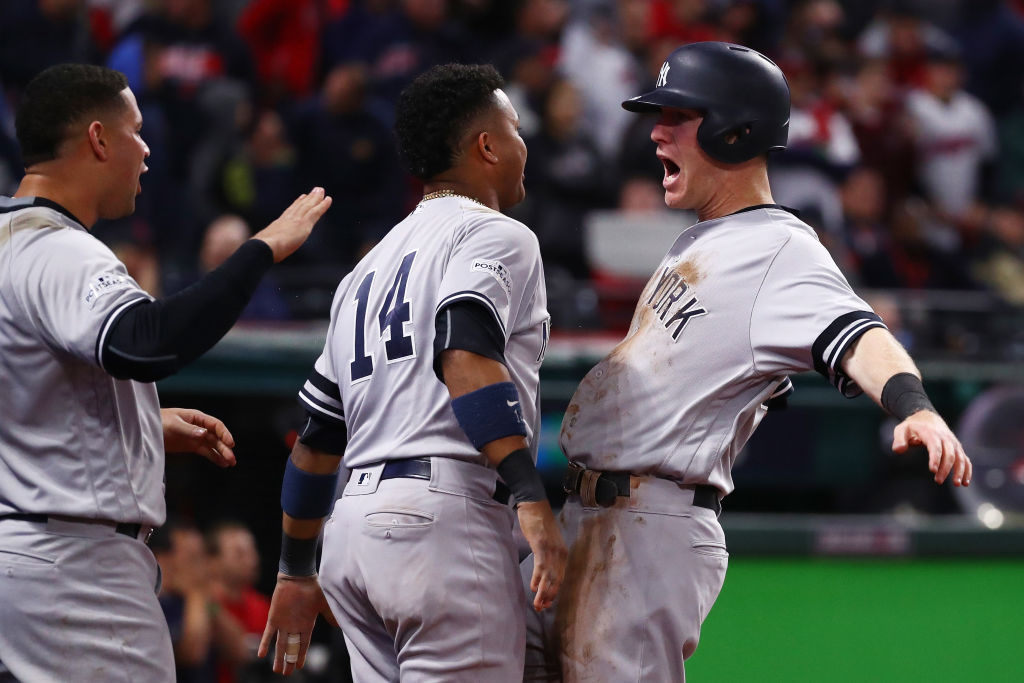 #RallyTogether 2017 ALDS Game 5: Yankees Out hit, pitch and field Indians to move on to ALCS

Brett Gardner tried a bit of a sneak attack to start the game, bunting down the first base line on the first pitch. What he wasn’t prepared for was how nice of a defender Carlos Santana has become and Gardner was the first out. Corey Kluber then got to work and struck out Aaron Judge. After getting ahead to Didi Gregorius, however, he left a fastball inside and the Yankee shortstop crushed it out to right for the first run of the game. Kluber would finish off the inning with a strike out of Gary Sanchez, but the Indians would come to the plate for the first time already down one.

CC Sabathia struck out Francisco Lindor and Jason Kipnis to start the bottom half of the first, then got an easy ground out down the third base line to retire Jose Ramirez and end the inning.

As in the first, Kluber quickly worked through the first two batters in the second, striking out Greg Bird, then getting Starlin Castro on a grounder up the middle. After getting Aaron Hicks down 0-2, Kluber lost control and walked him after which, Roberto Perez allowed Jacoby Ellsbury to reach on catcher’s interference. This time Kluber wouldn’t give in as Todd Frazier flew out to right to end the frame.

Edwin Encarnacion made his return to the Indians line-up for the first time in three games after spraining his ankle in game two. The big slugger gave one a ride that went foul out to left, but ultimately struck out swinging. CC would get his fourth K of the game later in the inning as Austin Jackson went down looking on a couple balls that were well outside of the strike zone.

Gardner decided to swing in his second at bat and ripped a ball into right for the second Yankee hit. Then, for the second time in as many at bats, Judge struck out swinging against Kluber. While Kluber had no problem setting down the Yankees biggest slugger in either start, Gregorius would get him again in his second at bat, this time taking a low curve out to right for a second time. This time, it was worth two runs and the Yankees grabbed a three run lead. Just as he did in the first, Kluber then struck out Sanchez and finished the inning when Greg Bird grounded out.

CC would continue his stretch of striking out two batters per inning in the fourth as Jay Bruce and Giovanny Urshela went down swinging. In between, there was a very odd play as Roberto Perez attempted a bunt back to Sabathia that CC caught in the air for the second out, dropping down to his knees and tearing up the turf in the process.

Kluber struck out another to start the fourth as Castro went down. Hicks made a loud out to center before Kluber walked Ellsbury, effectively ending his night after just 3.2 innings. Andrew Miller would then come in with two outs and a runner on first. He struck out Frazier to end the inning, but the Indians were still down 3-0 despite using their top two pitchers just to get through four innings.

Lindor banged out a single to start the fourth to make sure that Sabathia didn’t get a perfect game. Kipnis then struck out looking, Ramirez grounded out on the first pitch and Encarnacion was called out by home plate umpire Jeff Nelson on a pitch that would be a ball if any team other than the Yankees were in the field.

It took 12 pitches, but eventually Miller would strike out his second batter in Gardner to lead off the fifth. It was a much easier four pitch at bat for Miller to strike out Judge as he went down swinging for the third straight at bat. Gregorius had already hit a Kluber fastball in and a curve low and in his third at bat, he hit a Miller fastball on the outer half of the plate for a single to the right. Miller would stay in to finish the inning, though, as Sanchez grounded out to third.

Santana struck out to start the fifth, but Jackson would get his revenge for a called strike out earlier in the game with a single to left center. Bruce made it two straight with a single to right and Perez continued the trend with an opposite field hit that scored Jackson from second. Urshela followed him through the right side with another single that brought home Bruce and drove Sabathia from the game despite the incredible start.

Replacing Sabathia was David Robertson and, after the pitch pictured below, Lindor grounded into a double play and ended the scoring threat.

Miller continued on against New York, now down just one, but in his second full inning. Miller struck out Bird to start the inning and Hicks for the second out with a Castro single in between. This gave Miller five strike outs in eight batters faced, but it would also be the end of his night as he gave way to Bryan Shaw. Shaw would strand Castro by striking out Headley, the Indians 12th K of the night.

Kipnis lead off the sixth against Robertson and was out on a chopper back to the pitcher. Ramirez matched him with a ground out to second and Encarnacion made things interesting for a moment when he smashed the first pitch to deep center where it was caught by Hicks.

Shaw stayed in for a second inning and retired Frazier on a fly ball to center. Gardner singled up the middle for his second hit of the night, but Judge would strike out for the fourth time and Perez would nail Gardner trying to steal for the inning ending double play.

Robertson stayed on for his second inning in the seventh and got both Santana and Jackson swinging to start things off. Bruce then worked a questionable walk thanks to the amorophic strike zone, but the strike zone switched sides on Perez and the Indians catcher ended up grounding out on a check swing.

Incredibly, Shaw came out for the third straight inning as both teams extended their elite relievers. He did the impossible by getting Gregorius to ground out, then struck out Sanchez (something shown very possible this series) before yielding to Cody Allen. The Tribe closer struck out Bird to end the inning, keeping the game within one for the Indians offense.

As expected, Allen came back in for the ninth and struck out Castro swinging on a ball in the dirt to start the inning. Hicks singled with one out, but Jackson misplayed the ball in left and allowed him to take second on the error. Headley then popped out to second, keeping the runner in place. Frazier worked the count full before an errant pitch from Allen put him on base. After an incredibly long at bat, Gardner singled to right and brought home two runs thanks to a poor play by Lindor trying to catch the throw in from Bruce.

While both runs were unearned, they pushed the Yankee lead to three. Joe Smith came in to finish the game for Cleveland and pushed Judge to an 0 for 5, but the damage was more than done.

After the long break, Chapman came back out to face Ramirez and walked him. Encarnacion then was caught looking at a pitch with a lot of the plate, but 101 MPH behind it. Santana also looked at a couple in the zone before hitting a high bouncer to second that was nearly a double play. Instead, Santana was safe at first with the fielder’s choice. The final at bat of the Cleveland Indians season would end on a pitch that was unquestionably out of the zone high as Austin Jackson struck out looking.

On Deck: We’ll see you next year.