Your Morning Dump... Where S my D is a good investment 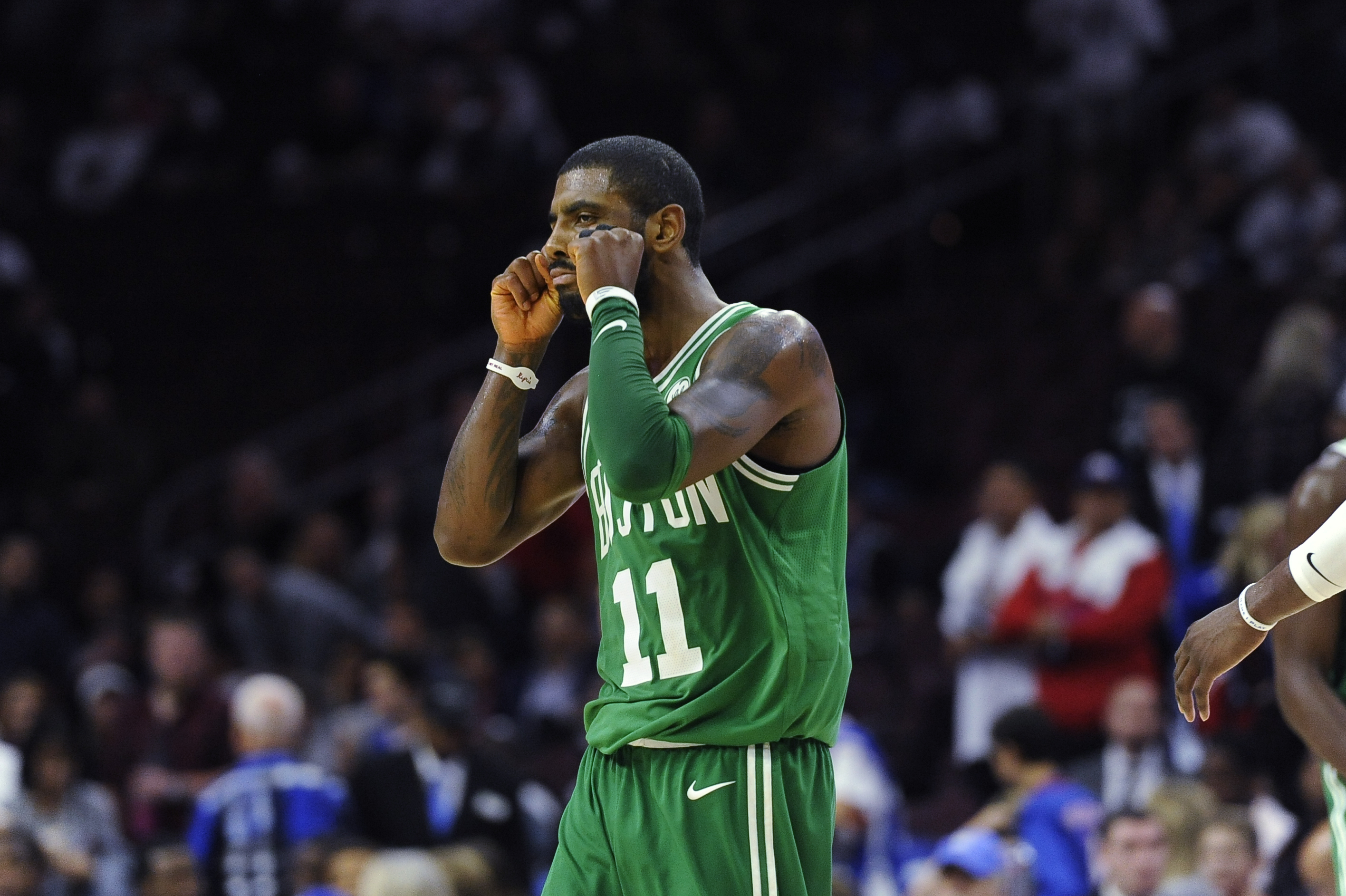 Your Morning Dump... Where S my D is a good investment

Boston Celtics guard Kyrie Irving took full responsibility for the lewd comment he made to a heckling fan Friday night, but said he does not regret the exchange itself.

[…] “If he’s man enough to record it on video, then that’s on him,” Irving said. “I’m glad he got his (social media) name out there and his kind of five seconds of fame and going viral. That’s the social media platform we live on. I take full responsibility what I said and excuse the kids at home and you move on.”

For those who haven’t seen it, here’s the video:

You can’t make that suggestion without it costing you. There is a fine, usually $25,000, for inviting a fan to fellate you. Afterwards and in practice yesterday, Kyrie took full responsibility for it.

For Celtics fans, cursing out a fan taunting you about LeBron is an instant way to become endearing.

Well. It was $25,000 fee to make celtics fans fall in love. It was a expensive large scale morale boost.

That’s just one of many replies to my and others’ tweets about this situation… so most people are putting a positive spin on this. The LeBron taunt is going to be there, Celtics fans generally hate LeBron, and this reaction would generally be their reaction too.

However (you had to know there was a however coming)…

Let’s not make a habit of this. Asshole fans are going to keep throwing “LeBron” at Kyrie now that they know it gets under his skin. One “heat of the moment” mistake is ok… but we’ve got to move forward without this becoming an issue. Those dickheads are looking for a reaction… giving them anything will only bring more of them out next time.

While Larkin and Bird certainly deserve praise for coming up big in their stints, just as much credit has to go to Stevens for pushing the right buttons while staring at the prospect of an 0-3 start to the season. How many coaches would have had the gall to go with a two-way rookie who only played 28 preseason minutes, and with a third-string point guard for crunch time minutes in such a big spot?

Stevens not only isn’t afraid of trying unconventional combinations like that, he’s also not afraid to stick with them. Bird played 12-straight minutes in the second half while Larkin handled the ball for several possessions in crunch time instead of deferring to Irving. It took him awhile, but the head coach found the right formula to beat a hungry Sixers team and perhaps put his team on the path back to normalcy with the returns of Smart and Morris looming next week.

It’s hard to imagine the Celtics being in a tougher situation to start the season. The Celtics specifically went to Newport to fast-track their chemistry building. They tried to work Marcus Morris into the mix slowly. They did everything they could to ease into a rough early schedule.

Luckily, Boston’s coach is a magician and the Philadelphia 76’ers are still bad. Stevens called on a kid who was packed for his G-league training camp to come help avoid and 0-3 start to the season. When the Celtics needed meaningful minutes, Brad Stevens trotted out a guy on a two-way contract, a guy who wasn’t in the NBA last season, a rookie, Terry Rozier, and Jaylen Brown.

Some of it was desperation. Without three very important guys, someone had to step up. Stevens had to find someone to take advantage of the moment. And he did.

This is how legends grow. Over time people will strip away all the mitigating factors here….

Philly isn’t good and definitely isn’t good enough to overcome a bad game from Joel Embiid. And it’s the players on the floor who had to perform. If Bird and Larkin don’t make some of the plays they did, then the headlines get very different.

But they did, and Stevens gets the credit for getting ANOTHER group of guys who shouldn’t be doing what they’re doing to do what they did.

Because Brad is magic.

Giannis Antetokounmpo lost his father suddenly during training camp. Last night, he scored a career-high 44 points to beat Portland. And then… he gave his father the game ball.

I don’t know if playing for the memory of his father is fueling Giannis further than normal, but he’s off to an amazing start to the season. We saw him decimate the Celtics last week, but that was just the start. He went for 34-8-8 on 15-22 shooting against Cleveland and then 44 points on 17-23 shooting last night. He’s storming out of the gates averaging 38.3 ppg, 9.7 rpg, and 5 apg on 67% shooting.

Those are obviously unsustainable numbers, but that’s probably going to earn him Player of the Week… quite possibly the first of many this season.

Giannis is elevating himself to one of the most fearsome players in the league… and he’s doing it without a long-range game. Of his 67 shots, only six have come from 3. If he ever develops that part of his game, he will own the league.

He turns 23 in December. TWENTY THREE. LeBron is still LeBron but he’ll slowly diminish over the next few years. Kevin Durant is still KD but eventually he’ll start to turn the corner as well.

Antetokounmpo is only just scratching the surface. He’s still maturing and adding to his game. He’s going to get a lot better.

As Boston continues to build out its roster and look towards the future, it could very well be Milwaukee standing in the Celtics’ way instead of Cleveland.

NBC Boston: Celtics get started on how it’s going to work now

Globe: Bob Ryan: A few thoughts in the wake of the Gordon Hayward injury

ProJo: It’s back to drawing board for Celts