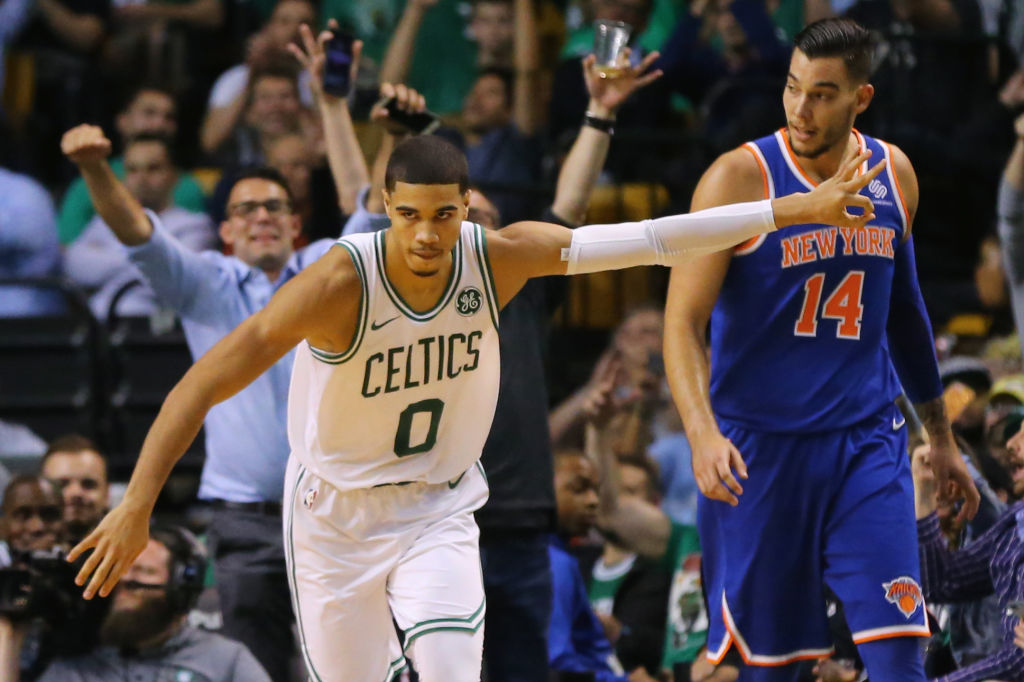 The higher Kristaps Porzingis continues to fly, opposing teams are going to be all the more motivated to make adjustments and yank him back down to earth. Following two 30+ point performances to open up the season, the Celtics knew exactly what they were getting into on Tuesday night. But unlike the Pistons in game two, it didn’t take them until the second half to go after the Knicks’ budding star the right away. Instead, they shut him down from the opening tip, playing a physical brand of basketball that Porzingis isn’t fully used to just yet.

Still embracing being his team’s primary option on offense, Porzingis is getting acclimated to all the pressures that come along with such a role. Boston limited his space to get things going: they closed out around the perimeter and made sure he didn’t have the freedom to roll out any effective post moves. Porzingis was pushed, prodded, and certainly wasn’t the benefactor to as many foul calls as he deserved. The Celtics frustrated him, pestered him down low, and made him ineffective. Porzingis shot 3 of 14, but he most definitely wasn’t alone in struggling during New York’s 110-89 blowout loss in Boston.

Tim Hardaway Jr. looked to be the player of old that the Knicks gave up on way back when. His 2 of 11 shooting night proved him to be sloppy and overzealous as he failed to find a rhythm. When a team’s top scorers are both out of sorts, it makes it difficult to have any hope for a victory. Enes Kanter added 16 points and 19 rebounds, but his efforts on the offensive glass (9 offensive rebounds) were seemingly in vain because New York was unable to capitalize on much of anything, let alone second chance buckets.

The Knicks had little to no offensive flow, but they had even more problems on the defensive end. Kyrie Irving doesn’t need to be perfect to be effective, and his strength, penetration, and orchestration went uncontested by a weak Knickerbocker backcourt. Ramon Sessions is by no means quick enough to stay in front of Irving and disrupt his game. Boston pushed the pace and things clicked rather quickly. They made it rain, shooting 48% from downtown. Rookie Jayson Tatum led the way with four daggers from deep, proving that he’s going to be an incredibly special player. Ben Simmons may be the more versatile talent and Lonzo Ball may be a very savvy and unselfish floor general, but Tatum has all the tools to become an elite NBA scorer and he put many of those on display against the Knicks. Tatum was strong in slashing to the basket and downright undeterred when it came to knocking down multiple catch and shoot opportunities. His confidence was unwavering, and it showed. Al Horford’s (13 points, 13 rebounds, and 5 assists) skillful passing continues to be the most unrated component of his game. His vision in the post, and ability to help his team spread the floor, is so valuable in catching opposing defenses off guard.

Even without Gordon Hayward and a team that looks almost nothing like last season’s number one seed in the Eastern Conference, the Celtics look like a team gunning for a repeat. Clearly not on that level, the Knicks were no match in this one.

If there was any silver lining to New York’s third straight defeat, it’s that Willy Hernangomez made a rare appearance and put together some very solid offensive minutes. Tallying 12 points in 11 minutes, the big man was excellent in the pick and roll and proved he hadn’t missed a beat from the positive things he began to do last season. The Knicks need to fit him in the rotation, sooner than later.