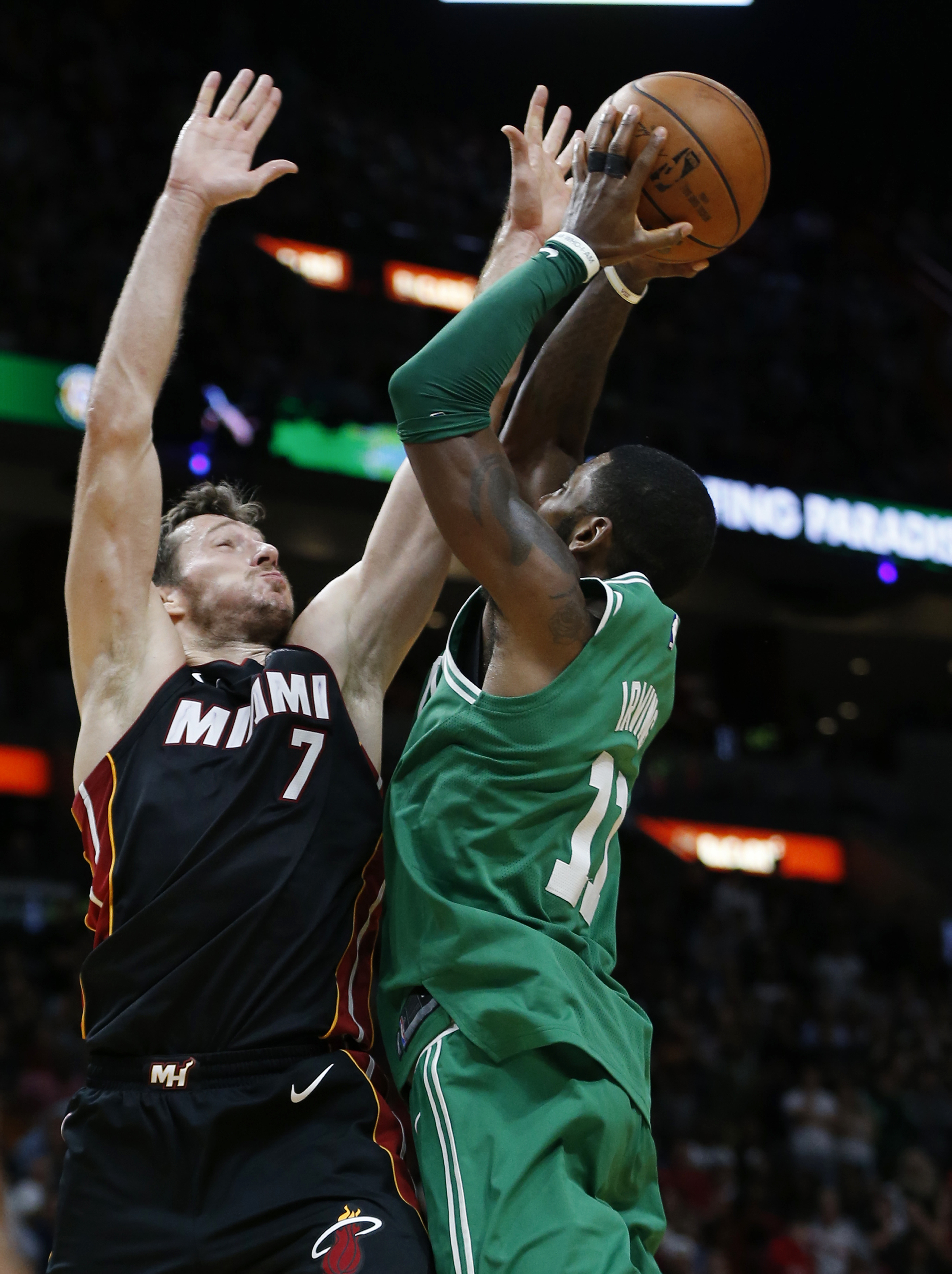 The Boston Celtics weathered a tropical storm (ANOTHER PUN RIGHT AWAY!) and beat the Miami Heat 96-90 in front of a sparse crowd of, I’m guessing, 374 people.

If the Celtics had everyone they would have won this game by a ton. They threatened to win the game by a ton. They didn’t win by a ton. They needed Kyrie to Kyrie and Tatum to tantalize. In the end, though, this was a fun win, and the fourth straight after a couple of losses to open the season. They are now 4-2, and they only trail Orlando in the way-too-F’ing-early-why-am-I-even-mentioning-this standings.

The first quarter was back and forth… Celtics down five… then up six… then down five again… which is where they ended the first quarter. Jayson Tatum had an efficiently beautiful quarter, hitting all three of his shots (a three, a putback, and a layup). Al Horford had a nice five point/three rebound quarter. Miami countered a 10-0 mid-quarter run with a string of hot shooting. They shot four of seven from three and 50% overall in the first.

Marcus Smart scored eight straight points in the first few minutes of the third quarter and the Celtics pushed their lead up to as much as nine.

Celtics have outscored Heat by 18-6 margin this qtr, mostly with a Larkin/Rozier/Smart/Brown/Theis lineup.

But Miami came all the way back to tie the game on a Dragic step-back and string of free throws, one of them after a BS flagrant-one on Al Horford.

That was a hook. An offensive foul for sure. That was not an attempt to elbow anyone in the head.. and if you look that was Al’s triceps that hit Richardson. Al got that flagrant because he’s tall.

Anyway, Miami screwed up the clock management at the end and Boston capitalized on a last second shot to take a two point lead into the half. Smart’s early run pushed him into the scoring lead with 12 at halftime.

The Celtics started the third the way they started the second… on a run. A seven-nothing spurt  put them up eight. That lead was extended to 11 by the end of the quarter thanks to nine points from Jayson Tatum. Three of those came on a three that looked like this:

Way to defend the line, Miami.

The Celtics shot nearly 53% for the quarter while holding Miami to under 37%.

But of course, the Celtics aren’t content to [insert cliché about putting a team away]. The lead dropped all the way down to two with just a couple of minutes left in the game. But Boston quickly pushed that back up to seven with a Kyrie Irving layup and three. Kyrie scored the Celtics final nine points of the quarter to seal the win.

The HOT… and not…

Jayson Tatum: My grown adult son who absolutely can’t be my actual grown my adult son so don’t google it had a low-key awesome night. This kid has a strong chance at being the best player in this draft, which basically allows Danny Ainge to walk into any bar in New England and demand the finest non-alcoholic, faith-approved beverage he wants.

Sure, we can make the jokes about Mormons drinking milk, but Tatum allows Ainge to demand you milk the cow and Pasteurize the milk yourself. You owe him that much.

Kyrie closed the game in pure Kyrie fashion. It seems like he’s spending the early part of the season letting others go off and he’s stepping up as needed. He has taken over down the stretch of the past couple of games… which is fitting nicely into what this team needs post-Hayward injury.

Al Horford is a potion who exposes basketball knowledge. If you watched tonight’s game and thought he sucked, then you (a) have CTE or (b) host a drive time show on Boston sports talk radio. Those are the only two options. Horford is having an amazing season so far.

Aron Baynes blocked 94 shots tonight (my computer with the stats went to sleep so I’m going by memory here)… all of them were with his forearm.

Jaylen Brown’s stat sheet is amazing because my eye-test says he had a quiet off night (6 points, 1-7 fg, 5 reb, 4 TO) but guess who was a PLUS 18 ON THE NIGHT??? (If you didn’t just guess Jaylen Brown, then you’re probably also the person who thought Al Horford sucked).

Special shout out to Tito 3 sticks who continues to play some damn fine basketball.

Marcus Smart from 3… turns around.. "fuck you man" pic.twitter.com/WZ3WH7kkym

Sit down. Be Humble pic.twitter.com/g4UZcH8X0K

WHAT THE HELL WAS THAT???

I’m too lazy to add Yakety Sax to this so play this video first the click on this tweet.

This sequence is a thing that happened pic.twitter.com/50QdfGWPuv